The new Alien film, Arrival, not to be confused with Mid 90s movie, The Arrival, is a 2016 American Science fiction film directed by Denis Villeneuve and written by Eric Heisserer. It is based on the 1998 short story “Story of Your Life” by Ted Chiang. It stars Amy Adams, Jeremy Renner, Forest Whitaker, Michael Stuhlbarg and Tzi Ma. Despite the fact that this movie is starring Louis Lane and The hawk eye teaming up to deal with aliens(SPOILER ALERT!), there are no giant Aliens shooting lasers and destroying cities. Arrival is more like the Anti-thesis of the Independence day sequel. Where as that was an overblown spectacle, this movie is a more subdued take on “Aliens meet Humanity”. So, there’s a huge question which makes up the core of this movie: Why are they here? It’s even written on the poster. This makes up the central idea of the movie. 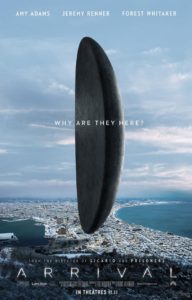 Our story begins with introducing linguist teacher, Dr. Louis banks, and her daughter, Hannah. We see several scenes of Hannah as she grows up to be a teenager and succumbs to cancer. This is not only the introduction to the main story but also a clue to the core of their idea which is explained through her name, Hannah. Hannah is a palindrome (It is read the same forwards and backwards), therefore has no beginning or end as both ways are correct.

Then we see Dr. Banks in the present day. While she’s taking a class in college, the world is shocked to know that 12 shell like alien structures suspended themselves in the sky in various cities across the world. Several days pass as everyone tries to figure out “Why are they here?” Are they here to attack? or to help? Col. Webbers contacts Dr. Banks, to help them translate the alien language which they record when they somehow manage to communicate with the Aliens. And this is what ties Dr.Banks to the rest of the movie.

I love the fact that 90% of the movie is about them trying to translate what the aliens are trying to say and what makes it interesting is the fact that they use a completely different form of communication via weird circles. Also, the aliens in this movie unlike the traditional aliens in other alien movies, are more realistic; they don’t look like humans. Instead, they have seven legs(Heptapods) and can only make weird sounds, which makes sense because they are not from earth and they cannot evolve in the same way as we did. So, when they are trying to communicate it is not like learning french or something, it is a completely new form of communication. The aliens use a language which is not linear (Hence, the circles) making it difficult to identify the beginning and the end.

Amy Adams gives a great performnce in this movie. Jeremy Renner, also did a great job but Amy adams’ is the lead role in this movie. This movie is a little slow because every 18 hours the scientists go into this gravity shoot inside the UFO and communicate with them and then come back down and discuss the findings and then go back up and improvise. And inside the UFO there will be a big hollow room with a glass seperating the scientists from the aliens, making it clear that the Aliens cannot survive in our Atmosphere and they are completely different from us. But the fact that the aliens built a room in their UFO which is fit for human survival makes it clear that they did not come to earth to kill anyone. Infact, they wanted to communicate with us. What’s most intriguing about this movie is that the fact that this movie is a science fiction with more emphasis on science than on relationships or love or sacrifice. It gave me exactly what I wanted from it: Science and Sense. Although this movie is mostly about trying to communicate with Aliens, it really is a message about us, Humans, and the way we try to interpret things. The movie is surely going to make you feel awe at several occasions 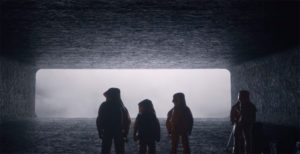 This is a Sci-Fi movie but not an Alien-invasion movie. It’s an interesting movie about Humanity with Aliens coming to earth so as to help us win a war that was going to come in a few 1000 years. A part of the movie might seem a little confusing at first. But if you watched interstellar or inception and could understand them, this is no big deal. At the end everything makes sense and the viewer will be left with a feeling of awe about how the story tied everything together. I think this is one of the best well-directed Sci-Fi movies I have ever watched and I give it a 5 out of 5 stars for making sense and reaching my expectations.

Imagine a clean world. It does not have war, poverty, or hunger. Fancy a universe out there, that lives in binary- yin or yang, good or bad, black or white. There is no gray area, no room for error or... END_OF_DOCUMENT_TOKEN_TO_BE_REPLACED

Every time my dad and I go on a long drive, we always tend to have serious discussions that range from my career choices to a wrong selection in the Indian cricket team for an important match. On one particular... END_OF_DOCUMENT_TOKEN_TO_BE_REPLACED

If you are given a box, and you do not know what it contains, will you open it? If someone tells you that it is empty and asks you not to open it, will you still do... END_OF_DOCUMENT_TOKEN_TO_BE_REPLACED

On 24th March 2020 at 8 PM, TV screens across India flickered in unison as the Indian government announced a 21-day nationwide lockdown as a preventive measure for the COVID-19 pandemic. This announcement caused a complete meltdown of economies worldwide.... END_OF_DOCUMENT_TOKEN_TO_BE_REPLACED

While great space giants like Elon Musk and Richard Branson are sweating blood to launch rockets for greater causes, this rural kid from India has managed to secretly launch himself to space with no authorization. There’s no way you know... END_OF_DOCUMENT_TOKEN_TO_BE_REPLACED