A wall of Memories- Saksham 2K18 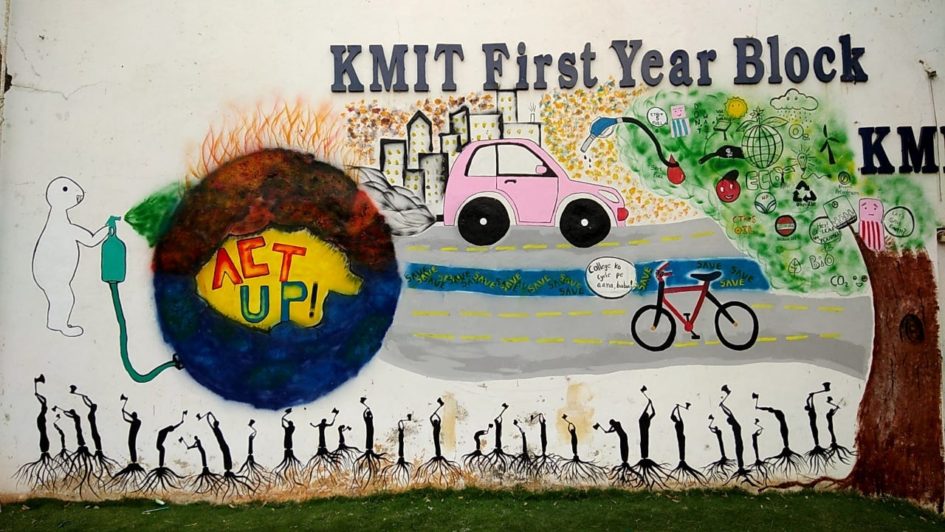 A Wall of Memories- Saksham 2K18

Art, in modern times, has become very essential. Today, it isn’t just a way to earn a livelihood but also a key to social change. It is effective when it is used to create awareness. Money is not what motivates people to create art, it’s the modern mindset.

The Petroleum Conservation Research Association (PCRA) under the Ministry of Petroleum & Natural Gas, Govt. of India conducted an awareness campaign every year known as SAKSHAM (Samkrakshan Kshmata Mahotsav). As a part of this month-long event, art forms such as painting, sketching, wall painting, etc. are conducted in educational institutions. It was conducted in February in KMIT.

Our college, KMIT, gave its students the wonderful opportunity to participate in the graffiti competition conducted as a part of the SAKSHAM event. The event was about making graffiti art on a wall in the college premises. KMIT is one of the ten colleges in Telangana which took part in this competition. It was a group competition and the topic was ‘Saving natural resources’. The students were asked to create a group of 7 members or more and work on it for a whole day.

A team was made from the participants of the “Art Event” conducted on KMIT Diwas with a few seniors. The team included two 3rd year, three 2nd and two 1st year students. I am very fortunate to get such an opportunity to participate in a state-level competition as such. It surely was a great opportunity but there was a risk. We were informed by Vinay sir that the painting would be white-washed if it wasn’t pretty.  We weren’t professionals at graffiti art, but interested in it, so we accepted their word and decided to try our level best.

The concept and the individual roles were decided a day before. In spite of having an exam, the seniors spared time so that we could start working as soon as possible. The seniors didn’t try to impose their ideas onto us but very politely asked Chandana and me, the first year students, if we had any ideas. For sure we worked with some of the coolest seniors. 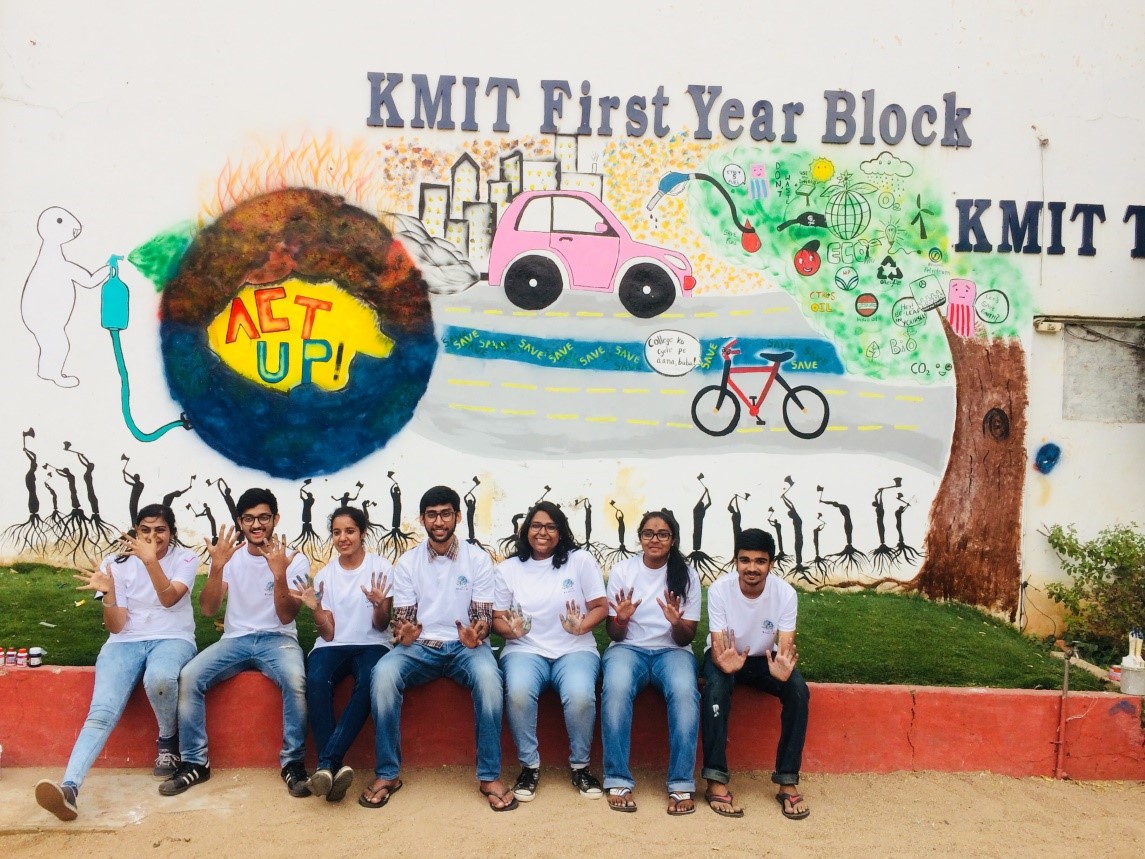 The college funded us enough for all the materials. We bought all the required items like spray cans, acrylic paints, etc. On the day of competition, each of us managed to reach the premises before 8:30 am and started working. Aditya, Ganesh, Chandana, Arpita and I took care of the painting part and Meeta and Divija managed the main graffiti elements. We got enough support and suggestions, from our lecturers and faculty. Nivedita ma’am made sure we were stacked with refreshments.

As we had a deadline, we tried to wrap it up early. We even had lunch in groups of two or three, so that at least two members of the crew would keep the work and momentum going. We cooperated well and had a cheerful time throughout the day. To kill the monotony, we played some music.

Though all of us were happy with the work, we had to be very conscious at every step we took. Around 5:30 pm, we concluded our work. We were exhausted, but the praise kept us going.

Yes, it was a competition, but what actually mattered to us was the fun we had, the joy of painting a wall in our college and the smiles we had when Neil sir said that the wall won’t be white-washed. The appreciation from the faculty and peers was well-received. The feeling was special for Chandana and me as we had done something offbeat in just our first year. 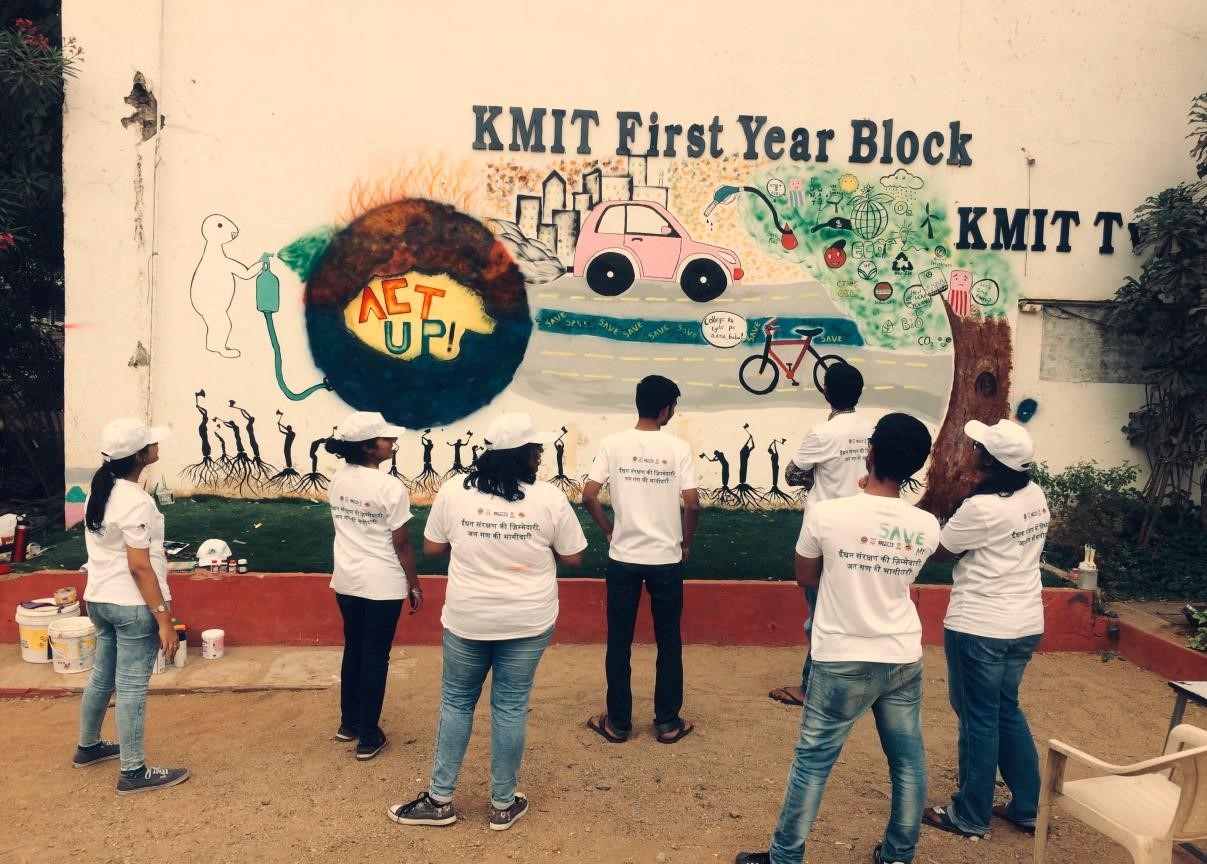 It wasn’t as easy as we thought of it to be, but even we wouldn’t get a chance to paint a wall in our college anytime soon. We had to face a lot of issues as we began to work. The paint was bad, there were patches and cracks in the wall. We had to paint a few sections of the wall before we began the work.

“All writing begins in the sea of experience”― Barry Lane.

I've grown up reading great things about Kashmir's beauty. In one of my textbooks, it’s also called "The Heaven on Earth" or in the local dialect, "Dharti ka swarg Kashmir." From the icy mountain slopes to the lush green plains... END_OF_DOCUMENT_TOKEN_TO_BE_REPLACED

"Animation is not the art of drawings that move but the art of movements that are drawn” ~Norman Mclaren. Some things in life don’t change, like the craze we have for animation. Right from adoring our childhood shows to never... END_OF_DOCUMENT_TOKEN_TO_BE_REPLACED

Love is unconditional. It's received and given in many forms, but it's said that the truest of love is when it's without any limitations. A love for caring about others without demanding much for yourself. The love of acceptance and... END_OF_DOCUMENT_TOKEN_TO_BE_REPLACED

Everyone knows Sushant from his popular movie MS Dhoni- the Untold Story. After MS Dhoni, he was seen in the film Chhichhore, which gave a beautiful message "Suicide is not the solution". Many students found the movie relatable. After Chhichhore,... END_OF_DOCUMENT_TOKEN_TO_BE_REPLACED

Trigger Warning: The following article contains a portrayal of characters suffering from severe mental illness. Readers' discretion is advised.   Jane was driving her away from the glimmer of light towards the darkness, creeping deeper and deeper, until she was... END_OF_DOCUMENT_TOKEN_TO_BE_REPLACED