Uprising at the United States Capitol 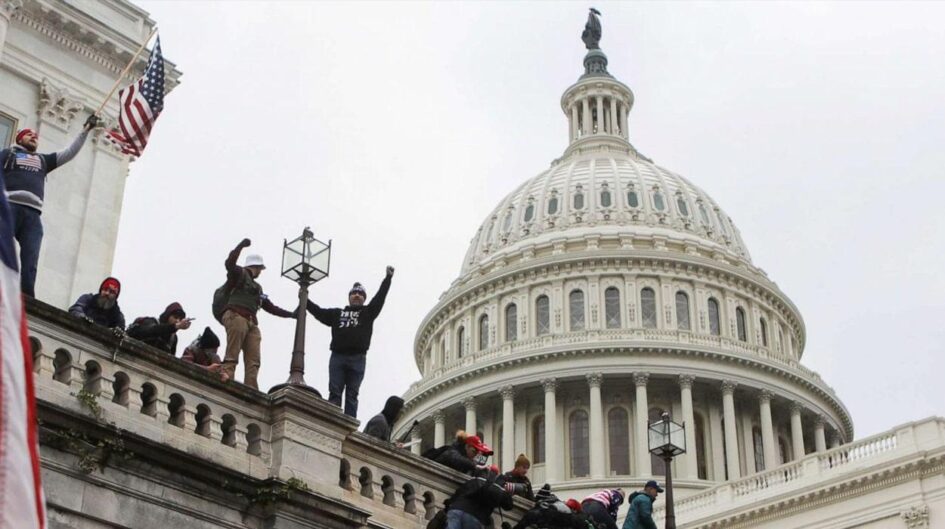 As we all somehow managed to make it past one of the most bizarre years of our lives, we all looked forward to 2021, hoping to abandon all things dreadful. Ironically enough, six days into the new year, what we can address as a major historic event, something to be remembered and not in a way we’d like, a riot at the Capitol and a violent attack against the United States Congress went down on 6th January 2021. The reason being, Donald Trump refusing to accept his defeat. Since the time of the election in 2020, Trump had made several claims stating that the whole election itself was an infringement and demanded a further review of unproven allegations of voter fraud.

In his words, “I have to start by saying the whole world is watching, and nobody can believe what they’re seeing. And you have leaders of countries that call me, say, that’s the most messed-up election we have ever seen. You start with these machines that have been suspected, not allowed to be used in Texas, the Dominion machines, where tremendous reports have been put out.” He also tweeted, “Our 2020 Election, from poorly rated Dominion to a Country FLOODED with unaccounted for Mail-In ballots, was probably our least secure EVER!”. With Covid around, we are redefining life every day, so the mail-in ballots being placed all over the country was one of the smartest ways an election could have been held, with no breaching detected.

Since Trump reprimanded his defeat, “Operation Occupy the Capitol” was made an online agenda, many online threats were made regarding the attack dating back to December. One day before the attack, 8kun, a far-right website, was one of the platforms used to regulate the fatal violence at the US Capitol. “You can go to Washington on Jan 6 and help storm the Capital,” said one 8kun user a day before the onslaught. “As many Patriots as can be. We will storm the government buildings, kill cops, kill security guards, kill federal employees and agents, and demand a recount.” What we fail to understand is how security forces in the nation’s capital were ambushed and left completely bewildered by rioters who stated their plans so openly on a range of social media platforms.

It began when an armed and angry mob of Trump’s supporters stormed the Capitol and collided with the police just as Congress assembled to certify Biden’s presidential win. These rioters, waving ‘Trump 2020’ flags and wearing accessories with the President’s slogan ‘Keep America Great’, entered the second-floor lobby of the building right outside the Senate chamber, the doors of which were being safeguarded by law enforcement officials.

The mob managed to get past the guards and enter the Senate chamber, where moments earlier the election results were being certified. The rioters wreaked havoc, with no integrity, breached all the barricades and marched into the Capitol building, smashed windows and statues, shattered glass, and brawled with the police officers. A flag engraved with the word “TREASON” was spotted on the floor. A Gadsden flag was hung between two windows, which is associated with a rattlesnake with the phrase “Don’t Tread On Me”. It has been used as a symbol by gun rights activists and in recent years, far-right groups.

Another Trump supporter who was spotted wearing a MAGA hat and clutching an American flag broke into House Speaker Nancy Pelosi’s office. As they searched for her specifically, she and her staff had to hide under any desk they could find, out of fear of being harmed or worse. Pelosi and Senate Majority Leader Chuck Schumer, from their undisclosed hiding spot, urged Trump to make his followers leave. Then, Vice President Mike Pence and his family were taken to a safe place. Rioters left a message on Pelosi’s desk that reads, “WE WILL NOT BACK DOWN”. Five people, including Capitol Police officer Brian Sicknick, died, while dozens more were injured. A lot has been damaged, some repairable, others, irreplaceable. 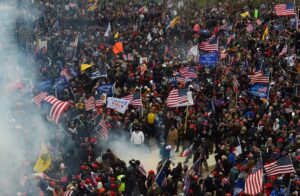 Donald Trump’s racist rhetoric has paved a way to encourage violence in America. When we compare the two protests that went down in America in recent times, one being the attack on Capitol and the other, the black lives matter movement, there is a clear difference in the manner the police handled both situations. The police response was extreme with the BLM movement, whereas rioters at the Capitol were reported to be escorted into the building by some officers. “No one can tell me that if it had been a group of Black Lives Matter protestors yesterday that they wouldn’t have been treated very differently than the mob that stormed the Capitol. We all know that’s true — and it’s unacceptable.” tweeted Joe Biden. Just when we think we are moving forward, racism and oppression bring us back to reality. White supremacy cannot be described clearer than this.

After this entire derangement, Joe Biden condemned Trump’s denial to graciously accept defeat and suggested that he was to blame for the violence. Trump stated, “Even though I disagree with the outcome of the election, and the facts bear me out, nevertheless, there will be an orderly transition on January 20th”. “I have always said we would continue our fight to ensure that only legal votes were counted. While this represents the end of the greatest first term in presidential history, it’s only the beginning of our fight to Make America Great Again,” he added. Trump’s comments came moments after Biden’s victory was finally certified by a joint session of Congress presided over by the then Vice President Pence. Congress confirmed President-elect Joseph R. Biden Jr.’s victory early Thursday morning i.e; the 7th of January, 2021.

In this modern-day, witnessing the rivalry among two leaders-one, for namesake and one, for the country, really makes us reflect on the world we live in, considering the close margin the two had. All the people that came to protest explicate the capability of how a democratic country entitles people to have diverse political opinions and enables them to put their thoughts to action. As America and the world witnessed solidarity that day, let’s not forget the suffering that was caused. A lesson learned indeed-world peace is worsening by the minute. Hopefully, moving on, we all can learn something from these series of events, a peaceful protest would set everything right. Well, I guess that is too much to ask for nowadays.

Ayrton Senna. A man whose legacy lives on to this day. Most modern-day drivers look up to him. He has won 41 Grand Prix in 162 races, has been on the podium 80 times, and has won the world drivers championship... END_OF_DOCUMENT_TOKEN_TO_BE_REPLACED

Two things have always fascinated me as a child- words and crosswords. Which word should I say? How do I say it? Can it, in its barely ten letters, hardly three syllables, carry the whole meaning of what I want... END_OF_DOCUMENT_TOKEN_TO_BE_REPLACED

It feels like just a week ago when the internet was bombarded with memes of Will Smith slapping Chris Rock at the 2022 Oscars. Ah, what a moment. The Cannes Film Festival too ended just recently, leaving us waiting for... END_OF_DOCUMENT_TOKEN_TO_BE_REPLACED

As the night grew darker, enveloping an empty street with mystery and fear, it embraced two college students, Matteo and Ace. Drunk and floundering into the dark alley, they hadn't realised how far they had wandered until they came across... END_OF_DOCUMENT_TOKEN_TO_BE_REPLACED