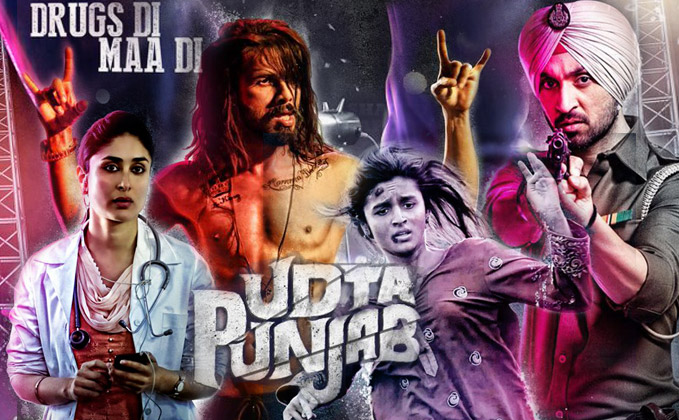 The much awaited Udta Punjab hit screens finally after a lot of controversy.

The story revolves around lives of four people : a rock star, a migrant labourer, a doctor and a cop who have only one thing in common, “Punjab”.

The movie kicks off on a scene where a man throws a drug packet across the border in the dark hours. Shahid Kapoor makes a striking appearance as Tommy ‘Gabru’ Singh in his rock star avatar which is followed by a look into his junkie lifestyle. On the other hand, the drug packet lands in the lap of Mary Jane (Alia Bhatt), a Bihari immigrant who dreams of becoming a national hockey player but ends up working in the fields of Punjab following her father’s death. While trying to sell off the packet in a jiffy and earn profits, her life takes an unexpected turn and becomes tormented for her. In the third place, Sartaj Singh (Diljit Dosanjh)  a cop in Punjab Police Force, works under a corrupt senior who is his mentor. He doesn’t really care about the drug mafia in his town until he finds out that his younger brother Balli is a druggie. Balli gets hospitalized due to drug overdose and is treated by Dr. Preet Sahani(Kareena Kapoor Khan). Sartaj decides to take action and works alongside Preet in an attempt to end the drug menace and expose the guilty. Even after finding out that there’s political power behind this, they strive ahead. He gives a strong message in the climax saying, “Baat meri ya aapki nahi hai, baat Punjab ki hai”, which depicts his determination towards making Punjab free from drug abuse.

In the end, Tommy Singh and Mary Jane, both victims of drug abuse fight their fears and emerge out as winners.

The dialogues of this movie are mainly in Punjabi. The strong characters and decent music are the USP of this movie. On the whole, the movie is a serious one unlike other Bollywood entertainers and is a must-watch. 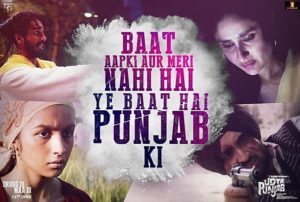 From a very young age, we are socialized to behave according to our sex. Boys are taught to be “masculine” and girls are taught to be “feminine”. But are there any biological differences between a man and a woman which... END_OF_DOCUMENT_TOKEN_TO_BE_REPLACED

“How long are you planning to cry and sleep in here?” I asked her, as I raised the blinds in her dark bedroom. Seeing the chocolate wrappers and empty Ramen cups spread across the room, I couldn't help but sigh.... END_OF_DOCUMENT_TOKEN_TO_BE_REPLACED

The human touch. Such a simple thing, yet one that holds immense power. Almost like a miracle. Wonder why? Read on.  We've been gifted with the five senses, namely: vision, speech, smell, hearing, and the most beautiful of all, touch.... END_OF_DOCUMENT_TOKEN_TO_BE_REPLACED

[Trigger Warning] The following reading contains potentially distressing information about self-harm. The reader is advised to use their discretion to continue reading.   Darkness cocooned her room, her heart twisted, churned, her fingers closed around her throat, nails digging into... END_OF_DOCUMENT_TOKEN_TO_BE_REPLACED

The corporate industry is notoriously famous for having the highest pay grade difference for employees working in the same company at different levels doing the same or similar jobs. This difference attracts several young engineers and management graduates into this... END_OF_DOCUMENT_TOKEN_TO_BE_REPLACED