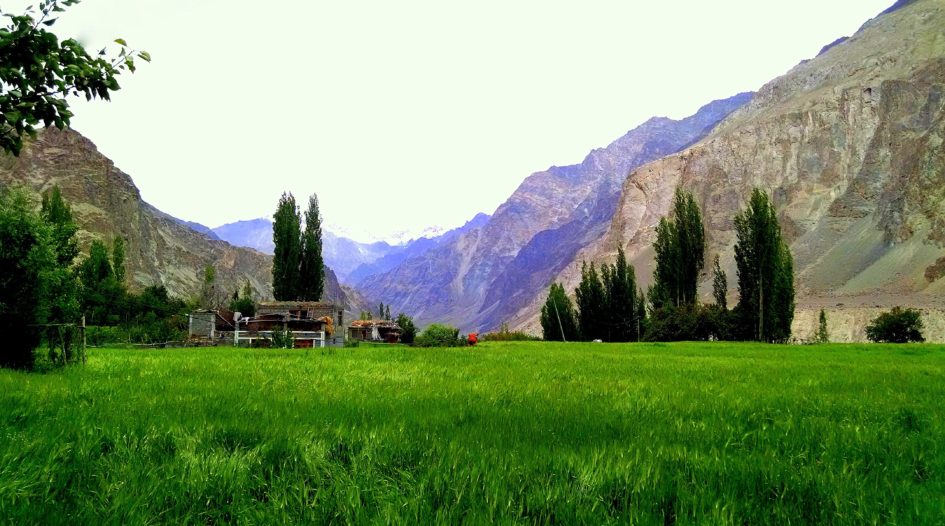 “Travelling. It leaves you speechless, then turns you into a Storyteller.” – Ibn Battuta

Turtuk is physically the closest one can get to Pakistan while in India. It is the northern-most and the “Last village” and is located right at the tippy-top of the Indian map. Frankly, the name of this village has a nice ring to it. This quaint town on the edge of India’s border is exotic, breathtaking -almost perfect.Once part of the present Pakistan, it is home to one of the most ethnic Muslim communities in our country. Although mostly Indian, the architecture in this town  has an Iranian influence on it.

We set off to Turtuk on a surprisingly sunny morning from Hunder, Nubra valley. We drove past the exquisite sand dunes of Hunder and along the banks of the Shyok river (Its name literally translates to death) on the only road there was. The road was straight, the makers have not veered right or left. The land around is grey and barren without a single patch of green anywhere in sight. The only moving things on that static landscape are our car and the fluttering Buddhist flags. The Sun here is different from what we see in our cities. It is warm and very bright. It took us a good three hours to reach the village.

Once we entered the village, local faces and beautiful eyes peered from everywhere to see us. The people of Turtuk are every bit as beautiful as the region. Although classified as Ladakhi’s they are Balti in every sense, the ‘tribe’ that typifies this alluring region where the world’s 2nd highest mountain is literally a stones throw away. Their high cheekbones ,hollowed out eyes and well-built frames sets them a world away from the Ladakhis. 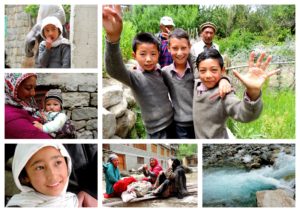 The town is divided into two parts: Youl and Pharol, separated by a pretty bridge hanging over a water-body. This village is home to beautiful, yet shy locals. There was no one to guide us. We made our way through a myriad of cobbled walkways to the museum. We were honored to meet the Yagbo Modh Khan, the direct descendant from King of Western Turkistan that ruled over this area (called Baltistan Chorbat) for over 1000 years (800 AD – 1800 BC). Turtuk was a central village and place for the king, today Modh Khan lives in the remnants of his home and has his own private museum of family artifacts over the ages.

Then, we set off to explore the rest of the village. It was quiet, but we could see kids and women hiding in their homes and peeping through  windows. The kids were eager to get their photos taken. Although, in return I had to pay them a pen per picture. I took hundreds of pictures of the locals and they didn’t mind posing. Although, few women objected and covered their faces with their dupattas.

As with other Ladakhi/Balti villages glacial melt water is channeled through the village in an elaborate series of channels. Therefore, you can find tiny to large rivulets of water flowing in and out of houses. Don’t confuse these with sewage lines! these waters are absolutely fresh. There are numerous wheat fields right beside the houses and from there one can see Pakistan ,which is just a hill away.

Turtuk is famous throughout India for its amazing apricots. No less than seven varieties and the sweetest in the country. I have to confess that these are the best apricots I have ever tasted! Turtuk also boasts its own apricot juice factory, slightly horrified at the thought of a factory in this idyllic setting, I was relieved to encounter the factory: ‘a one man-machine show’, that pitted, pressed and packed apricots into the most delicious juice. Available throughout Ladakh, not bad for local exports!

After having  stomach-fulls of apricot juice for lunch, we left Turtuk as storm clouds were approaching. We were welcomed by a sand storm once we reached Hunder and then we called it a day. Apricot trees and blue skies, what a privilege to have visited Turtuk.

“How long are you planning to cry and sleep in here?” I asked her, as I raised the blinds in her dark bedroom. Seeing the chocolate wrappers and empty Ramen cups spread across the room, I couldn't help but sigh.... END_OF_DOCUMENT_TOKEN_TO_BE_REPLACED

[Trigger Warning] The following reading contains events of death. **This is entirely a work of fiction and no distress was intended for any family/person affected by a natural disaster. “Please Ma!” Arya pleaded. “I made it to my final semester.... END_OF_DOCUMENT_TOKEN_TO_BE_REPLACED

Growing up watching Sci-fi movies, I always imagined myself living in a fully automated world with all these cool tech devices- flying sneakers, teleportation units, and whatnot. Something as dreamy as the “first cognitive city” proposed to be built in... END_OF_DOCUMENT_TOKEN_TO_BE_REPLACED

The human touch. Such a simple thing, yet one that holds immense power. Almost like a miracle. Wonder why? Read on.  We've been gifted with the five senses, namely: vision, speech, smell, hearing, and the most beautiful of all, touch.... END_OF_DOCUMENT_TOKEN_TO_BE_REPLACED

[Trigger Warning] The following article contains acts of cruelty and violence. Reader discretion is advised. I opened my laptop, exhausted from all the classes at college, (not) ready to log in to another class when I stumbled upon “Monster: The... END_OF_DOCUMENT_TOKEN_TO_BE_REPLACED