“If Tomorrow Comes” is a nerve-wracking piece of fiction which simply does not let you put down your novel. The author Sidney Sheldon builds has written the book in such way that every page is thrilling. Every incident leaves you in amazement and disbelief. The protagonist, Tracy Whitney, as the author describes is a gorgeous woman with an absolute genius mind. The story in the beginning is set in Philadelphia and New Orleans and the goes on to London, Paris and Madrid.

Tracy Whitney is a spectacular looking woman in her mid-twenties with a lively intelligent face, sparkling eyes and a spot on athletic figure. Tracy works for a bank in Philadelphia and does her job with utmost perfection. Tracy was carrying a baby with her boyfriend, Charles. Charles was a man with a classy background and belonged to one of the richest, best known families in Philadelphia.

The story begins as Tracy’s mother, Doris Whitney, phone calls her daughter as she wishes to hear her voice one last time as Doris goes on to kill herself. The reason for Doris Whitney’s suicide was a mystery to everyone. However, further on in the story, Tracy discovers it.  Doris had been duped by a man named Joe Romano. Joe Romano was the most powerful man in New Orleans. He along with another man named Orsatti ran the place on their fingertips. They held all the authority in New Orleans. Irrespective of whether they were doing things right or wrong, the law was forever in their favor. Now, Tracy wasn’t aware of their power. She filed a case against Joe and as everybody expected, landed herself in prison.

Life in prison was dreadful. Inhumane labor, assaults and misbehavior were the worst of all. Tracy never belonged there. She had made many plans to escape,however, before she execute even one of them, she finds her way out of it. Tracy’s good will and selflessness somehow got her out of there. She had been there for something Romano wrongly accused her and was tricked into the game by her lawyer, Fornati. Charles, her boyfriend whom she absolutely adored had abandoned her. Now, through her time in prison, Tracy was filled with hate. Hate for Romano. Hate for Orsatti. Hate for Fornati. Hate for Charles. One fine day, the hatred had disappeared. It had taken a new form. Revenge. 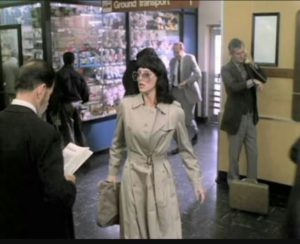 Tracy’s urge to seek revenge is what sets up the story. The entire story is about how Tracy finds her way through the worst of situations. Her status as a prisoner wouldn’t leave her. The most admirable thing about Tracy was that, she never gave up. Never lost hope. Her greatest power which never left her side was her ability to think. She invested a whole lot of thought and came  up with the most brilliant of plans. One by one, she defeated all of them who duped her. Defeated them to such an extent, that they never rose back. Now, Tracy had to earn a living. The way she did that wasn’t morally right or legal. However, she was a master at it. She would steal the most valuable and famous articles, and never left a trace.

Tracy had lost faith in the whole idea of having a man to live her life with. It is indeed commendable to see how she cracked the most difficult of job without the slightest assistance. However, she further on deals with two men. Jeff Stevens, similar to Tracy in profession, and Daniel Cooper, the sharpest of detectives. Nobody but Jeff dared challenge Tracy. He was handsome, passionate and equally excellent in business. They blew each other’s minds with every plan. Tracy left no stone unturned when she tried to defeat him in every chance she got. They were both aware of how they were physically attracted to each other but con artists as they were, hadn’t been foolish enough to let that come their way. Tracy never gave way for a man to win her over. After Charles, she was done by the whole idea of it.

Daniel Cooper was said to be the best detective. He predicted things even before they happened and was never wrong. Tracy was his most challenging target. He had had papers and photographs of her piled up in his files. He couldn’t take how the woman left no clues behind. Gradually, with a series of incidents, as Jeff and Tracy got closer and were into each other, everything felt right for either of them. They matched in standards of intelligence, looks and everything else. They decide to get married and before that, would quit being con artist forever. Cooper had been defeated. The ending is remarkable. It’s something nobody would expect

The story has a wonderful series of twists and turns which keep the book alive at every stage. Though written in the ’80s, it’s a book way ahead of its time. Every incident which I have stated is a consequence of a million unexpected events. Sheldon connects the ending of the book to such a former part of it that it would leave you awestruck. The book is a masterpiece and is a must read if you want to take your mind through a terrific journey.

Faith has always been considered as one of the most inherently pure and pious things, across any and every religion and every school of a belief system based on the concept of God. That is probably because every single one... END_OF_DOCUMENT_TOKEN_TO_BE_REPLACED

The lockdown, for most of you, was the most boring time of my life. Six months of staying at home didn't do me any good apart from the fact that it brought me and my dad closer by giving us... END_OF_DOCUMENT_TOKEN_TO_BE_REPLACED

Ayrton Senna. A man whose legacy lives on to this day. Most modern-day drivers look up to him. He has won 41 Grand Prix in 162 races, has been on the podium 80 times, and has won the world drivers championship... END_OF_DOCUMENT_TOKEN_TO_BE_REPLACED

The scene opens in a jury room, where a decision is to be taken on the death sentence of a man accused of murder. After voting, each juror explains why they feel the accused is guilty or not guilty. One... END_OF_DOCUMENT_TOKEN_TO_BE_REPLACED

Many of us might look back at the time we spent in school with nostalgia and fond memories. But most will also agree that it wasn't the happiest of places with long and monitored study hours, heavy bags full of... END_OF_DOCUMENT_TOKEN_TO_BE_REPLACED