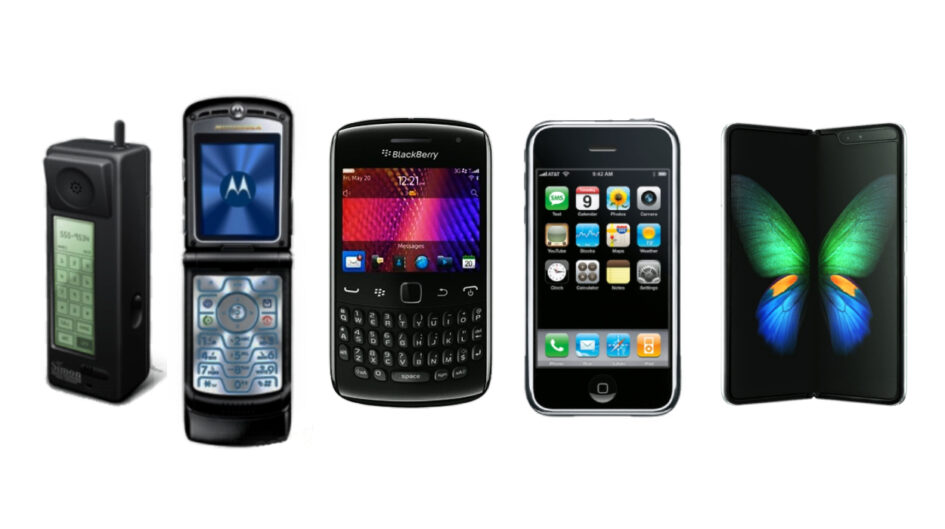 What makes a modern smartphone smart is its ability to connect to the internet and its functions like video playback, music, cameras, and gaming. The Candybar touchscreen form factor of smartphones has been in existence since 2006 or so, the smartphones we have today are vastly different from the early ones. In only a few decades, smartphones have become something only professionals with specific needs used to something essential for almost everyone.

The first smartphone was the IBM Simon, it could do emails, faxes and also could display news, stocks, and maps. But its popularity tanked due to its poor battery life and sheer bulk.

The first smartphones with the ability to connect to the internet appeared in the 2000s. They usually had different form factors like a T9 keypad either in a flip or non-flip form, QWERTY keypad, a resistive touchscreen, even slide-out form factors. All these were mixed and matched to get devices that tried to catch people’s attention. Unfortunately, some favoured form over function and hence there was a lack of uniformity in design.

The modern smartphone form as we know it today was introduced by the LG Prada in December 2006. Though the iPhone (2007) popularized the smartphone, like most things Apple does for better or worse. It contained a capacitive touchscreen with a multi-touch function and still looks somewhat similar to the smartphones we use today.

My first experience with a smartphone was with the Nokia N70 in 2007. My father got it after his first phone became outdated (the legendary Nokia 3310). It had a colour screen and could connect to the internet. Even getting a chance to look at it was a treat for the five-year-old me. And now I use a run-of-the-mill “budget” smartphone which gives me the most value for money. I honestly keep forgetting how good smartphones have gotten over the past few years and just take it for granted, when in fact someone from just 10 years ago would be amazed at what I can do with this seemingly insignificant piece of tech in my palm.

In the early era of modern smartphones, there were quite a few operating systems, such as iOS, Android, Symbian, BlackBerry OS, Palm OS,  Tizen, Windows Mobile, and many others. But today, mobile operating systems have been reduced to mainly two, Android and iOS. iOS can only be used on Apple’s iPhones, whereas nearly every other company uses Android.

In general, the learning curve for any interface, be it iOS or on Android is not very steep. All of them are designed to be user-friendly and can be learned in a short matter of time.

One can carelessly click a few pictures now and not worry about them being too bad. This is how far we’ve come from dedicated handheld digicams and camcorders which were a must at every event. Now, a smartphone suffices for most of our photography needs.

The displays on smartphones have gone from tiny to massive. The changing aspect ratios of screens have helped in this regard. Display sizes are measured in diagonal length. With larger displays, higher resolutions, and high refresh rate screens, today’s smartphones are excellent multimedia devices. The ports on a smartphone are USB, for charging and data transfer (either USB-C, MicroUSB, or Apple’s proprietary Lightning connector) and the audio jack.

New foldable form factors have brought back the flip phones too. They incorporate flexible displays and are breaking norms by bringing in fresh designs and immense possibilities. Foldables may even change how we use our smartphones.

The reason why smartphones in the early 2000s were not very popular was, cellular data was very expensive and slow. Also, most internet used was wired and at home or workplaces.

The rollout of the 3G network, which was the first viable network to provide internet on the go, stabilized in most parts of the world around early 2008. This coincided with the launch of 3G smartphones that enabled a lot of the things we do on our smartphones today.

From batteries that lasted only an hour to smartphones with all-day battery life, from the bulky designs that would require a bag to carry to the ones we easily fit in our pockets, smartphones have come a long way in thirty years. These devices which we wield in our hands are thousands of times more powerful than the computers used to send man to the moon. Using this tool, we have the world at our fingertips. Though we use them for what we believe are trivial tasks. At the end of the day, we can observe how smartphones have evolved and how far we’ve come in what seems like the blink of an eye. Imagine what kind of a device you will be holding in your hands in the next couple of decades.

“Hand me the gun and don’t move a muscle”, an injured Shankar Narayan whispers to his son, while they take cover under an old Contessa. The little boy does exactly as his father says, his hands trembling, desperately trying to... END_OF_DOCUMENT_TOKEN_TO_BE_REPLACED

Faith has always been considered as one of the most inherently pure and pious things, across any and every religion and every school of a belief system based on the concept of God. That is probably because every single one... END_OF_DOCUMENT_TOKEN_TO_BE_REPLACED

Two things have always fascinated me as a child- words and crosswords. Which word should I say? How do I say it? Can it, in its barely ten letters, hardly three syllables, carry the whole meaning of what I want... END_OF_DOCUMENT_TOKEN_TO_BE_REPLACED

The scene opens in a jury room, where a decision is to be taken on the death sentence of a man accused of murder. After voting, each juror explains why they feel the accused is guilty or not guilty. One... END_OF_DOCUMENT_TOKEN_TO_BE_REPLACED