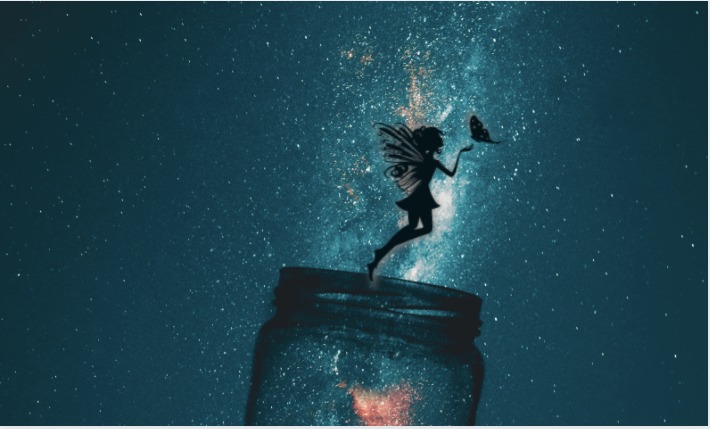 There she stands, by the shore, as the ocean gently kisses her feet. The waves trickle past her toes and go back smiling as she gives them life with every stroke of her brush. The sky never realised how beautiful it was until it saw itself in her eyes. She leaves the sky overwhelmed as all the metaphors that her eyes hold portray its beauty in so many different ways and colours.

The footprints she leaves on the sand are too precious to be erased, for the fate of the evolution of humanity lies balanced on her heels.  When she dances, she breathes life into the world. Each of her steps showing the way, a direction for people to walk towards. When she spins, it brings the revolving planet to a standstill.

When she writes, she can set the paper on a wildfire with her sentences, or help a storm find its calm. Her words have the power to topple kingdoms and build great nations. The ink from her pen can draw a stream of blood in war, or create a river of peace in which anyone would willingly drown. The beads of alphabets she adorns pages with can cage the simplest of entities while setting the most complex ones free. Love being one.

When she sings, her voice reaches far and wide. It knows neither borders nor boundaries of any kind. Her songs about the moon make the sky blush pink, while the former arrives on the stage lit by the stars of the night sky. I wonder if the moon slowly reveals its face from crescent to full only to listen to the verses sung by her, in complete awe. Every musical note is an ode to herself.

She plays with numbers and equations with child-like curiosity and enthusiasm. With every game that she plays with them, she unravels a new secret of the universe. She carefully puts pieces together to understand the puzzle of the world better. She is the reason why we find ourselves at corners of lanes leading to great discoveries. Sometimes she loses her way but finds it back with a new invention.

She is the eyes of every painting and the footprints left by every dance step. She is the beautiful touch of ink on paper and the same voice of emotion in every song. She is a magician that makes the largest of numbers fall into place to understand the smallest parts of the universe.

She holds art in one hand and science in the other to write the story of the world with them.

She is her own muse. She is Creativity.

“The heart and soul of a company is creativity and innovation” – Robert Iger, CEO of The Walt Disney Company from 2005-2020. The man who spearheaded Disney’s acquisitions of Marvel, Pixar and Lucasfilms. This article is inspired by his memoir “The Ride of a Lifetime: Lessons Learned from 15 Years as CEO of the Walt Disney Company”.

Police sirens, an opened door, a step out of the flat that had been an abode and a prison for 6-years-9 months-23 days—freedom at last?   Julian Assange was under no such false impression as the British police dragged him... END_OF_DOCUMENT_TOKEN_TO_BE_REPLACED

For the fourth time this week, I woke up at my desk. It wasn’t very comfortable: most of the space was taken up by an assortment of empty Red Bull cans and coffee cups. Clutter never bothered me though, it’s... END_OF_DOCUMENT_TOKEN_TO_BE_REPLACED

[Trigger Warning] The following article contains acts of cruelty and violence. Reader discretion is advised. I opened my laptop, exhausted from all the classes at college, (not) ready to log in to another class when I stumbled upon “Monster: The... END_OF_DOCUMENT_TOKEN_TO_BE_REPLACED

[Trigger Warning] The following reading contains potentially distressing information about violence, brutality and sadistic practices. The reader is advised to use their discretion to continue reading. “For the last time, you don’t have to do this. They will finish the... END_OF_DOCUMENT_TOKEN_TO_BE_REPLACED

Well, well, well. Something interesting has finally caught your attention in this painfully boring and monotonous life. You dash to the most convenient online marketplace to find the materialistic item that fuels your dopamine rush. These platforms help connect buyers... END_OF_DOCUMENT_TOKEN_TO_BE_REPLACED