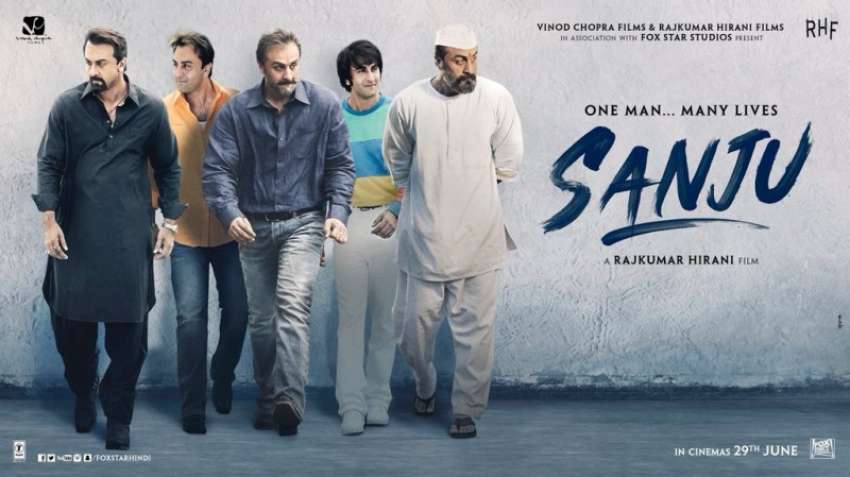 Sanjay Dutt (Ranbir Kapoor), decides to confront all the raw deals and intends to scrap the Terrorist word joined with his name. He reaches out to a London based biographer, Vinnie (Anushka Sharma), who at first refuses to write about him owing to all his atrocities, negativity and terrorist activities. However, her prejudice toward him changes when he narrates the story of his life to her. This is how the film sets out.

Drugs, alcohol and Mr.Dutt’s addiction to it, this is what occupies almost the entire first half of the movie. The way Dutt gets exposed to drugs and alcohol and the harsh consequences he faces due to it is what that is picturized in the first half. Surprisingly, I was bored and could not bound up with the movie very well which was not the case in other Hirani films. By this, I don’t mean that the film is drab and doesn’t entertain. It surely does and keeps you engaged all through.

There are three influential characters in the film. Sanju’s friend(Jim Sarbh), makes him a drug addict with the cruel intention of earning money and becomes a biggie leaving Sanju in serious distress and addiction. Jim Sarbh has once again done a spectacular job. But the limelight is however stolen by Vicky Kaushal(played Kamlesh), whom Sanju meets in the U.S and they go on to become best buddies. He helps Sanju overcome his addiction and tries to make him a better person. Their friendship is something to look up to in the film. Kamlesh’s character adds a little humour and cheers to Sanju’s life and to the film. But the most influential and powerful character who moulds Sanju’s life is Sanju’s father, Sunil Dutt(Paresh Rawal). He plays a doting father, and experiences some real humiliation and struggles all the way through to make his son free from all the charges against him.

The second half is all about his conviction for possessing illegal arms and about his links with the underworld gangsters, owing to which he gets tagged as a ‘terrorist’. In the end, the audience is well convinced that Sanju was not guilty and deserves a stand.

The direction of this movie could have been better. Unlike other Hirani films, this film has barely something to remain with the audience. It has a good content, but it misses Raj Kumar Hirani’s touch. Many aspects of Sanjay Dutt’s life are left untouched in the film. The whole running time of the film is used up to prove that Sanju is not a terrorist. The movie title- ‘I am Sanju and I am not a terrorist’ could have justified the movie better than ‘Sanju’. Nevertheless, it is still watchable, thanks to Ranbir Kapoor, who plays the title role in the film. Words cannot describe how fantastic his performance was. He is that talent which saves the movie from being below average. He is no less than a method actor and was totally into his character. His body language, dialogue delivery was exactly like Sanjay Dutt. There were few scenes which kept me wondering if it were Sanjay Dutt himself acting on the screen. He deserves an honour for this and will definitely achieve one.

The final bottom line is, go for it if you are a Ranbir Kapoor fan. Even if you are not, you will surely become one towards the end. Do not walk in with lot many expectations from the film. But if you do not watch it, you will not regret your decision.

The corporate industry is notoriously famous for having the highest pay grade difference for employees working in the same company at different levels doing the same or similar jobs. This difference attracts several young engineers and management graduates into this... END_OF_DOCUMENT_TOKEN_TO_BE_REPLACED

Aren't all of us artists trying to express ourselves in this world? In my opinion, art is a form of expressing an emotion. Learning how to express our subconscious emotions and communicate with them will take time but what is... END_OF_DOCUMENT_TOKEN_TO_BE_REPLACED

Growing up watching Sci-fi movies, I always imagined myself living in a fully automated world with all these cool tech devices- flying sneakers, teleportation units, and whatnot. Something as dreamy as the “first cognitive city” proposed to be built in... END_OF_DOCUMENT_TOKEN_TO_BE_REPLACED

[Trigger Warning] The following reading contains potentially distressing information about violence, brutality and sadistic practices. The reader is advised to use their discretion to continue reading. “For the last time, you don’t have to do this. They will finish the... END_OF_DOCUMENT_TOKEN_TO_BE_REPLACED

From a very young age, we are socialized to behave according to our sex. Boys are taught to be “masculine” and girls are taught to be “feminine”. But are there any biological differences between a man and a woman which... END_OF_DOCUMENT_TOKEN_TO_BE_REPLACED