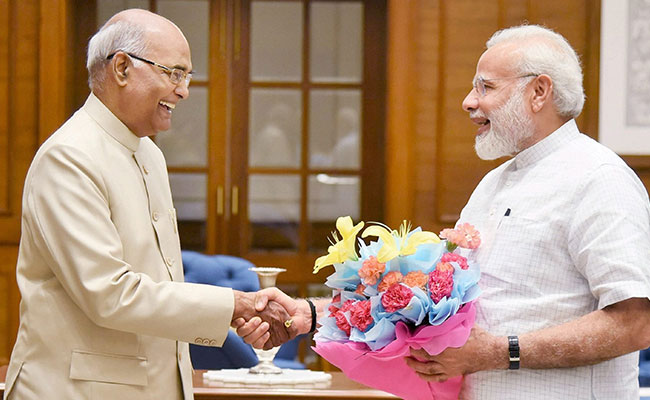 We all know that Hon’ble Ram Nath Kovind became the 14th President of The Republic of India on 25th July, 2017. He was the NDA’s choice as presidential candidate and won with over 7 lakh votes against opposition candidate, Meira Kumar, former Loksabha speaker. But, because of his humble nature and low profile politics we don’t know much about him as a person. 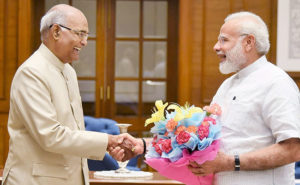 So, let’s dig deeper into his past. Born on October 1st 1945, in a village in rural Kanpur, Ram Nath Kovind, the son of a farmer, who subsequently sold off a piece of land to fund his education in Kanpur, where he enrolled for a law degree and prepared for the civil services examination, picking up scholarships along the way. He cleared the exam in his third attempt but refused to join the service that was not of his choice. He chose, instead, to practice as a Lawyer,  first at the Delhi high court and later as standing counsel at the supreme court between 1980 and 2003. He joined BJP in 1991 and contested in two assembly polls in UP, both of which he lost. He served two terms at the Rajyasabha between 1994 and 2002 and served as the president of the SC wing between 1998 and 2002. Coming to his personal life, he is married to Savita Kovind and has a son and a daughter. 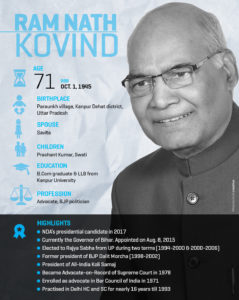 He was appointed the governor of Bihar in 2015 and managed to strike good working relationship with chief minister, Nitish kumar , who reciprocated it by supporting him in the presidential polls despite calls for opposition’s unity. He served as a member of a lot of committees which includes the parliamentary committee  for SC/ST welfare, Home ministry, petroleum and natural gas ministry , social justice and rights ministry law and justice ministry. He was also the chairman of the Rajyasabha housing committee. He belongs to the RSS and served as a personal secretary to the then PM Morarji Desai, and also was a close ally of the former Prime Minister Atal Bihari Vajpayee. He also represented India at United Nations, New York and addressed the UN general assembly in October 2002.

And finally he became the first person in BJP to make it to the Rashtrapathi Bhavan. From his humble origins to his quite journey to the higher ranks of the party and finally the president of the world’s largest democracy, he has been known to maintain the social harmony within the larger framework of the hindu society. On the day he was elected President he recollected how he and his siblings would stick to the corners of their hut as the roof could not stop the rain from pouring into their home.

Although the media portrayed the contention between Ram Nath Kovind and Meira Kumar as Dalit Vs. Dalit, it is obvious that this decision of choosing him as the presidential candidate is highly political. Considering the fact that the role of a President in the Indian politics has always been largely ceremonial, there is only one purpose the BJP would want this nomination to serve: bagging the 200 million Dalit votes in 2019 general elections. Most parties have refrained from opposing the BJP’s pick considering his clean image. He is the second Dalit president of India, after K. R. Narayanan and one may not underestimate the important symbolism the Dalit president may have for this community.

Hope was an absurd emotion.   It was a chilly midnight when it happened for the first time. Monique was a light sleeper. After all, it didn’t take much more than a dull, heavy thud for him to jolt awake... END_OF_DOCUMENT_TOKEN_TO_BE_REPLACED

[Trigger Warning] The following reading contains potentially distressing information about self-harm. The reader is advised to use their discretion to continue reading.   Darkness cocooned her room, her heart twisted, churned, her fingers closed around her throat, nails digging into... END_OF_DOCUMENT_TOKEN_TO_BE_REPLACED

Flash, Flash, Flash. Various screens show the face of the actor. A woman crying in the corner while another loves the visual of her crying. The editor looks at all of these different shots and lets out a satisfied... END_OF_DOCUMENT_TOKEN_TO_BE_REPLACED

The corporate industry is notoriously famous for having the highest pay grade difference for employees working in the same company at different levels doing the same or similar jobs. This difference attracts several young engineers and management graduates into this... END_OF_DOCUMENT_TOKEN_TO_BE_REPLACED

[Trigger Warning] The following reading contains potentially distressing information about violence, brutality and sadistic practices. The reader is advised to use their discretion to continue reading. “For the last time, you don’t have to do this. They will finish the... END_OF_DOCUMENT_TOKEN_TO_BE_REPLACED