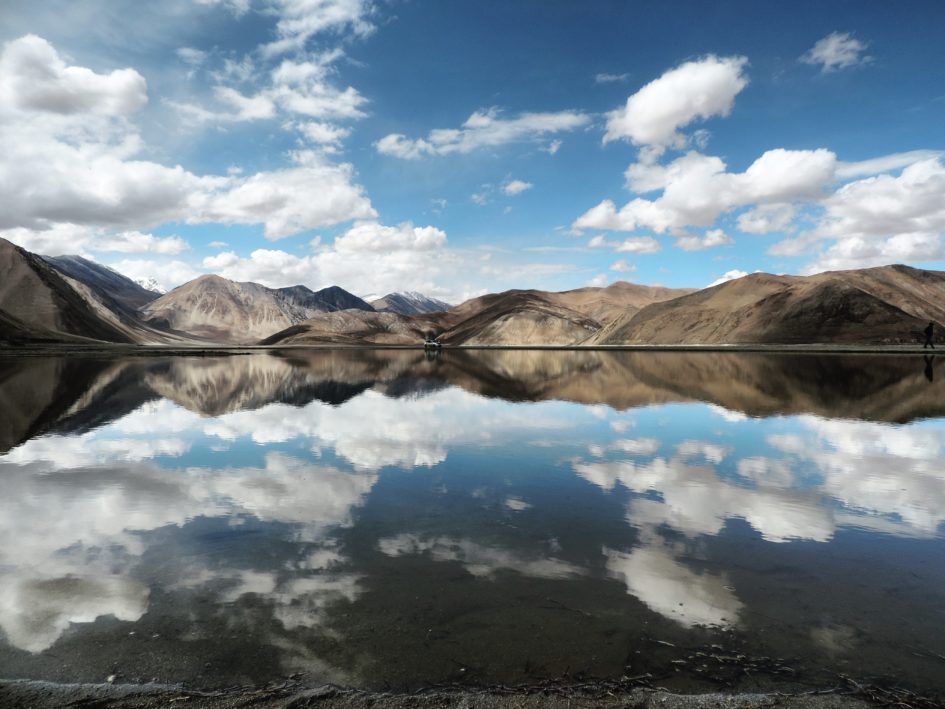 “The world is full of wonderful things you haven’t seen yet.

Don’t give up on the chance of seeing them.”

If you go to Leh and don’t visit the mesmerizing Pangong  tso, you’d be doing the road trip wrong. Pangong  tso(Pangong in tibetan means high grasslands and Tso means lake) is a spotless, pristine blue paradise. You certainly have seen pictures of this lake on the internet. It became famous after the climax scene of 3 idiots was shot here. It is an endorheic  lake which means that it retains water and allows no outflow to other bodies of water. It is situated at a height of about 4,250 m and is 134 km long and extends from India to China. 60% of the lake lies in China. 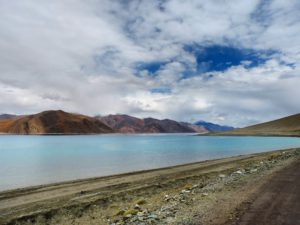 The entire lake lies on a salt bed and hence the water is saline due to which the lake is pretty lifeless. But, you will find a whole lot of birds doing their carefully choreographed dance in the sky in hopes of finding prey(They love crackjack biscuits, by the way). During winter, the lake freezes completely, despite being saline water. An  Inner Line Permit is required to visit the lake as it lies on the Sino-Indian Line of actual control. While Indian nationals can obtain individual permits, others must have group permits (with a minimum of three persons) accompanied by an accredited guide. 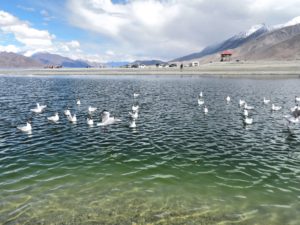 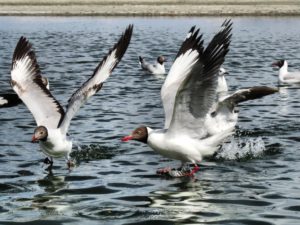 After a tiring journey to Turtuk and back to Nubra we slept like babies and couldn’t wake up before eight that morning. We set off to Pangong  at around 9 with the sun blazing down on us. Along the shyok river, on one of the many lonely roads, we waved goodbye to the flawless sand dunes of Nubra and headed towards Spangmik village(the lake is in this village). The road looked like a black velvet ribbon draped carelessly over the hills disappearing into the horizon. It  took us a whopping  7 hours to get to the lake and all of us were pretty AMS(Acute Mountain Sickness) hit by then. 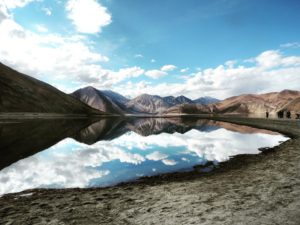 On that sultry day in mid-June, the lake was as flat as any mirror. It laid without a ripple in the silver-blue water as if time itself had been frozen. From the tall pines around the edge came not a sound, no movement of branches, not a person. There was absolutely nobody when we got there. Barefoot is the only way folks travel around here, the only shoes being worn by the horses. So, we decided to keep up with the trend and walk along the lake. We met some big rodents called marmots, which are essentially Ground squirrels and are just as shy as everything else in Ladakh. It was a lazy afternoon and we sat by the water and started throwing stones into the lake which skipped several times (my personal highest was 11 skips) across the still water and drowned. Then once again the lake looked like glass. 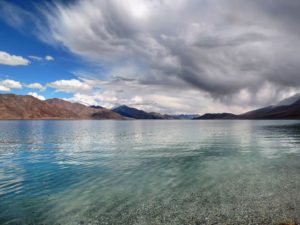 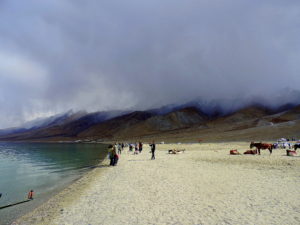 In an hour or so, came bands of travellers in their fancy white Innovas and with them came the storm. It rolled in from over the mountains and turned the lake into a sea, sending  fierce waves in all directions. The air grew heavy and the humidity pressed down. Everybody ran for shelter from the gushing wind and we did too. And then, all of a sudden, the wind held its breath and the downpour began. So, we decided to call it a day and went back to our camp which is essentially two tents with a view and a bathroom. We stayed indoors for the rest of the evening because the wind grew chilly and the lake is now a sea. 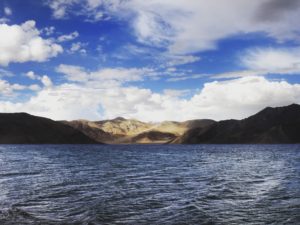 We had our dinner in a small restaurant in Spangmik. I indulged myself in a steaming hot bowl of Thukpa(noodles in soup) and waited for the rain to stop. It didn’t. The temperature dropped to 10 degrees.  we ran to our camp only to feel our hands freeze from the chilly air. I tossed and turned that night to get some sleep. But then something caught my attention, the calm after the storm. Rain stopped and the sky is clear. In twilight the lake glistened mirroring the moon and the stars. The faint wind brushed against the water , and the ripples caught the moonlight . 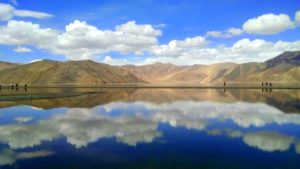 When the sun rose the next morning, the lake sent rays of colors from every end of the spectrum running in all directions and left a mark on everything around it; the tents, the hills, the people and every living soul in its vicinity. Oh what a privilege to have visited Pangong. 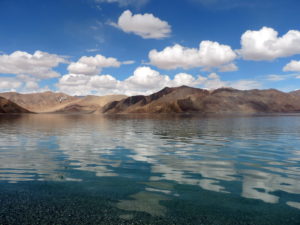 It feels like just a week ago when the internet was bombarded with memes of Will Smith slapping Chris Rock at the 2022 Oscars. Ah, what a moment. The Cannes Film Festival too ended just recently, leaving us waiting for... END_OF_DOCUMENT_TOKEN_TO_BE_REPLACED

Faith has always been considered as one of the most inherently pure and pious things, across any and every religion and every school of a belief system based on the concept of God. That is probably because every single one... END_OF_DOCUMENT_TOKEN_TO_BE_REPLACED

Ayrton Senna. A man whose legacy lives on to this day. Most modern-day drivers look up to him. He has won 41 Grand Prix in 162 races, has been on the podium 80 times, and has won the world drivers championship... END_OF_DOCUMENT_TOKEN_TO_BE_REPLACED

Did your 8-year-old self ever wish for that awesome Pixar movie that you watched, and you watched, then you watched again, to be real? Because I did!  I had a dream. I wished I was a car so that I... END_OF_DOCUMENT_TOKEN_TO_BE_REPLACED

The scene opens in a jury room, where a decision is to be taken on the death sentence of a man accused of murder. After voting, each juror explains why they feel the accused is guilty or not guilty. One... END_OF_DOCUMENT_TOKEN_TO_BE_REPLACED