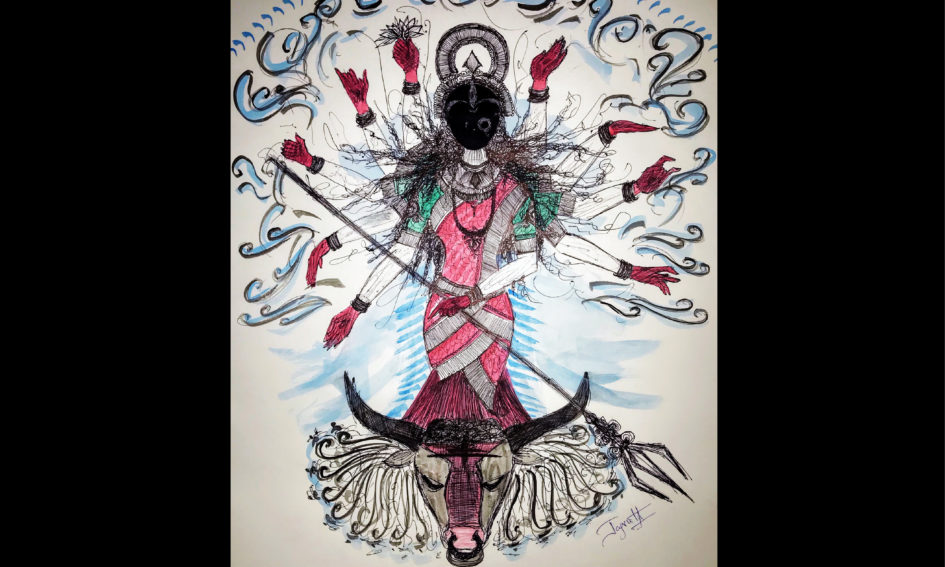 Navratri, are the most auspicious nights celebrated during the first nine days of ‘Aasveeyuja/Aashwin‘ month of Hindu calendar. These days are considered to be very sacred and beloved to Adishakti, the original creator, observer, and destroyer of the universe, according to Shakta belief. Worshipping her is not an easy task. She is a strict mother, but her grace is gigantic. All she knows is to love her children. Let her test you a little, and then, I am sure she will forgive all your sins and fill your life with tons of happiness, health and wealth. The celebration of Navratri varies from Aryan to Dravidian culture. The Aryans worship goddess Durga, a supreme incarnation of Adishakti in her nine forms, the Navdurgas (Shailaputri, Brahmacharini, Chandraghanta, Kushmanda, Skandamata, Katyayini, Kaalratri, Mahagauri and Siddhidhatri). While in the Dravidian culture Durga is seen in nine distinct alankaras. Each alankara depicts a different goddess with a sole motherliness.

Day 1 Bala Tripura Sundari Devi: She is also called Shodashi which means a sixteen-year-old girl, and is deemed to be the daughter of Lord Shiva and Parvathi. Goddess Parvathi felt extremely lonely and unhappy when both her sons Lord Ganesh and Karthikeya grew up and were occupied with their responsibilities. She sought a wish from Kalpavriksha (a divine tree that fulfils one’s wishes) for a daughter. She was hence blessed with a beautiful daughter, Ashoksundari (Ashok = one who drives away grief). Her existence is mentioned in the 26th chapter of Lalitha Mahatmya, in Brahmandapurana (one among the eighteen Puranas). She sits on a white lotus which signifies her innocence and a pure heart. Being playful, getting new experiences and charming others are the key characters of Bala Tripura Sundari Devi. She charms every human with her beauty (Tripurasundari, beautiful damsel in the three worlds- Heaven, Earth, Hell) and guides young aspirants in the right path.

Day 2 Gayatri Devi: Often called Vedamata which means mother of the Vedas. This form of Shakti is seen resting on a lotus and appears with five heads and ten hands holding various weapons. The five heads signify the four Vedas and the almighty. People pray her by reciting the twenty-four syllabic Gayatri Mantra.

Day 3 Annapurna Devi: In India food is treated equivalent to god. She is the goddess of food and nourishment in Hinduism. She is seen seated on a throne, serving food to Lord Shiva standing at her doorstep in the holy city, Kashi. It is evident from various tales that there exists no state of hunger in families that worship goddess Annapurna with a pure heart. Her motherhood has no limits when her children starve. It is said that Lord Shiva himself went in her quest to scrounge food.

Day 4 Mahalakshmi: The consort of Lord Vishnu and the goddess of wealth. She resides in lotus, in- the forehead of an elephant, back of a cow, in wealth and also in all tidy places. She is always seen with a pleasant face. Adi Shankara, an Indian philosopher, composed a twenty-one verse hymn Kanakadhara Stotram in praise of goddess Lakshmi, as he was driven by an old lady’s gesture towards him when he went to her doorstep seeking alms. Goddess Lakshmi was so pleased that she showered the lady’s hut with gold berries.

Day 5 Lalitha Tripura Sundari: She is the most powerful form of Adiparashakti. She resides in a place called Manidweepam in the garden of Kadamba trees. She is shown sitting ON Lord Shiva who seems to be in a sleeping posture on a divan, served by goddesses Lakshmi and Saraswati on either side. Goddess Parvathi took this form to kill a demon called Bhandasura. This incarnation signifies how a mother takes several forms to protect her children from evil.

Day 6 Maha Saraswati: She is the goddess of wisdom, knowledge, and music. She is adorned with white saree and is seated on a swan which signifies peace. In India, children are sent to school only after seeking her blessings. Just the way a mother takes care of her child’s education, goddess Vani makes sure all her devotees reach majestic heights in life.

Day 7 Durga: Durga means the invincible one. She is illustrated with eight hands holding eight weapons, riding a tiger. Goddess Durga gives her devotees strength and confidence to battle the toughest times in their lives. She fills in positivity in her devotees just the way our mothers try hard to keep our spirits high even in failure.

Day 9 Sri Rajarajeshwari Devi: She is the presiding deity of Sri Chakra. Sri Chakra is a mystical diagram (Yantra) used for invoking Adishakti. She is seated on a golden throne holding sugarcane in her right hand. She is the most pleasant form of Parvathi who rules over the senses of humans and helps them to understand the split between good and evil.

Though Adishakti appears in numerous forms to bless her devotees, her ultimate aim is to help the indigent and take care of them like a mother. While Shakti is the universal mother, Shiva is the universal father figure. That’s the reason they are called ‘Adidampathulu’, which means the first couple. The grace of the divine mother is never partial, everyone is equal in her eyes. Offer anything to her with love, she’ll accept it and never let you turn back empty-handed.

From a very young age, we are socialized to behave according to our sex. Boys are taught to be “masculine” and girls are taught to be “feminine”. But are there any biological differences between a man and a woman which... END_OF_DOCUMENT_TOKEN_TO_BE_REPLACED

“THE SWAT TEAM BURST IN. THERE WAS CURTIS GREEN COVERED IN COCAINE AND FLANKED BY TWO CHIHUAHUAS” ~The Untold Story of Silk Road by WIRED In early 2011, law enforcement agencies were caught with their pants down when drugs began... END_OF_DOCUMENT_TOKEN_TO_BE_REPLACED

The human touch. Such a simple thing, yet one that holds immense power. Almost like a miracle. Wonder why? Read on.  We've been gifted with the five senses, namely: vision, speech, smell, hearing, and the most beautiful of all, touch.... END_OF_DOCUMENT_TOKEN_TO_BE_REPLACED

Well, well, well. Something interesting has finally caught your attention in this painfully boring and monotonous life. You dash to the most convenient online marketplace to find the materialistic item that fuels your dopamine rush. These platforms help connect buyers... END_OF_DOCUMENT_TOKEN_TO_BE_REPLACED

Growing up watching Sci-fi movies, I always imagined myself living in a fully automated world with all these cool tech devices- flying sneakers, teleportation units, and whatnot. Something as dreamy as the “first cognitive city” proposed to be built in... END_OF_DOCUMENT_TOKEN_TO_BE_REPLACED