Gunshots for Education or Tantrums over Misery? 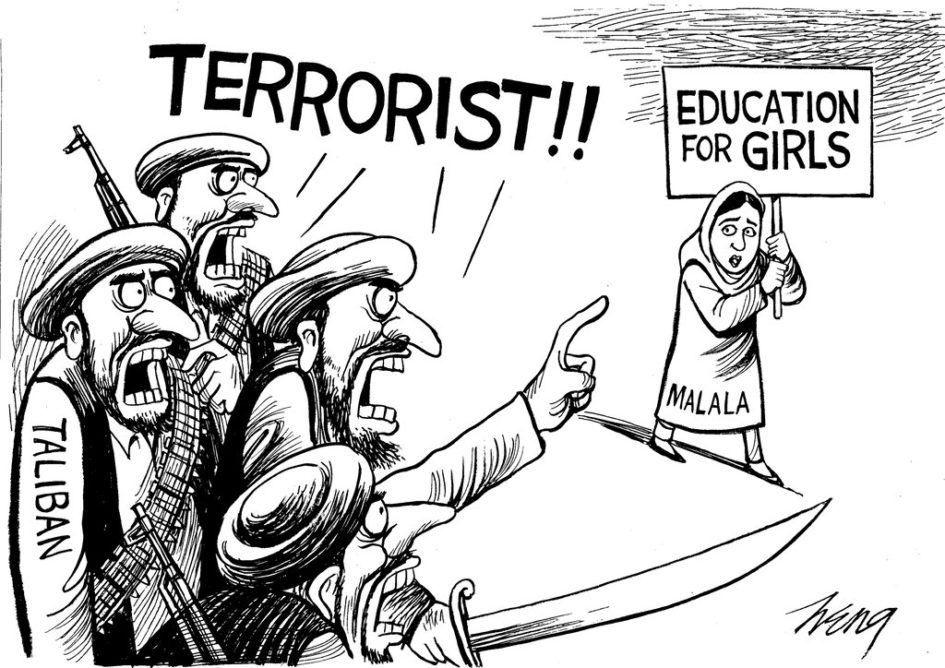 It’s that time of the year when the bright days of summer begin to wind down which take an unfortunate toll on the younger generations as most of us struggle to go back to our respective educational institutions. As times change, we are no longer content with just basic needs and want to experience a luxurious life. Social media, for example, is seen as an incredible platform for opportunities and progress in many fields. However, it has also proven to be quite dangerous if misused.

The younger generation or ‘The Millennials’ are under its influence a lot more when compared to the rest. Sadly enough, most of us live in a world where the number of likes on an Instagram picture is valued more than the number of straight A’s on a report card. These days, teens are often found complaining about life being hard while acting moody or cranky at the idea of education and schooling. We do not realize how privileged or spoiled we actually are and end up being inconsiderate towards the underprivileged and their hardships. The value of basic education can only be understood if it’s looked at from a whole new point of view.

Many of us might want to disagree on the fact that we’re privileged but chances are if you’re reading this, you’ve got good internet and a decent electronic device and most of all, you have the basic ability to read and hence are considered a literate. It may not seem like a huge revelation but while you’re here reading this there is about 14 per cent of the world’s adult population, that is, almost 750 million of them that cannot read or write, in which, young females account for about 67 per cent and approximately 115 million children who are illiterate. Yet again, these are just statistics(as mentioned by UNESCO) and rough numbers that no one would bother to remember.

So in order to get things into perspective, just picture watching a favourite movie or reading an amazing book that you’ve probably recommended to all the people you know. And now, picture those millions of children who would never get a chance to read that or any other book at all. It is extremely heartbreaking to imagine all the innocent faces in the world still waiting to hold a pen or read a book. Many of whom have also been silenced in one way or another. Despite all this, there are still a lot of them who’ve refused to back down and have decided to raise their voices against the forces.

Among these voices, there was a voice of a little Pakistani girl who was determined to keep up the fight and refused to give into any sort of fear or obstacles that came her way. Her name is Malala. Needless to say, the young education activist Malala Yousafzai is definitely the epitome of bravery and an inspiration to all of us. From a very young age, Malala had a keen interest in learning and valued the importance of education. After witnessing the uprising terror of the Taliban in her hometown, she decided to become an advocate for girl’s education at the age of 11.

While most of us at that age were receiving primary education and a secure childhood, she, however, was receiving rather disturbing and frightening death threats from the terrorists at just 12 years of age. On October 9, 2012, 15-year-old Malala was shot in the head by a gunman of Taliban while she was travelling home from school on a bus. He spotted her easily as she was not wearing a veil and shot bullets right through her head and neck as he wanted to “teach her a lesson”. She was then taken to the UK for advanced treatments as her condition was critical with a bullet possibly lodged close to her brain. She readily risked her life for girls to have the opportunity to study and have equal rights to education for everyone. As shocking as it may seem, the terrorists with the huge guns and fatal weapons had feared the idea of little girls going to school. She survived the gunshot and became a much more powerful voice who went on to fiercely continue her simple yet influential cause.

In 2013, she gave a speech at the United Nations about gender equality and fight against discrimination after which the Secretary-General Ban Ki-moon pronounced July 12th(Malala’s birthday) as ‘Malala Day’ in honour of her activism towards ensuring education for all children. In 2012, the Pakistani government awarded the first National Youth Peace Prize to her. In 2014, at the age of 17, she became the youngest recipient of the Nobel Peace Prize.

She is just one of the many inspirational women and men who’ve dedicated their lives to issues like these and has been working selflessly for the betterment of the people. So if they can do it, why can’t we? Are we all really that self-absorbed to neglect something as important as education? Nobody’s forcing us to feel guilty for our privilege because it’s as equally not our fault as it is theirs. But the least we could do is think about the unfortunate kids in Pakistan or Kenya or parts of India and be grateful for our privileges as the power of knowledge is the greatest power that one can obtain. What if Malala had given up because her life was too hard or that she was too scared?

Fear is only an illusion and a state of mind that can be triumphed over by courage and faith while ignorance is the fuel to fear. Great minds and noble souls often inspire people to gain the confidence and strength to look fear in the eye and conquer it. So this ‘Malala Day’ we can all start by realizing the vital role of education in our lives and begin to overcome our fears by taking one small step at a time because a brave soul once quoted:

“Let us remember: One book, one pen, one child, and one teacher can change the world.” -Malala Yousafzai.

Trigger Warning: The following article contains a portrayal of characters suffering from severe mental illness. Readers' discretion is advised.   Jane was driving her away from the glimmer of light towards the darkness, creeping deeper and deeper, until she was... END_OF_DOCUMENT_TOKEN_TO_BE_REPLACED

Everyone knows Sushant from his popular movie MS Dhoni- the Untold Story. After MS Dhoni, he was seen in the film Chhichhore, which gave a beautiful message "Suicide is not the solution". Many students found the movie relatable. After Chhichhore,... END_OF_DOCUMENT_TOKEN_TO_BE_REPLACED

Since the primitive days of human existence, we have come quite far as a civilization. While this advancement can be attributed to numerous factors, the ability to socialize takes the cake. This remarkable ability to express our feelings, work together,... END_OF_DOCUMENT_TOKEN_TO_BE_REPLACED

What’s wrong with the title? Has there been a mistake or has the writer gone crazy? Would you believe me if I tell you that nothing is wrong at all? Here’s the trick-Replace each letter of the title with its... END_OF_DOCUMENT_TOKEN_TO_BE_REPLACED

Disclaimer: The facts mentioned in this article may vary with the actual ones. "To conquer oneself is a greater victory than to conquer thousands in a battle." – Dalai Lama The second world war reached its final stage in 1945,... END_OF_DOCUMENT_TOKEN_TO_BE_REPLACED