Lost At Sea: The Man Who Vanished For 14 Months

In November 2012, Salvador Alvarenga went fishing off the coast of Mexico. Two days later, a storm hit and he made a desperate SOS. It was the last anyone heard from him – for 438 days. This is his story. 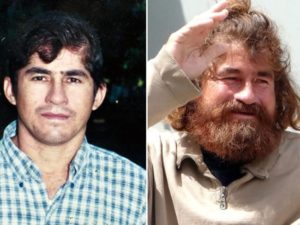 Salvador Alvarenga, a 36-year- old fisherman from El Salvador, had left the coast of Mexico in a small boat with a young 22 year crewmate.

Around 9am, Alvarenga spotted the rise of a mountain on the horizon. They were approximately two hours from land when the motor started coughing and spluttering. He pulled out his radio and called his boss.

“We have no GPS, it’s not functioning.”

“We have no anchor,” Alvarenga said. He had noticed it was missing before setting off, but didn’t think he needed it on a deep-sea mission.

At around 10am the radio died. It was before noon on day one of a storm that Alvarenga knew was likely to last five days. Losing the GPS had been an inconvenience. The failed motor was a disaster. Now, without radio contact, they were on their own.

Within days, Alvarenga began to drink his urine and encouraged Córdoba, his crewmate, to follow suit. It was salty but not revolting as he drank, urinated, drank again, peed again, in a cycle that felt as if it was providing at least minimal hydration; in fact, it was exacerbating their dehydration.

After two months at sea, Alvarenga had become accustomed to capturing and eating birds and turtles.

“I am tired, I want water,” Córdoba moaned. His breath was rough. Alvarenga retrieved the water bottle and put it to Córdoba’s mouth, but he did not swallow. Instead he stretched out. His body shook in short convulsions. He groaned and his body tensed up. Alvarenga suddenly panicked. He screamed into Córdoba’s face, “Don’t leave me alone! You have to fight for life! What am I going to do here alone?”

Six days after Córdoba’s death, Alvarenga sat with the corpse on a moonless night, in full conversation, when, as if waking from a dream, he was suddenly shocked to find he was conversing with the dead.

After drifting at sea for 14 months Alvarenga noticed a tiny island. He stared at the land as he tried to pick out details from the shore. It was a tiny island, no bigger than a football field, he calculated. It looked wild, without roads, cars or homes. Half dead, he shouted for help and he was taken to Ebon Atoll, the southernmost tip of the Marshall Islands, and the closest town to where he had washed ashore.

Hope was an absurd emotion.   It was a chilly midnight when it happened for the first time. Monique was a light sleeper. After all, it didn’t take much more than a dull, heavy thud for him to jolt awake... END_OF_DOCUMENT_TOKEN_TO_BE_REPLACED

Police sirens, an opened door, a step out of the flat that had been an abode and a prison for 6-years-9 months-23 days—freedom at last?   Julian Assange was under no such false impression as the British police dragged him... END_OF_DOCUMENT_TOKEN_TO_BE_REPLACED

Well, well, well. Something interesting has finally caught your attention in this painfully boring and monotonous life. You dash to the most convenient online marketplace to find the materialistic item that fuels your dopamine rush. These platforms help connect buyers... END_OF_DOCUMENT_TOKEN_TO_BE_REPLACED

[Trigger Warning] The following reading contains potentially distressing information about self-harm. The reader is advised to use their discretion to continue reading.   Darkness cocooned her room, her heart twisted, churned, her fingers closed around her throat, nails digging into... END_OF_DOCUMENT_TOKEN_TO_BE_REPLACED

“How long are you planning to cry and sleep in here?” I asked her, as I raised the blinds in her dark bedroom. Seeing the chocolate wrappers and empty Ramen cups spread across the room, I couldn't help but sigh.... END_OF_DOCUMENT_TOKEN_TO_BE_REPLACED