Leo and his Oscar! 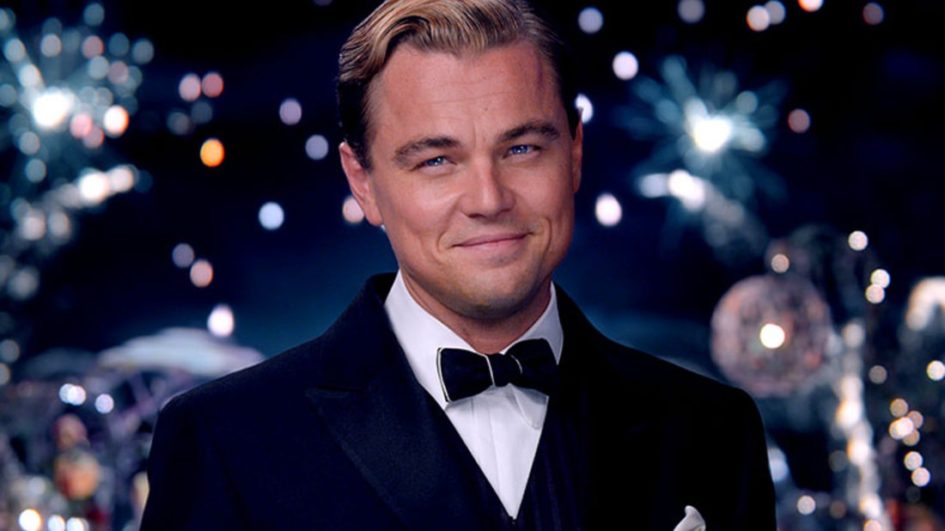 Leo and his Oscar!

Warning: The following article has been written by a hard core Leonardo DiCaprio fan, so moderate amount of fangirling ahead!

He is an impeccable actor and one of the most brilliant actors of this generation, and has finally won an Oscar. We are, of course, talking about Leonardo DiCaprio, the 41-year-old American star of films such as Titanic, The Wolf of the Wall Street, The Great Gatsby which saw him collaborate with long-time best friend Tobey Maguire, and Django Unchained.

Leo’s long Academy award career began in 1994 for his role as Arnie in the drama What’s eating Gilbert Grape where he played a mentally handicapped brother of Johnny Depp’s character. Leonardo brought out the intricacies in the character so vividly. That was an Oscar-winning performance but still the Academy Gods hadn’t smiled on the first-time nominee.

Eleven years later, in 2005, he was nominated for The Aviator for his portrayal of Howard Hughes, an aviation pioneer and a successful film producer who suffers from severe OCD. Leonardo, as always, delivered an immensely impressive performance. This time too he wasn’t honoured with the prestigious award. In 2007, the nomination was for Blood Diamond, an American-German political war thriller where he plays Danny Archer. His performance was lauded by critics and audience alike but he was pipped by Forest Whitaker for The Last King of Scotland.

And finally in 2014, Leonardo came close to Oscar glory when he was nominated twice for The Wolf of Wall Street, for Best Actor and Best Picture (Producer). This film is a biographical Black comedy that depicts the tale of Jordan Belfort, a crooked stockbroker in NYC. This movie saw the Powerhouse star at the very top of his game. It also marked his fifth collaboration with Academy Award winner Martin Scorsese. Such a stupendous performance too couldn’t fetch him an Oscar. 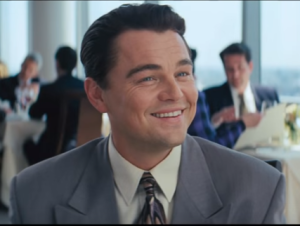 This time, DiCaprio was a hot favourite to pick up Best Actor for his performance in The Revenant. The Revenant was a seven-month shoot in sub-zero temperatures and lead the Oscars contenders with 12 nominations including best picture and best director. In The Revenant, he does most of his acting with his eyelids. It shows his 19 Century hunter character named Hugh Glass left for dead, watching his son murdered after being mauled by a bear, trekking through miles of icy mountains and kipping inside the disemboweled carcass of a horse. To read more about this movie, read Praharshita’s article here. He has already picked up almost every major award for his performance in this movie including the Golden Globe. This time around, he also had fellow Oscar nominee Eddie Redmayne’s support. He said, “I think it’s pretty much certainly Leo’s year, and so well deserved.”

His 20-year battle for an Oscar has also provoked memes and an 8-bit game called, “Leo’s Red Carpet Rampage.”

Here are a few handpicked ones: 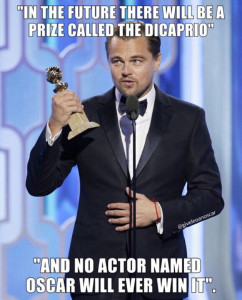 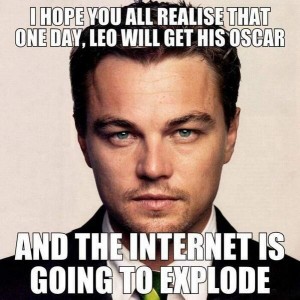 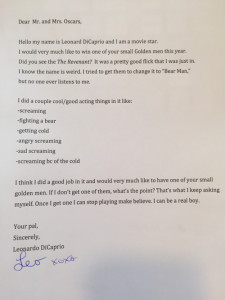 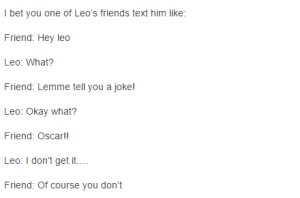 It mustn’t be surprising to hear that the following incredibly talented actors haven’t picked up the small gold man too, yet. The list includes, Harrison Ford (I know, Han Solo!), Tom Cruise, Brad Pitt, Johnny Depp, Keira Knightly, Jessica Chastain and Samuel L Jackson. Well, they are all in the “House of Unrecognized Talent”.

After walking away empty-handed five times,  Leonardo DiCaprio finally received his Oscar and the internet hasn’t exploded yet, as evident from the meme. It was a heartwarming moment seeing him on stage with the statuette in hand. Here’s his epic acceptance speech where he attempted to draw the lens of the world towards the cause he supports when the cameras stop rolling- Environmentalism and Climate Change.

Thank you all so very much. Thank you to the Academy, thank you to all of you in this room. I have to congratulate the other incredible nominees this year. ‘The Revenant’ was the product of the tireless efforts of an unbelievable cast and crew. First off, to my brother in this endeavor, Mr. Tom Hardy. Tom, your talent on screen can only be surpassed by your friendship off screen… thank you for creating a transcendent cinematic experience. Thank you to everybody at Fox and New Regency…my entire team. I have to thank everyone from the very onset of my career… To my parents, none of this would be possible without you. And to my friends, I love you dearly, you know who you are.

And lastly I just want to say this: Making ‘The Revenant’ was about man’s relationship to the natural world. A world that we collectively felt in 2015 as the hottest year in recorded history. Our production needed to move to the southern tip of this planet just to be able to find snow. Climate change is real, it is happening right now. It is the most urgent threat facing our entire species, and we need to work collectively together and stop procrastinating. We need to support leaders around the world who do not speak for the big polluters, but who speak for all of humanity, for the indigenous people of the world, for the billions and billions of underprivileged people out there who would be most affected by this. For our children’s children, and for those people out there whose voices have been drowned out by the politics of greed. I thank you all for this amazing award tonight. Let us not take this planet for granted. I do not take tonight for granted. Thank you so very much.

It didn’t even require Steve Harvey to host the Oscars for Leo got it anyway! ‘And the Oscar goes to… Leonardo DiCaprio!’ *jumps in joy*

From a very young age, we are socialized to behave according to our sex. Boys are taught to be “masculine” and girls are taught to be “feminine”. But are there any biological differences between a man and a woman which... END_OF_DOCUMENT_TOKEN_TO_BE_REPLACED

The human touch. Such a simple thing, yet one that holds immense power. Almost like a miracle. Wonder why? Read on.  We've been gifted with the five senses, namely: vision, speech, smell, hearing, and the most beautiful of all, touch.... END_OF_DOCUMENT_TOKEN_TO_BE_REPLACED

[Trigger Warning] The following article contains acts of cruelty and violence. Reader discretion is advised. I opened my laptop, exhausted from all the classes at college, (not) ready to log in to another class when I stumbled upon “Monster: The... END_OF_DOCUMENT_TOKEN_TO_BE_REPLACED

[Trigger Warning] The following reading contains potentially distressing information about self-harm. The reader is advised to use their discretion to continue reading.   Darkness cocooned her room, her heart twisted, churned, her fingers closed around her throat, nails digging into... END_OF_DOCUMENT_TOKEN_TO_BE_REPLACED

[Trigger Warning] The following reading contains events of death. **This is entirely a work of fiction and no distress was intended for any family/person affected by a natural disaster. “Please Ma!” Arya pleaded. “I made it to my final semester.... END_OF_DOCUMENT_TOKEN_TO_BE_REPLACED