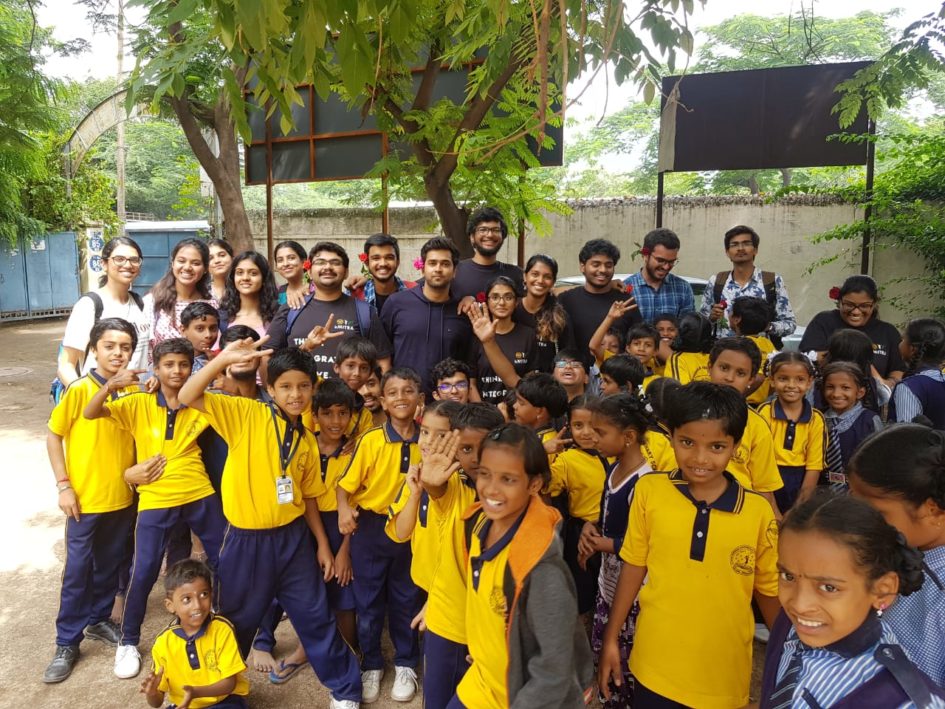 Voices echoed the grounds of Vivek Vardhini Kanyashala Girls High School, as the kMITRA team bid farewell to the many bubbles of joy.

In August, kMITRA, KMIT’s e-magazine had organized a fundraiser to build a better future for the students of Vivek Vardhini school by pledging to donate amenities including benches. The idea of the FR had spurned two months ago. And after many meetings, long WhatsApp discussions and rigorous efforts, the team successfully raised enough funds to aid the junior section of the school.

It had all started in June when the team sat together to plan the agenda for the academic year 2019-20. As we were pondering over the last few years of kMITRA, the 2017 FR flashed in front of our eyes. We decided that this year as well, the team will take another step to make the world a better place. The idea of conducting the FR was finalized and August was chosen as the commencement month.

With a ‘Book Themed Edition’ having been published in July, it then seemed right to build a library for a school. The team had a school named Vivek Vardhini’s contact and decided to call them to understand their needs and put forth their idea. Chairperson, Mrs. Kanchan Jatkar, was hence called. However, the library aside, the team was troubled to hear the problems which ma’am had conveyed.

Vivek Vardhini Kanyashala, Gowliguda, is co-ed from nursery to 5th and a girls’ school from 6th onwards to 10th, with a total of 400 students.

Despite being a school having a history of 103 years, with having created revolutions in improving the women’s education; with having set milestones for achievement and becoming the beacon of light in the forest of darkness, Vivek Vardhini was fighting the social injustice it was facing from many sides. The team had now decided that, by doing this fundraiser, they will become one of the support systems for this wonderful school.

The team in its next meeting planned a rough flow of events- to set up the stalls, collect the funds, visit the school, conduct a literary event for the kids and finally, donate the collections.

The next step was the on-ground survey. The team visited the school to assess its condition and plan the fundraiser. We then had a meeting with the headmaster and mistress, Mr. Ashok and Mrs. Vaishali along with the school’s faculty. The meeting concluded with the team explaining their idea and plan. 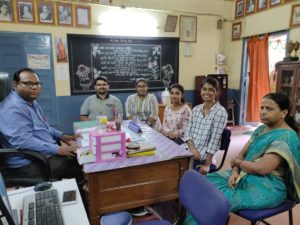 In the next Team meet, we finalized the number and location of stalls. We also finalized a day-wise schedule to decide who will be looking after which stall on which day. Along with this, point of contact for the banners, fundraiser box, collections, and refreshments for the event day was chosen.

The fundraiser commenced with two stalls along with two banners being placed in the college. Funds were also accepted via PayTM and GooglePay. Every day, two-to-three of the team members guarded each stall during breaks and after college. At the end of each day, the total funds collected were accounted for. 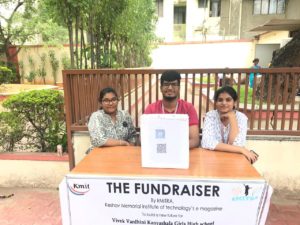 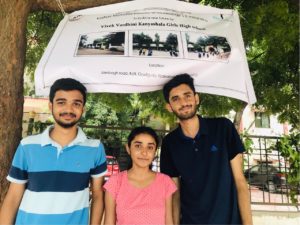 After a month of rigorous efforts, the next meeting was scheduled to plan the literary event for the school. The team ensured that the collected funds remained untouched and the costs of the literary event were from the Team’s side.

Then the most awaited day had come! We rendezvoused at 9:30 am at the Vivek Vardhini Kanyashala Girls High School. The team had planned games like Pictionary, fire in the mountain, spelling bees for the classes from Nursery to 5th, and activities and workshops like story writing, debate, extempore for the classes till grade 9th.

We were welcomed with shrills of human fluffs as one could call the Kindergarten toddlers. These tiny tots caught our eyes as they held each other’s shoulders forming a height wise human chain to enter the school ground. While five volunteers looked after them, the rest of the team marched towards their assigned classes. The energetic day had begun! 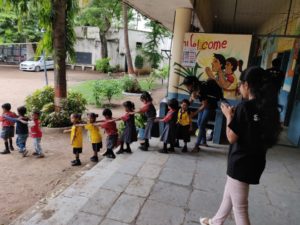 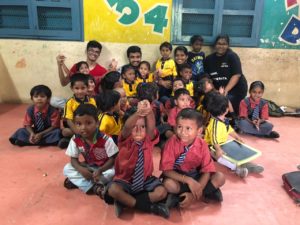 While a few classes roared with laughter as ‘Team A’ defeated ‘Team B’ in Pictionary, the grounds echoed with the games of kho-kho, kabaddi, throwball and catch. The energy, enthusiasm and vigour of the students had spell-bounded us, but what surprised the team more were their heroics. While handstands and cartwheels became a common sight, a grade two student effectively performed a 3×3 multiplication sum on the board. “I like Maths”, he had replied as our jaws were wide agape. 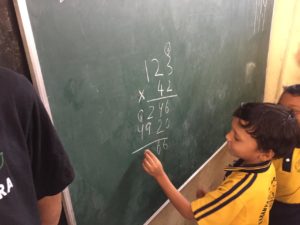 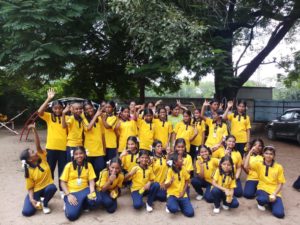 The meticulously planned schedule had designated time for outdoor and indoor activities for all classes. The event concluded with the distribution of soft-drink tetra packets to all the students.

The three hours spent over there had taught us more about the joy in life, than the knowledge we tried imparting to these students. Once respective class teachers had resumed their classes, the team was addressed by the school board. Along with cups of coffee, we were gifted with red roses, a symbol of regard and love, as Mr. Anil Rajeshwarkar (join secretary Vivek Vardhini Educational Society) and Mrs. Kanchan Jatkar addressed the kMITRA team. They praised the team for the efforts and we thanked them for the opportunity, patience and time they had given us. We were elated to have met the loving and dedicated faculty, hardworking staff and were equally privileged to have visited this school. 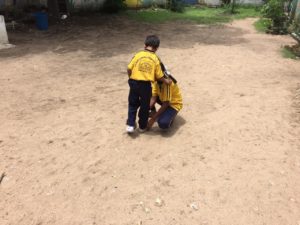 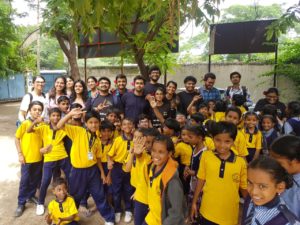 Our hearts refused to leave the place as numerous students waved us bye from corridors, grounds and classrooms. The surplus soft-drinks were later donated to SPURTI- Sneh Ghar, Residential Home for boys, Vidya Nagar. 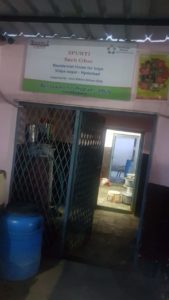 Incorporating its principles of think, integrate and evolve, kMITRA Team attempted to create a ripple in the vast ocean of development through their fundraiser. The event wouldn’t have been possible without the immense cooperation from Keshav Memorial Institute of Technology’s management, help from kMITRA’s alumni: Mohak Aurangabadkar, Anmol Jain, Akhil Anand Samudrala and Azam Ansari, co-volunteers: Yaganti Shreya, Sreevarsh Vasista and GVS Anvitha, and finally YOU, our very generous donor. Without YOUR love, care, support and zest for the underprivileged minds of the nation, we wouldn’t have been able to succeed.

The team is currently processing the total funds received, stay tuned for the update on the funds in our next edition! 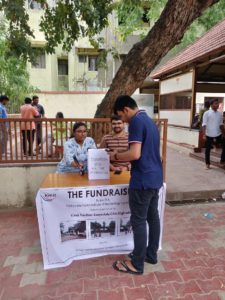 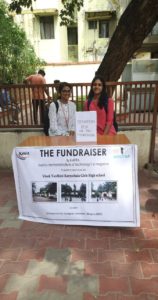 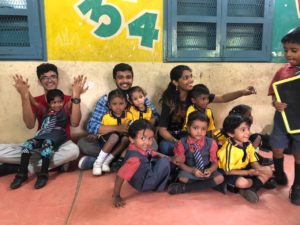 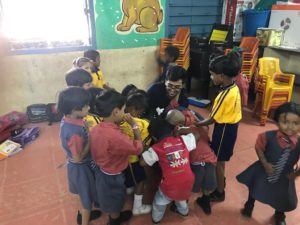 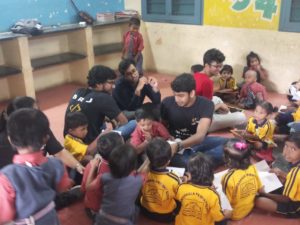 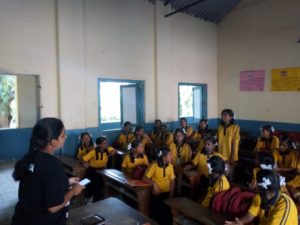 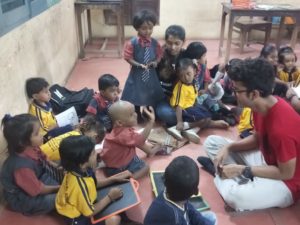 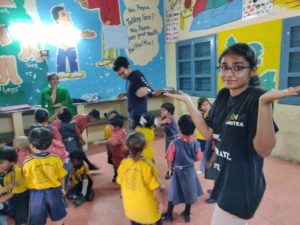 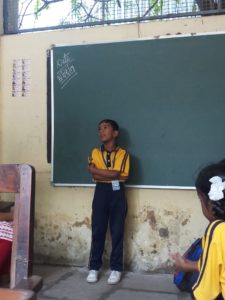 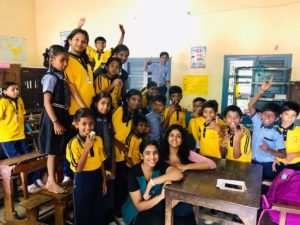 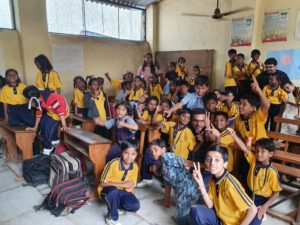 “Why do the Yankees always win? The other team can't stop looking at the pinstripes.” The famous quote by Frank William Abagnale Jr., one of the popular con-men specialized in impersonation and forgery, can definitely be taken as the basis... END_OF_DOCUMENT_TOKEN_TO_BE_REPLACED

When was the last time you noticed your dark circles and regretted staying up late watching a movie? We’d say never! Movies are an essential part of our life. They play a vital role in the advancement of our culture.... END_OF_DOCUMENT_TOKEN_TO_BE_REPLACED

"How do you feel about this achievement? Your book is now one of the fastest-selling books!" asked one of the reporters. "I'm happy for this book's success more than any of my other books. Because this book is not a... END_OF_DOCUMENT_TOKEN_TO_BE_REPLACED

What is common to a mullet-wielding, neon-donning 1980s American teenager and their Persian contemporary living in obscurity, confined in the clutches of Ayatollah Khomeini's reign? Hint: it starts with 'rock' and ends with 'music'. In 1979, at the heels of... END_OF_DOCUMENT_TOKEN_TO_BE_REPLACED

As I take a stroll in the graveyard observing my funeral, I find a few crying and the other meticulously bored by the doings. Yet it feels so light, death actually took away the pain of my congenital disease. But... END_OF_DOCUMENT_TOKEN_TO_BE_REPLACED