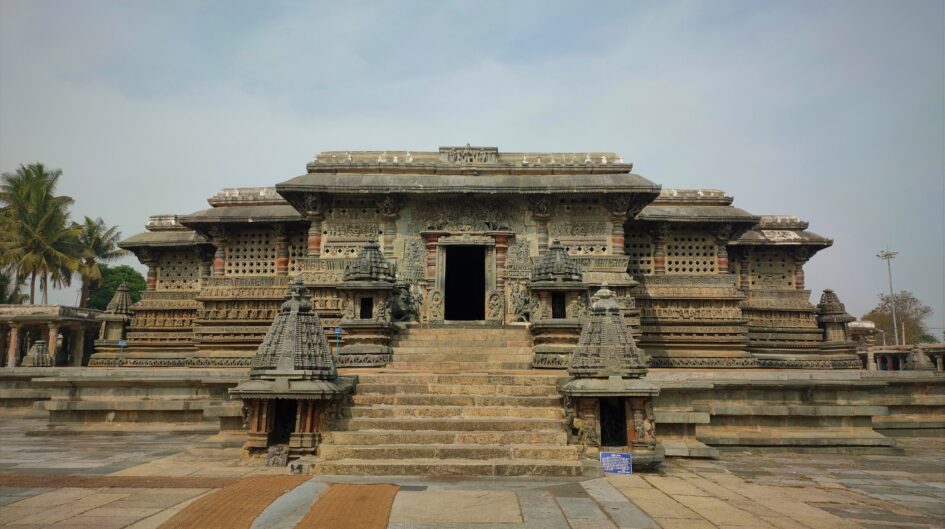 Zestful cross-rhythms of symphonious bells. Undamped reverberations of vedic hymns. Unmistakable aromas of holy incenses. Unfathomable chants of pious devotees. These are the first images that usually occupied my mind when I heard the word ‘temple’! I’m not much of a religious person, so you have better chances of finding me on Mars than in a temple. It was not until recently that I discovered a new dimension to what a temple could conceal. Something mundane yet unworldly.

God? Let’s try that after retirement. I was talking about sculptures.

Sculptures play a prominent role in religions where people worship idols. A temple may contain several sculptures. The deities worshipped in temples are mostly idols. In modern-day temples, most of the sculptures aren’t made of stone. They are castings made of gypsum plaster or similar materials. Stone carvings are seldom found but they exist too. They’re carved and polished smoothly using sophisticated tools and machines.

In the present world, we have access to advanced technologies, but what about nine centuries ago? All they had back then were chisels and hammers. What if I told you that the best sculptures I’ve ever seen were made not using today’s equipment but only using primitive tools?

A few months ago, I had the privilege to visit Chennakesava temple in Belur, Karnataka. At first, I was reluctant to go on a pilgrimage, but today this monument is on the list of best things I’ve seen with my eyes. ‘Chennakesava Temple’ was constructed during the 12th century. The tour guide was believable when he told me that it took over a century to build this temple. It was an enormous structure, and wherever I looked, all I could find was stone.

The outline of the main structure of the temple is a zillion-sided polygon with sharp vertices everywhere. The monument contains several horizontal layers of stones stacked upon each other. Each of these layers contains a continuous chain of small sculptures. These sculptures usually depict a scene from Hindu mythology or a series of events. Some layers even have mythical creatures and moral stories. The amount of detail shown in a sculpture hardly as large as my palm is incredible. Placed higher on the outer walls are some large sculptures. I didn’t find a particular pattern in the placement of these sculptures. They are of different sizes and depict a single deity or mythological figure.

The intricacies of these sculptures look too good to be true. How different hairstyles and ornaments are depicted is simply magnificent. The best feature of these sculptures is the three-dimensional depiction of various parts. Various parts are at different distances from the eye, and the outermost part is disconnected from the wall. They are connected only to the body of the deity. Remarkably, all these layers were carved from a single stone, and nowhere was any kind of mortar used in the temple.

The interior of the temple is as marvelous as the exterior. The outer sculptures seem to be a little damaged and worn out, but the inner ones are still lustrous. The more prominent structures inside the temple are the pillars. Each pillar is different from the others and has splendid designs.

The tour guides told me that three generations of sculptors were involved in building this temple. Bringing stones to life takes immeasurable patience and tenacity. These sculptors dedicated their entire lives to these temples and never ran out of determination. I’m pretty sure these sculptures will stand tall for several more years. Just a glance at one of these sculptures lightens my heart to a great extent. When I see heaven in these sculptures, I know for sure where the sculptors’ immortal souls rest!

The new normal was finally here and so was the necessity of having to sit in a room full of people, people you have to compete with just so you can make sense of life. I kept fidgeting with my... END_OF_DOCUMENT_TOKEN_TO_BE_REPLACED

[TRIGGER WARNING] The following article portrays drug usage, bombings and death which is potentially distressing. It’s been a year since I have seen a ray of sunlight. I sometimes forget if I finished my meals because of the drugs I... END_OF_DOCUMENT_TOKEN_TO_BE_REPLACED

“It’s your first global press conference! Are you sure you can manage it all alone?” Mr. Eoin asked out of concern to his niece, the CEO of Orion. “I’m confident Uncle Eoin. Like every time I’m sure I can handle... END_OF_DOCUMENT_TOKEN_TO_BE_REPLACED

Ping! Sound familiar?  That's the sound I woke up to every day, ever since I got my first mobile phone at thirteen. Of course, technology has come a long way. But at least I did not have to ask a... END_OF_DOCUMENT_TOKEN_TO_BE_REPLACED

Every time my dad and I go on a long drive, we always tend to have serious discussions that range from my career choices to a wrong selection in the Indian cricket team for an important match. On one particular... END_OF_DOCUMENT_TOKEN_TO_BE_REPLACED