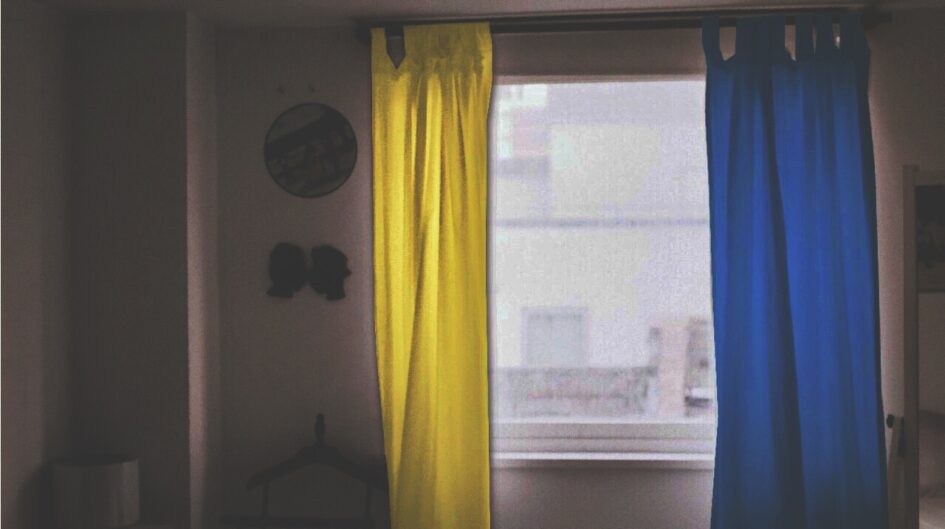 Many a summer, I’ve been here,

The heat of April, I’ve seen.

But this April was only fear.

The heat of a pandemic, unforeseen.

As blue as the summer skies.

But this one, terrifyingly it unfolded before my eyes.

The beloveds’ faces were little windows on screens,

While the neighbors’ windows were mostly shut.

I couldn’t comprehend much.

I heard no din of traffic,

Neither did dust from roads lay on me.

I could hear the whispers of little birds like magic,

To be honest I was quite relieved.

Soon, I heard gasps for breath.

The silence had overstayed its welcome,

To many, it brought a death knell.

And they began praying for better times to come.

The season of wind and rain.

Funny how time can be slow and yet it can fly.

I hope the skies open up and wash away all the pain.

I go to the laundry now and the shelf later.

Every July I wish to stick around,

To watch the raindrops splatter.

But after all that I’ve seen, my heart needs rest to come round.

A yellow curtain takes my place.

Its colour goes well with the grey sky, they say.

He’s got a smile on his face,

Loves watching the drops race across the window on a rainy day.

“There’s not much to smile about”,

I whispered to him while being taken off.

“The times have been hard. Yes.”

“But they’re better now and they will be”, he said.

“How’ve you got the strength to hope?”,

I asked in wonder.

And left me to ponder.

Beside the window of life.

The world has been torn apart,

But it has been built time and time again amidst terror and strife.

To hope is the one thing we can do,

For hope is the blessing we carry,

The spark that flickers in our hearts.

The one that has made us persist before,

The one that will now show light.

[Trigger Warning] The following reading contains potentially distressing information about self-harm. The reader is advised to use their discretion to continue reading.   Darkness cocooned her room, her heart twisted, churned, her fingers closed around her throat, nails digging into... END_OF_DOCUMENT_TOKEN_TO_BE_REPLACED

Well, well, well. Something interesting has finally caught your attention in this painfully boring and monotonous life. You dash to the most convenient online marketplace to find the materialistic item that fuels your dopamine rush. These platforms help connect buyers... END_OF_DOCUMENT_TOKEN_TO_BE_REPLACED

Each person does see the world in a different way. There is not a single, unifying, objective truth. We're all limited by our perspective. - Siri Hustvedt Perspective. It is a beautiful thing in a way that, all of us... END_OF_DOCUMENT_TOKEN_TO_BE_REPLACED

Hope was an absurd emotion.   It was a chilly midnight when it happened for the first time. Monique was a light sleeper. After all, it didn’t take much more than a dull, heavy thud for him to jolt awake... END_OF_DOCUMENT_TOKEN_TO_BE_REPLACED

The corporate industry is notoriously famous for having the highest pay grade difference for employees working in the same company at different levels doing the same or similar jobs. This difference attracts several young engineers and management graduates into this... END_OF_DOCUMENT_TOKEN_TO_BE_REPLACED