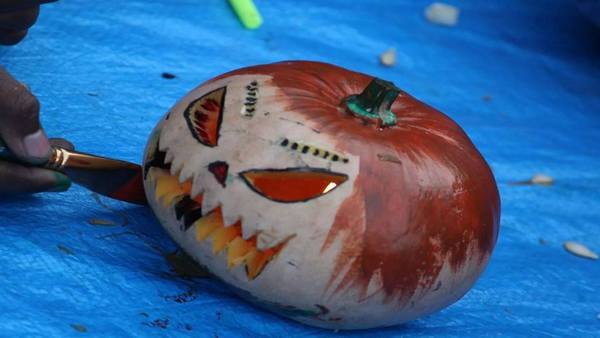 Come sit by the fire,for the night is long and I have a strange and a curious tale to tell. It all started when we were walking towards it and the ground which was roaring till then was abruptly draped in silence. We were certain that someone was watching us. It was too late to back out, we knew that this climax was inevitable! Woooo too much halloween spirit there!

To those who have no idea what I was rambling on about, let me brief you guys on what halloween is. Halloween, also known as All hallows eve , is a yearly celebration observed in a number of countries(western). It is that time of the year which is dedicated to remembering the dead, including saints (hallows), martyrs, and all the faithful departed believers. Basically a festival of the dead, people believe that it is that one night of the year when the souls of the dead are said to revisit their homes.

Candles are be lit and prayers formally offered for the souls of the dead. After this the eating, drinking, and games begin. These candles also have a significance-it is said that candles burning in every room were to guide the souls back to visit their earthly homes. These were known as “soul lights”. In the old English culture, candlelit processions would be carried out and barns and homes were blessed to protect the innocent from the evil. It is now widely celebrated by people of all social, racial and religious background.

Coming to the fun part, on this day people dress up in scary costumes and parade on the streets. The annual New York Halloween Parade in New York City, is the world’s largest Halloween parade. Most of these costumes are influenced by supernatural and horror characters like Dracula, Frankenstein’s monster, The Mummy etc.

Trick-or-Treating is a must for children on this day; they dress in costumes and go from house to house asking for candy with the question “trick or treat?” People visit haunted attractions ( Yep!Annabelle is trending today! ) Jack-o-lanterns are placed outside the houses. These are basically pumpkins whose top is cut off and the flesh inside is scooped out and then a monstrous face, is carved out of the pumpkin’s rind to expose the hollow interior. To create a lantern effect a glowing candle is placed inside. In folklore, Jack-o-lantern is used to represent a soul whose entry has been denied into both hell and heaven and is said to roam on the earth forever. It used to scare off evil spirits. (Don’t go to the grave yards carrying a pumpkin,silly! It doesn’t work 😉

KMIT hosted a pumpkin carving competition on the occasion of halloween and it was amazing! Many students turned up excited to embrace this western tradition. With a good ol’ pumpkin in our hands, a sense of competition and an intention to have an absolute smashing time, we rolled up our sleeves,laid out the newspaper, got out our best knives and scooping spoons and let creativity work take over. With a deadline of 40 minutes and with no clue what our pumpkins would look like, we started carving. And look what we made!

All the jack-o-lanterns turned out to look amazing. Some of the pumpkins donned cute little hats, had scary teeth and even had leaves coming out of their heads. For first timers, this was not that bad actually!

We weren’t fighting for the prize, we were fighting for who has the best fun! And on the basis of that everybody won.  After the competition, our jack-o-lanterns were displayed in front of Block-E.

And coming to the winners, science took the first prize.

1. First prize -Aishwarya Reddy and team for classic half moon eyes and science. 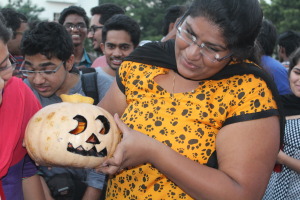 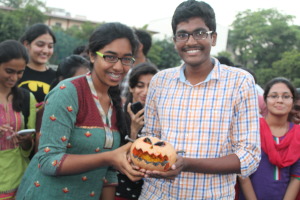 3. Third prize -Sudhanshu and Chandrashekar for the tribal style pumpkins. 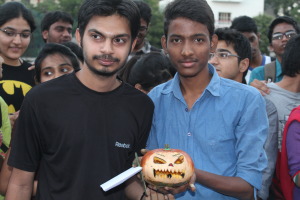 Shadows of a thousand years rise again unseen,
Voices whisper in the trees, “Tonight is Halloween!”
*does a dramatic evil laugh*

“How long are you planning to cry and sleep in here?” I asked her, as I raised the blinds in her dark bedroom. Seeing the chocolate wrappers and empty Ramen cups spread across the room, I couldn't help but sigh.... END_OF_DOCUMENT_TOKEN_TO_BE_REPLACED

[Trigger Warning] The following article contains acts of cruelty and violence. Reader discretion is advised. I opened my laptop, exhausted from all the classes at college, (not) ready to log in to another class when I stumbled upon “Monster: The... END_OF_DOCUMENT_TOKEN_TO_BE_REPLACED

“THE SWAT TEAM BURST IN. THERE WAS CURTIS GREEN COVERED IN COCAINE AND FLANKED BY TWO CHIHUAHUAS” ~The Untold Story of Silk Road by WIRED In early 2011, law enforcement agencies were caught with their pants down when drugs began... END_OF_DOCUMENT_TOKEN_TO_BE_REPLACED

“What is it about being blind that it makes you want to walk the dog the whole time?” “When it comes to environment, it's not us but our children and our children's children that will pay for our mistakes, which... END_OF_DOCUMENT_TOKEN_TO_BE_REPLACED

Comfort space is personal to every individual. It allows you to be yourself and cherish the moments as they are with no judgment whatsoever. As for me, movies and music do the job. Speaking about movies, I have been exposed... END_OF_DOCUMENT_TOKEN_TO_BE_REPLACED