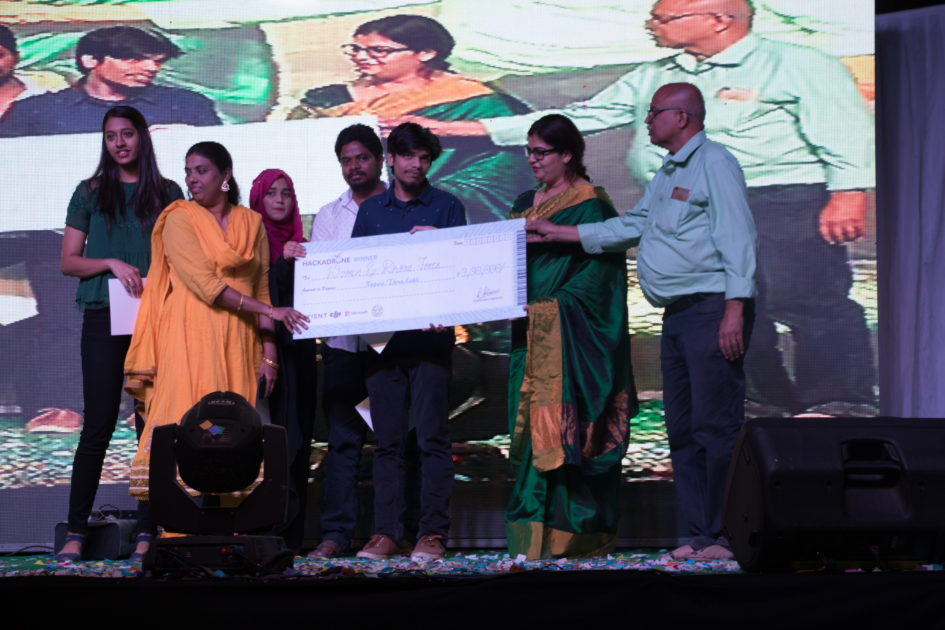 Hackadrone 2018 – India’s first UAV Hackathon – which took place from February 5-9 received close to 4500 registrations and a total of 617 proposals. Seven teams that included college students, tech professionals, and developers from across India were selected for the final round held at the Learning and Development Center at Cyient in Hyderabad.

The winning solution was developed and presented by Team Women & Drone Force, who were none other than KMIT’s very own Pragnya Kondrakunta, Fatima ma’am, and Swapna Bhandari ma’am.

Their solution was such that the victim, when under threat, can send an alert to the control station, which, in turn, deploys a UAV to the victim’s location, providing a 360⁰ view of the scene to the station, ensuring immediate, preventive action.

So, we sat down with the winners for a little chat. Here’s how it went:

What inspired you to take on the project?

“Safety is always an issue for working women across India who need to travel during the late hours. We read an article in the newspaper about the She Shuttles that dropped women techies off at the bus-stops late at nights, from where they had to travel home; this was the time period during which majority of the untoward incidents took place. Thus, the idea of 24*7 drone surveillance for women safety took birth.”

So, how did you all come together as a team?

“Hackadrone was a common discussion going around in R&D for many weeks. We would get together in the R&D to filter topics for the competition, and we also needed a women empowered team for this project.”

How long did it take to get a working model of this project ready?

“We began on the 7th of January and it took us about a month to develop the whole project.”

Tell us about the major difficulties that you faced along the way.

“We do not consider it as a difficulty, but more like a challenge. The drone that we used was a low-cost version with limited features, as compared to the other participants’. We also went with the perspective of implementation of this project with high scalability, hence making it cost efficient was a major aspect.”

Could you tell us something about the 5 days of competition?

“We were given a drone on which we were supposed to implement the project, which was subject to daily evaluation of the progress over the course of the competition. So, their judgement was based on our performance there. We also had in-house support from the college in the form of Anuroop Shannu from ECE-A and Mr. B. Madhukar Sir, who worked on a similar drone here in R&D and helped us through any difficulties we faced.”

“There is still scope for improvement. But as is, the project is ready to be deployed on a large scale if the Govt. of Telangana wishes to. The I.T. Minister of Telangana, Mr. K.T. Rama Rao has promised us a POC (Proof of Concept). Let’s see what the future holds.”

Did you know that only one in three Indians would object to their privacy being breached? This is according to a 2014 survey conducted by Pew Research Centre. It is apparent that a lot of Indians wouldn’t mind trading their... END_OF_DOCUMENT_TOKEN_TO_BE_REPLACED

Basketball is special. The lack of protective gear and condensed size of the playing court allows fans to have the most intimate experience of a team sport that exists. Thanks to the distinct play styles, basketball allows players to develop... END_OF_DOCUMENT_TOKEN_TO_BE_REPLACED

Imagine a clean world. It does not have war, poverty, or hunger. Fancy a universe out there, that lives in binary- yin or yang, good or bad, black or white. There is no gray area, no room for error or... END_OF_DOCUMENT_TOKEN_TO_BE_REPLACED

Football is the most famous sport on earth with an estimated 3.5 billion followers. Many people who may not be regular connoisseurs of the sport still watch the major International trophies like the FIFA World Cup, the UEFA Euros, the... END_OF_DOCUMENT_TOKEN_TO_BE_REPLACED

Every time my dad and I go on a long drive, we always tend to have serious discussions that range from my career choices to a wrong selection in the Indian cricket team for an important match. On one particular... END_OF_DOCUMENT_TOKEN_TO_BE_REPLACED