What if I told you there is a place in Hyderabad where you can chill with your friends and watch your favourite sitcom F.R.I.E.N.D.S sitting on the same iconic couch? You wouldn’t believe me, would you? But our city  got its very own Central Perk a couple months ago. People get disappointed when you market with the name “Central Perk” and create loads of  hype and you find the place is anything but it. That is exactly what happened with us. Let me tell you that this place looks nothing like the original café except for the orange couch (which is also exactly not the same).  It is just a F.R.I.E.N.D.S themed café where the show is played non-stop. The walls have pictures of few iconic scenes and catchphrases of the series. That is it. 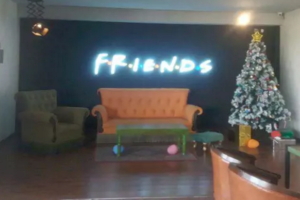 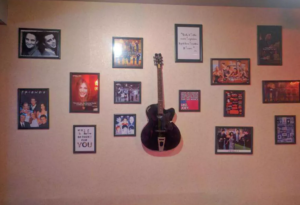 It was hard to locate the place since it was put up on the top floor of a  building under construction and had no boards or signs. It has both indoor and outdoor seating and a separate section for hookah which is impressive. You might want to take a seat indoors if you are a non-smoker. The place was crowded as it was a weekend.

They tried to give an “F.R.I.E.N.D.S”-y touch to the menu by putting “The one with” before every section. Coming to the food, we had mocktails (Moo point virgin mojito-add to your order already) first which were very refreshing. Later, we ordered fries and fried rice. Just. Awesome. It was the best fried rice I ever ate. Must try. The staff were few in number but quick. 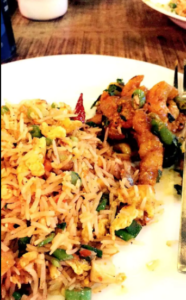 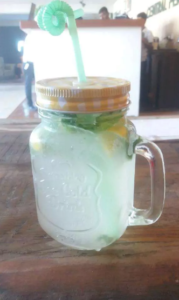 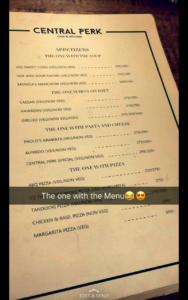 The place is amazing but it doesn’t really have the authentic feel of “F.R.I.E.N.D.S”. They had an admirable start and me visiting again is a sure thing. There’s definitely more to come since it has just come up. Walk in just like it is any other hangout place and you’ll love it.

P.S. – The pics were taken from Zomato. Sorry, I was starving so the thought of clicking snaps was out of my mind.

Ayrton Senna. A man whose legacy lives on to this day. Most modern-day drivers look up to him. He has won 41 Grand Prix in 162 races, has been on the podium 80 times, and has won the world drivers championship... END_OF_DOCUMENT_TOKEN_TO_BE_REPLACED

“Hand me the gun and don’t move a muscle”, an injured Shankar Narayan whispers to his son, while they take cover under an old Contessa. The little boy does exactly as his father says, his hands trembling, desperately trying to... END_OF_DOCUMENT_TOKEN_TO_BE_REPLACED

The scene opens in a jury room, where a decision is to be taken on the death sentence of a man accused of murder. After voting, each juror explains why they feel the accused is guilty or not guilty. One... END_OF_DOCUMENT_TOKEN_TO_BE_REPLACED

As the night grew darker, enveloping an empty street with mystery and fear, it embraced two college students, Matteo and Ace. Drunk and floundering into the dark alley, they hadn't realised how far they had wandered until they came across... END_OF_DOCUMENT_TOKEN_TO_BE_REPLACED