The Boy Who Defied Death 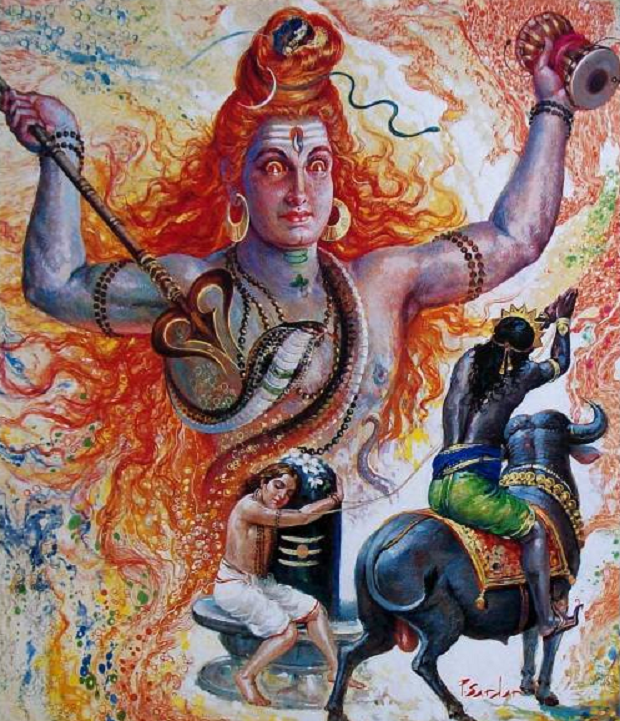 Decrypting the legend and iconography of Markandeya

DISCLAIMER: The following article aims to comprehend the legend and iconography of Markandeya from the author’s point of view and does not intend to hurt the sentiments of any individual or group. The stories mentioned in the article may/may not differ from the numerous representations of the legend despite the central idea being the same.

When we ponder over this idea of ‘Vidhi’, we tend to question that if she is not answerable to either the creation or the creator, then how Lord Shiva can change her while saving Markandeya? Is fate beyond the bounds of God, is destiny shackled in the high heavens? To analyze these questions we need to understand the etymology of the word author and creator.

God is the creator of destiny (fate) but destiny (fate) has no author. She is personified as Vidhi. She binds the creation and the creator. Every entity is under her command. Even the gods are bound to her and hence we have the phrase ‘Vidhi ka Vidhaan’ (legislation of fate) not ‘Eeshwar ka Vidhan’ (legislation of God). It was the destiny of Markandeya to live despite Lord Shiva stating his death post 16 summers from his birth. 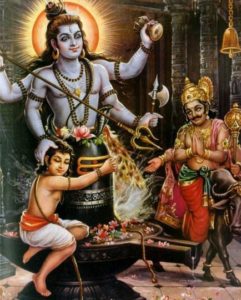 Now let us begin our journey to decrypt the iconography and decipher the complex ideology expressed through subtle images and stories.

Pleased with the Putrakameshti (literally: desiring a child) tapasya (meditation involving one pointed concentration towards the almighty with the desire of obtaining a boon) of Rishi Mrikandu and his wife Marudmati, Lord Shiva appeared before them and asked which boon did they desire for. When they explained that they wished to have a child, Lord Shiva replied that they can either beget a son who would defy death for a hundred years but be deprived of intellect or a son who shall be amongst the brightest minds to have walked on the face of earth but leave the material world at the tender age of sixteen. Rishi Mrikandu and Marudmati chose the latter and true to Lord’s word the child, who was later named Markandeya, had obtained the knowledge of Vedas and other holy scriptures at a very young age.

Fifteen springs had passed since his birth and one day he saw his parents in agony, weeping incessantly. When he asked them what was troubling them to such a great extent, they narrated the story of his birth to him. Markandeya was quick to respond that he will worship Lord Shiva as he had complete faith that Shiva would help him. Without a moment’s delay he straight away headed towards the seashore and upon reaching there he constructed a Shiva Linga (aniconic form in which Shiva is generally worshipped) out of the dry sand. His devotion, faith, and Tapa (internal energy developed by shunning the material goods) were strong enough to hold the dry sand together without the need for water.

Days turned months, yet Markandeya didn’t twitch from his position and continued to worship Shiva, chanting his holy names; when suddenly he felt a strong force pulling him by his neck which seemed to be shackled in a rope. When he opened his eyes he found Yama, the god of death, riding on his water buffalo, had winded his noose around Markandeya’s neck, pulling him towards the realm of death. Markandeya refused to come to him, explaining that though he had obtained the knowledge he was capable of, his parents needed him, however, Yamaraja stated that death is inevitable and he continued to pull him closer.

Markandeya tightly held the Shiva Linga, and as soon as the end of the rope caressed the Linga, up came the lord of time and space, from whom the infinity emerges and is again subdued in the infinite, Karpoora gauram (as white as Camphor), Chandrashekhara (wielder of moon), Jatadhari (the one with matted hair), Gangadhar (lord of the holy Ganga), Shiva. He held his trident, Trishula, against Yama’s chest, warning him if he dared to touch his devotee he shall cease to exist. Yama having succumbed to the Lord's wrath, headed back to his abode. Lord Shiva later granted the boon of immortality to Markandeya and from then Markandeya continued/continues to inspire and educate the people on earth. 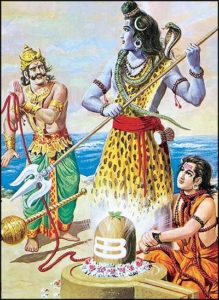 The story of Markandeya is nested on the grounds of faith and devotion. We will try to comprehend its Bhaavaarth (meaning of its emotion). We use the word ‘Bhaavaarth’, against the words ‘Bhaav’ (emotion) or ‘Artha’ (meaning). ‘Bhaav’ is the emotion and essence of the story, and ‘Artha’ is the eternal truth, but ‘Bhaavaarth’ is beyond them. Every person has a different perspective and hence possess a distinct vision, which gives birth to numerous Bhaavaarths, from numerous perspectives. Let us decrypt this story from one such perspective.

The asking of the boon for a son by Mrikandu and Marudmati indicates the human tendency of desire and aspiration to leave something behind after one’s material life. The incident of them choosing a wise child indicate that though the pleasures seem to be long-lived yet one must abide by the principles of Satya (truth) and Indriya Nigraha (governing of senses). The incident of Markandeya choosing life not for himself but for the sake of his parents indicates the concept of selflessness.

If we are able to make a list of all the evils present in a human then the first would be Ego. Ego or Ahamkaar is responsible for the death of Ravana and Kamsa. On the other hand, the greatest power of a human is his faith. This is what helped Shivaji rise to the title of Chatrapati or the freedom fighters to help us obtain independence. This ego, personified as the moon, when eclipses the human, personified as Earth, does not allow the aura of divinity, personified as the rays of Sun. Only through devotion and faith in oneself, and the work we do, can we obtain the rays. 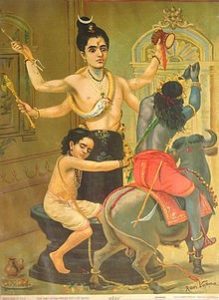 This subtle revelation is depicted innumerously through imagery. It is the tale of conquering Ahamkaar (ego) with the help of Aatma Shakti (inner strength) through Indriya Nigraha (governing of senses and emotion) to achieve Amritva (immortality). 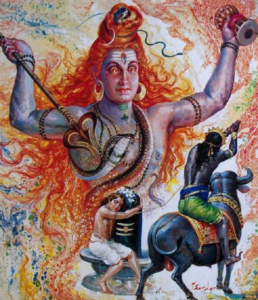 The palette sat on the table, its many children crawling to play with each other. I dip my brush into the palette, squidge it into the deepest shade of blue until the bristles get covered in blue up to their... END_OF_DOCUMENT_TOKEN_TO_BE_REPLACED

"Animation is not the art of drawings that move but the art of movements that are drawn” ~Norman Mclaren. Some things in life don’t change, like the craze we have for animation. Right from adoring our childhood shows to never... END_OF_DOCUMENT_TOKEN_TO_BE_REPLACED

What’s wrong with the title? Has there been a mistake or has the writer gone crazy? Would you believe me if I tell you that nothing is wrong at all? Here’s the trick-Replace each letter of the title with its... END_OF_DOCUMENT_TOKEN_TO_BE_REPLACED

In a world of change, the only thing constant is the effort to make a difference. While we all desire to be our finest selves, the path to being better is a rocky road. There are some days where we... END_OF_DOCUMENT_TOKEN_TO_BE_REPLACED