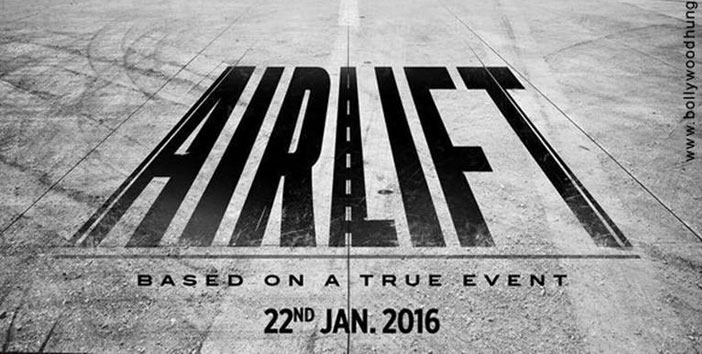 Airlift witnesses one of the most remarkable events in the history. The movie is based on the world’s largest civil evacuation of over 1, 70,000 Indians who were stranded in Kuwait. Akshay Kumar essays the role of Ranjit Katyal, a Kuwait based businessman of Indian origin. Nimrat Kaur plays his on­-screen wife Amrita. Kuwait city was attacked by Iraqi forces in August 1990. When Ranjit is informed about this news he is awoken rudely from his slumber. As soon as he learns that Saddam Hussein had ordered this invasion, he asks his wife to take their child and fly to London for few days until the situation cools down. Later Katyal goes to Baghdad to try flee out of Kuwait.Katyal’s friend in Iraq, Major Halaf (essayed by Inaamulhaq) discloses the news to Katyal, that an Indian merchant ship is due to arrive in Iraq and so he can permit 500 Indians to leave on the ship. Katyal returns to Kuwait with the news. He is grateful to the Major. No sooner Katyal receives the distressing news, that there is a UN embargo and so the ships were barred from entering or leaving Iraq.

Some of the most engrossing moments in the deviously scripted war thriller find Ranjit Katyal making contact with Sanjeev Kohli (portrayed by Kumud Mishra), an Indian officer in Ministry of  External Affairs (MoEA) in the hope of getting help from Indian government. Then there is this lovely little scene in Sanjeev Kohli’s tiny home where his father,a partition refugee, reminds his son what the loss of homeland means to an individual. Another one’s where Ranjit Katyal plays a bluff with a quirky, menacing Iraqi army chief (Inaamulhaq) during dinner is laced with sly tension.

Amrita has one important outburst sequence where she tells off one of the nuisance making refugee who was constantly questioning and insulting her husband’s heroism. Ibrahim Durrani (played by Purab Kohli) is engaging as a man searching for his missing wife in the crisis, redeeming his loss by saving a helpless young Kuwaiti woman from sure death. Finally all the Indians board the plane and arrive in Jordan.

The movie ends on a great note, where all Indian soldiers salute the Katyals as they board the planes that will take them home. Air India holds the Guinness book of world records for the most people evacuated in a civil airline as a result of this effort. A total of 488 Air India civil planes were used to evacuate 1, 70,000 refugees in 59 days.

All in all this movie is a must watch for everyone.

Comfort space is personal to every individual. It allows you to be yourself and cherish the moments as they are with no judgment whatsoever. As for me, movies and music do the job. Speaking about movies, I have been exposed... END_OF_DOCUMENT_TOKEN_TO_BE_REPLACED

Well, well, well. Something interesting has finally caught your attention in this painfully boring and monotonous life. You dash to the most convenient online marketplace to find the materialistic item that fuels your dopamine rush. These platforms help connect buyers... END_OF_DOCUMENT_TOKEN_TO_BE_REPLACED

Growing up watching Sci-fi movies, I always imagined myself living in a fully automated world with all these cool tech devices- flying sneakers, teleportation units, and whatnot. Something as dreamy as the “first cognitive city” proposed to be built in... END_OF_DOCUMENT_TOKEN_TO_BE_REPLACED

For the fourth time this week, I woke up at my desk. It wasn’t very comfortable: most of the space was taken up by an assortment of empty Red Bull cans and coffee cups. Clutter never bothered me though, it’s... END_OF_DOCUMENT_TOKEN_TO_BE_REPLACED