Ahmed Mohamed and his clock!

Unless you’ve been living under a rock, you already know about the so called “Whiz-kid of the Week” Ahmed Mohamed. Ahmed is a 14 year old school kid, who apparently assembled a digital clock with circuit board and a power supply connected to a digital display, sitting in his bedroom in about 20 minutes to impress his teacher. Being a Muslim and a freshman, school officials (Like most people) thought it was a bomb and pushed Ahmed out of the class. In no time, the police put him in handcuffs, and he was suspended from MacArthur High School. The photo of a 14 year old boy with handcuffs, wearing a NASA T-Shirt went viral all over social media, and #IStandWithAhmed started trending on twitter with over 80,000 tweets in about an hour! 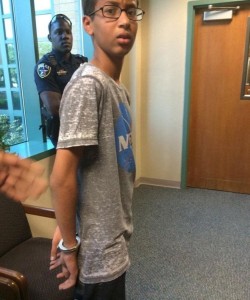 Though having reasonable accusations that he didn’t even build the clock, but just opened up an existing one and replaced the container, Ahmed’s situation has sparked discussions and debates all over the world on racial profiling and Islamophobia. This is a sad truth for western Muslims; most of them can put themselves in Ahmed’s shoes. Ahmed received support from great masses including some really important people like Mark Zuckerburg, Hillary Clinton, and President Barack Obama who also invited him to visit the White House with the clock.

Now I don’t know if Ahmed really “invented” a clock like he claims to have or not, but I’m happy to see his situation turn positive via the internet. They could have their reasons, but I feel it was completely unnecessary for the school administration and the police to overreact. But considering how it is completely necessary to doubt and discriminate Muslims, it’s a pleasant surprise to see so many people taking a stance against it. Sadly, not all Muslims are this lucky, and have accepted this unusual mistreatment as a normal part of their lives! Every child has the right to grow up without having the fear of being criminalized. So, I hope #IStandWithAhmed teaches us how to nurture curiosity, and give all forms of hate a back seat.

All the best Ahmed!

Did your 8-year-old self ever wish for that awesome Pixar movie that you watched, and you watched, then you watched again, to be real? Because I did!  I had a dream. I wished I was a car so that I... END_OF_DOCUMENT_TOKEN_TO_BE_REPLACED

“Hand me the gun and don’t move a muscle”, an injured Shankar Narayan whispers to his son, while they take cover under an old Contessa. The little boy does exactly as his father says, his hands trembling, desperately trying to... END_OF_DOCUMENT_TOKEN_TO_BE_REPLACED

Faith has always been considered as one of the most inherently pure and pious things, across any and every religion and every school of a belief system based on the concept of God. That is probably because every single one... END_OF_DOCUMENT_TOKEN_TO_BE_REPLACED

As the night grew darker, enveloping an empty street with mystery and fear, it embraced two college students, Matteo and Ace. Drunk and floundering into the dark alley, they hadn't realised how far they had wandered until they came across... END_OF_DOCUMENT_TOKEN_TO_BE_REPLACED