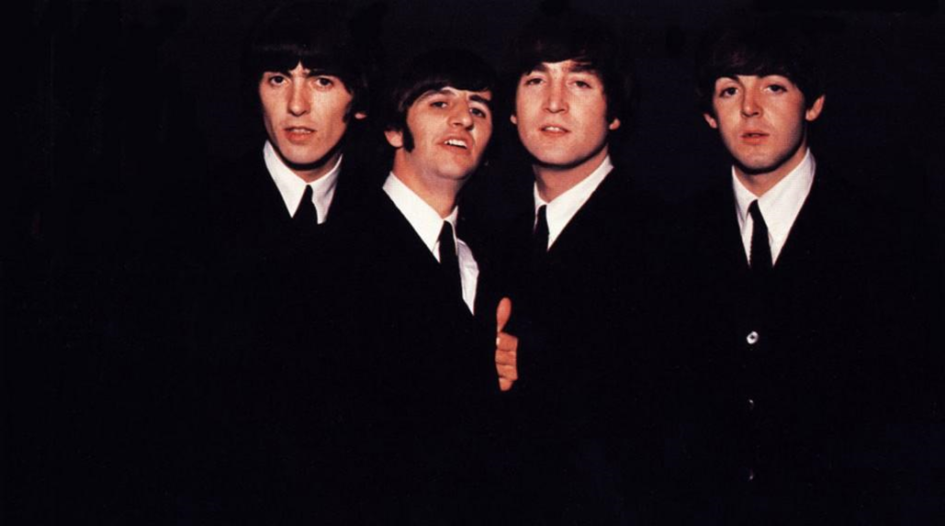 It was 1960 when the world was recovering from the magic that Elvis Presley had left before his hiatus and little did the people know that there were four teenagers from Liverpool, signed to Parlophone records, who were doing the rounds in Hamburg, would make music so strong and thoughtful that it would leave generations that came after it in awe. The words so magical that they would stick in the listeners heads every time they heard their tracks and also would make them think about it after they were done. Their music would strike a revolution and change the world as we knew it. These four Brits came to be known to the world as The Beatles.

What was so special about these four? I mean sure, there were other artists/musicians who were just as good as them, but what made them special?

Here’s the thing… A good band generally has one good singer-songwriter, the best bands out there have two, but, the deal with The Beatles was that there were three, although the third one blossomed a little later, but they surely did have three great singer-songwriters. This is not it, they had an extremely creative manager called Brian Epstein (also called as the fifth Beatle) and The Beatles also had a beautiful grand master for a Producer, goes by the name of George Martin. (No, not George RR Martin!)

The relentless hours they put into their shtick, the natural genius that they possessed, the way they thought and their cocky attitude is what made these guys the greatest of the greats. Not everyone can pull that off, actually no one has, that’s why there never were or are anyone quite like The Beatles. But these guys had a very short lived time together as a musical group, from 1962 to 1966 is where the magic all happened.

Who were the Beatles?

The Beatles consisted of John Lennon on the Rhythm Guitar, Paul McCartney on bass guitar, George Harrison on Lead guitar and Ringo Starr on Drums. 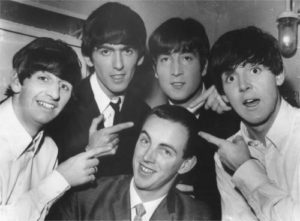 Out of all the albums they made in a decade, my personal favourite is ‘Sgt. Peppers’, which was their eighth studio album, followed by ‘Yellow Submarine’, which was a sequel of sorts to Sgt.Peppers, and lastly their final studio album ‘Abbey Road’.

They were spotted by Brian Epstein in 1960s and he did his managerial magic, and they made an LP and started their first of five tours to Germany so called by Beatlemaniacs as ‘The Invasion’, which is where they played at pubs and bars for five-seven hours a night, playing for all sorts of people from rich businessmen to truck drivers to mob-bosses and gangsters, which is what made them a tight live band.

Slowly after people started listening to their original composition is when the ‘Beatle-mania’ started. But they weren’t already big, they still had one frontier to get to before they became the biggest band in the world, and that place was no other place but The United States of America, this is where the burst happened and they were the first true ‘rock stars’ , after which they made amazing albums such as ‘A Hard Day’s Night’, ‘Rubber Soul’, ‘Beatles for Sale’, ‘Help!’, ’The Beatles’ (also called as The White Album) and many more!

They went on to make a few films based on themselves, which went on to be hits as well!

Here are a few glimpses from their times… 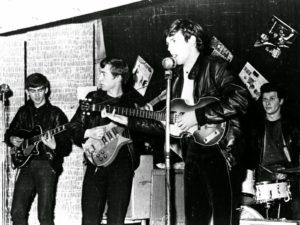 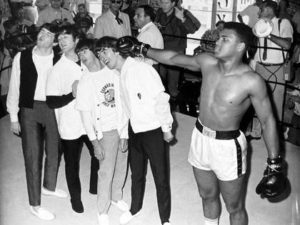 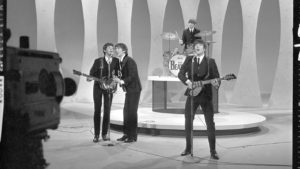 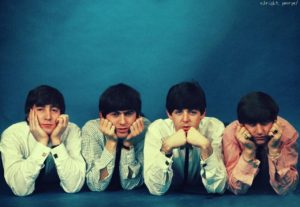 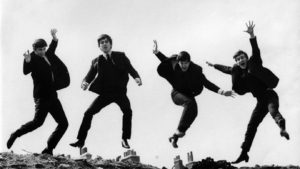 Although ‘Let It Be’ was their final studio album in terms of its release,  the songs for ‘Let It Be’ were already made way before they even started writing songs for Abbey Road, hence, to me Abbey Road is their studio final album, after which the band broke up.

The reason for their break-up was that they were getting artistically bored, and that their fame was really eating them up. No one was really listening to their music, girls were shouting at the top of their voices at the stadiums and even The Beatles couldn’t hear their music! They were losing track of as to where they really were at a particular instant in a song, and as Ringo Starr quoted…”We really were getting a loose band slowly, and we didn’t want that to happen.” 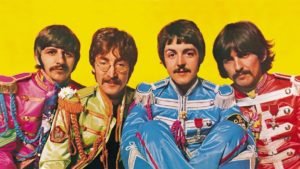 The Beatles in their Sgt. Peppers outfits; Source: Google;

So after making Abbey Road, The Beatles decided that they would do a roof-top show on 30th January 1969 and that would be it, that’s all, the world would never see these four playing together, ever again. That was to be their final gig together. 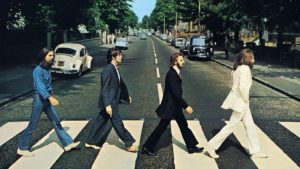 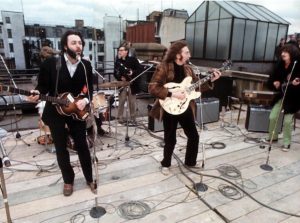 The final concert they played on the rooftop of Apple Records headquarters; Source: Google Images;

I don’t know any of The Beatles personally, but the way they crafted their art made me seem as if they really were just mine, like I relate to them in some way.

My personal favourite songs are:

Although ten songs aren’t enough to express my love for The Beatles, I’ll let you guys discover them by yourselves!

Thing is, it doesn’t matter as to what age group you might be of or from what part of the world you come from, I’m sure that you can find a piece of yourself in the songs of The Beatles, just give it the attention it needs, I’m sure you will.

So, what happened after they broke up? 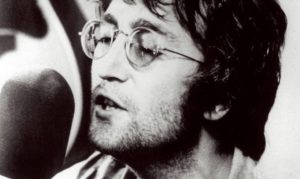 John Lennon went on to make his own music and moving to New York City by 1979 along with his then wife Yoko Ono, they had a boy named Sean Lennon. Unaware that his time was limited, Lennon made music with other great artists and went on to make great albums along with Yoko Ono, even after the break. One of his biggest hits was called ‘Imagine’. He went on to orchestrate the ‘Bed IN’ where he and his wife sat in their beds and spoke about peace, supporting the Counter Culture movement of the 1970s and was an important figure for the movement.

He was murdered on 8th December 1980 by Mark David Chapman. His reason for the murder was that Lennon was way to popular. 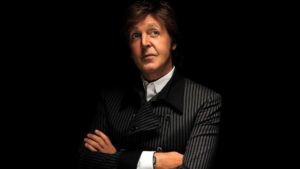 While he had already proven his worth as a great Singer-Songwriter, Sir Paul McCartney continued his upwards trajectory to become recognized as one of the most successful musicians of all time. Aged 74, he’s doing just about fine. In 1997 he was knighted for his contributions in music. 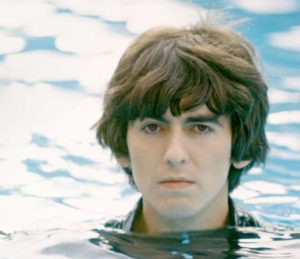 The first one to break away from The Beatles, George Harrison then moved to Classical Indian music, learning the Sitar from none other than the great Indian Sitar player Shri Shri Ravi Shankar and went on to preach Hinduism. Harrison continued his musical ventures and also went on to make films, but his roots made him stay in music. 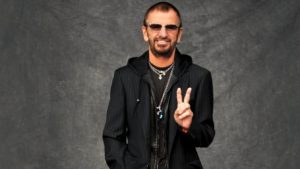 Ringo Starr went on to flourish in his solo career and even got the other Beatles on his records, but on different tracks. He’s a slick rock star, a flamboyant drummer, he’s 76 , healthy and going strong! His attitude towards life is just like it was back when we he was a twenty-something. He went on to collaborate with other great artists too.

Finally, I’d like to quote The Beatles from their song ‘All you need is love’…

Ayrton Senna. A man whose legacy lives on to this day. Most modern-day drivers look up to him. He has won 41 Grand Prix in 162 races, has been on the podium 80 times, and has won the world drivers championship... END_OF_DOCUMENT_TOKEN_TO_BE_REPLACED

Faith has always been considered as one of the most inherently pure and pious things, across any and every religion and every school of a belief system based on the concept of God. That is probably because every single one... END_OF_DOCUMENT_TOKEN_TO_BE_REPLACED

Did your 8-year-old self ever wish for that awesome Pixar movie that you watched, and you watched, then you watched again, to be real? Because I did!  I had a dream. I wished I was a car so that I... END_OF_DOCUMENT_TOKEN_TO_BE_REPLACED

As the night grew darker, enveloping an empty street with mystery and fear, it embraced two college students, Matteo and Ace. Drunk and floundering into the dark alley, they hadn't realised how far they had wandered until they came across... END_OF_DOCUMENT_TOKEN_TO_BE_REPLACED

The scene opens in a jury room, where a decision is to be taken on the death sentence of a man accused of murder. After voting, each juror explains why they feel the accused is guilty or not guilty. One... END_OF_DOCUMENT_TOKEN_TO_BE_REPLACED