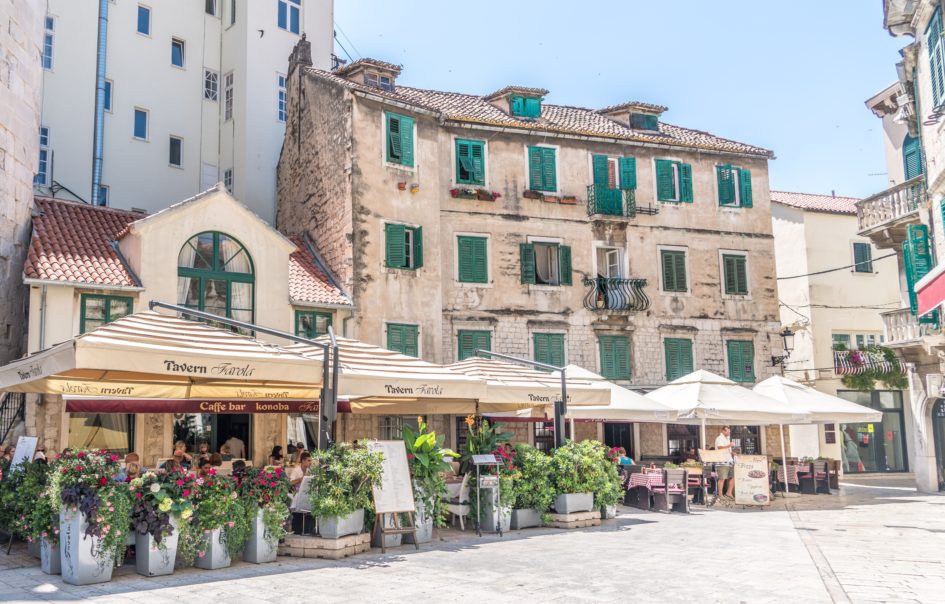 She woke up to the sound of the chirping of birds and opened her eyes as the sun rays fell across her face. After a minute of basking in the warmth of the sun, she got out of her bed, groggy, but eager, to get a start on the day. The smell of bread and pastries wafted in through the open windows, making her stomach rumble. She crossed her way across the room to lean out of the window, looking for the source of the smell. She wasn’t surprised when she saw Gustav standing in his usual spot at the corner of the street, whistling to a new tune in his head.

It didn’t take her long to get ready and leave her little apartment. She passed by the ornate doors of the elevator on her way out, saying hello to the lovely couple waiting on her floor. The long, spiral staircase winded her on most days, but today, it looked inviting. Humming to herself, she quickly made her way out of the building. It was summer, and the weather certainly seemed to agree with the people milling about on the cobbled streets. It was a short walk to the charming little café she owned.

Elysium, as she had named it, was the pride and joy of her life. Coffee and desserts had always been something she’d liked as a child. She smiled fondly as she remembered how often her mother had cribbed every time she chose desserts over the main course. It had taken her a long time and a lot of late nights working, but the smile she saw on peoples’ faces as they walked out of her café was worth it. Nestled between a boutique and a flower store, Elysium was very charming to look at. With its shimmery yellow walls, it was a sight for sore eyes. She had made sure to provide tables and chairs outside the café, so her customers had a place to lounge about while it was still warm outside.

The bell on top of the door tinkled as she made her way in. Rob and Natalie were already inside, working on their tasks for the day. She spoke with Nat while preparing a coffee pot for the employees. Elysium was slowly diversifying its client base. As a start into the venture, she had agreed to deliver some pastries to a children’s’ hospital nearby. She went into the kitchen to begin the actual baking process. The next few hours passed by in a haze of flour, eggs and the satisfaction that she had always felt after making desserts out of scratch. Her love for baking was also a major reason behind opening her own café.

After making sure the pastries had been delivered safely, she made her way into the actual café. She liked observing her customers’ reactions as they took the first sip of their drinks and the first bite of their food. Today was no different. All the tables were filled and there was joy and laughter in the air. As she was about to turn away from the counter, she heard the voice of a dear friend.

What took you so long today, child? I’ve been waiting to talk to you.

Arthur Boucher was an old man, but he had the energy of a much younger one. He was one of her loyal customers, and also, her first when she thought about it. He was at Elysium every day and she knew that she’d come to see him as family. All of them were family, she realized with a start. She had come to this beautiful city years ago, full of dreams. Holding on to her bags, she had promised herself to make the most of this new opportunity. Her eyes welled up with happy tears as she knew her parents would be proud of her.

She sighed softly as she closed up her café for the day. She made herself a nice, warm cup of Cappuccino and set aside a piece of Chocolat au lait for herself. She picked up her plate and sat on one of the tables on the sidewalk. Her eyes closed as she drank her coffee, appreciating the after-taste of vanilla that it gave her. As she watched the sunset, at that moment, she knew she was inexplicably grateful for the life she had.

Growing up watching Sci-fi movies, I always imagined myself living in a fully automated world with all these cool tech devices- flying sneakers, teleportation units, and whatnot. Something as dreamy as the “first cognitive city” proposed to be built in... END_OF_DOCUMENT_TOKEN_TO_BE_REPLACED

The human touch. Such a simple thing, yet one that holds immense power. Almost like a miracle. Wonder why? Read on.  We've been gifted with the five senses, namely: vision, speech, smell, hearing, and the most beautiful of all, touch.... END_OF_DOCUMENT_TOKEN_TO_BE_REPLACED

[Trigger Warning] The following reading contains potentially distressing information about self-harm. The reader is advised to use their discretion to continue reading.   Darkness cocooned her room, her heart twisted, churned, her fingers closed around her throat, nails digging into... END_OF_DOCUMENT_TOKEN_TO_BE_REPLACED

Aren't all of us artists trying to express ourselves in this world? In my opinion, art is a form of expressing an emotion. Learning how to express our subconscious emotions and communicate with them will take time but what is... END_OF_DOCUMENT_TOKEN_TO_BE_REPLACED

Flash, Flash, Flash. Various screens show the face of the actor. A woman crying in the corner while another loves the visual of her crying. The editor looks at all of these different shots and lets out a satisfied... END_OF_DOCUMENT_TOKEN_TO_BE_REPLACED