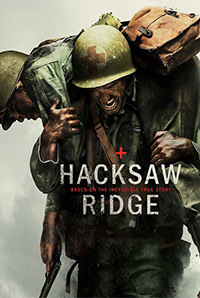 One of the most intriguing movies of 2016 was Hacksaw Ridge, based on an astoundingly true story about a combat medic who saved 75 men in Okinawa during one of the bloodiest battles of World war ll. For those who have no idea about the movie, Hacksaw Ridge is a biographical war drama film starring Andrew Garfield (The actor from the amazing Spiderman) as Desmond Doss, directed by the renowned action hero Mel Gibson. “Mel Gibson directs this true-life tale of a US army medic who refused to bear arms with great force, but little subtlety” – The Guardian. Desmond Doss was an American combat medic who was awarded the Medal of Honor for his services in the Battle of Okinawa. The battle was fought on the island of Okinawa in Japan during World war II.

The movie starts off by showing Desmond Doss nearly killing his younger brother, and his spiritual upbringing where he embraces the commandment which says- A man must not kill another man. Doss soon joins the army but refuses to use a firearm which makes him an outsider amongst the other soldiers. He’s the only American soldier in World war ll to fight on the front lines without a weapon. The film shows Doss’ struggle with his superiors and the other soldiers as he sticks to his morals and survive in the army. The battle of Okinawa was brilliantly shot and keeps you on the edge of your seat. There will be a lot of blood and gore on the screen, so that’s a heads up for the weak hearted!

Overall Hacksaw Ridge is a brilliantly directed movie which does not get tedious at any moment, and very entertainingly displays the story about a man who abjured war and stuck to his beliefs his entire life. He was the first conscientious objector to ever win the Congressional Medal of Honor. Though Hacksaw Ridge didn’t get an Oscar (for which I was rooting for), it’s a must watch for everyone.

It's just another day.  I took a glance at the calendar: 12-05-2038, Tuesday. No appointments. Neeta is busy at work; Ria and Rishi are busy with their classes online and I have to clean the old storeroom cupboard because Neeta... END_OF_DOCUMENT_TOKEN_TO_BE_REPLACED

It's hard to believe that 2020 is halfway done when the past six months have encompassed what feels like an eternity of global events with several words being added to our daily vocabulary. Terms such as “fatality rate”, “isolation”, “quarantine”,... END_OF_DOCUMENT_TOKEN_TO_BE_REPLACED

While it’s true that the circumstances surrounding this quarantine can be scary at times, I am grateful for all the time I have had to do some much-needed soul searching. The lockdown started with me constantly wanting to go out... END_OF_DOCUMENT_TOKEN_TO_BE_REPLACED

The pandemic season is upon us. At the time of writing this, we're all isolated from each other to protect ourselves and others more vulnerable than us. A by-product of this rather long isolation is just heaps of spare time.... END_OF_DOCUMENT_TOKEN_TO_BE_REPLACED

Beneath the wild sky, Here I stay in the busiest of cities. I am the tree outside your glazed windows, Swaying away to every puff of the wind. Bazillions of times, the trees along the road I stay, Have perished,... END_OF_DOCUMENT_TOKEN_TO_BE_REPLACED