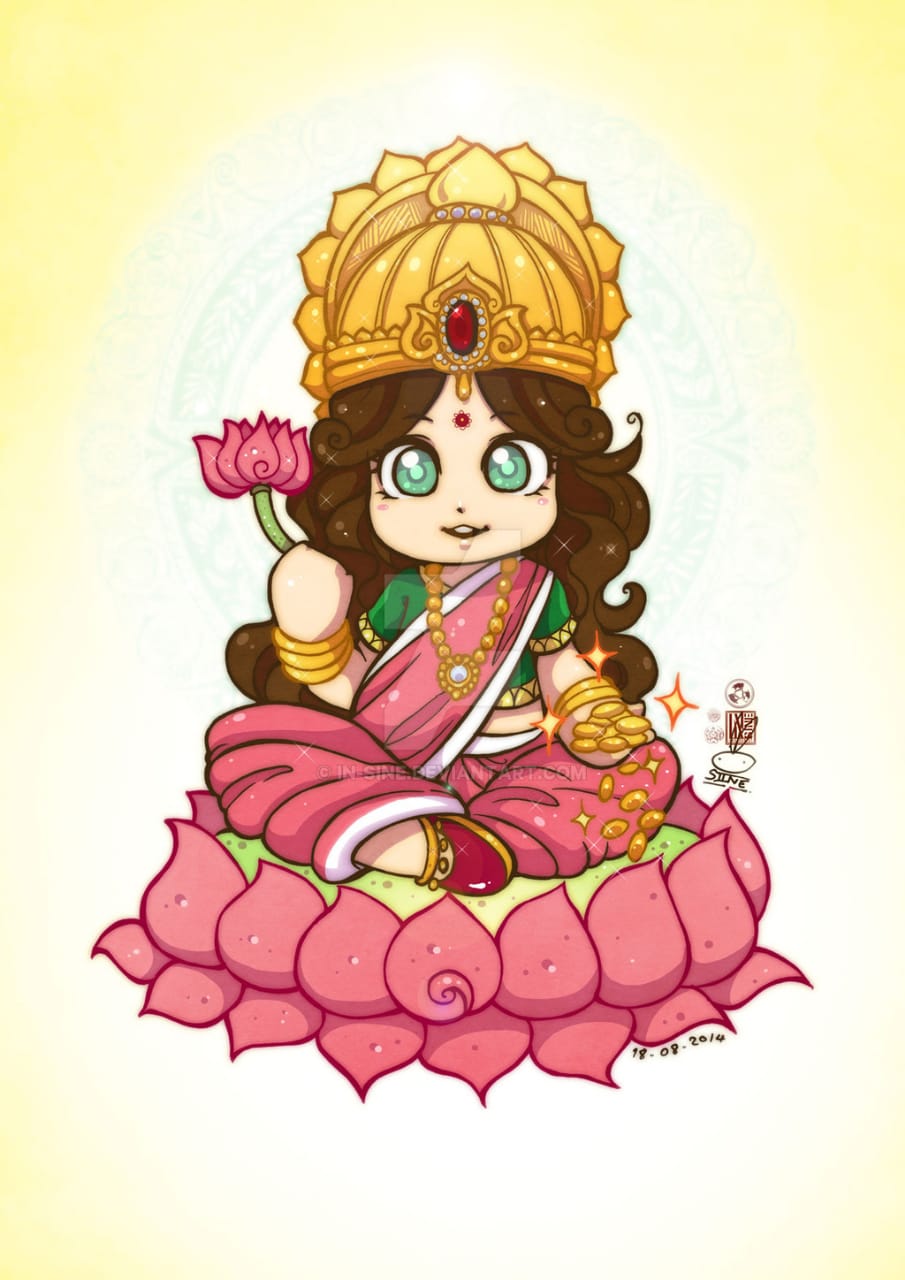 I, a poor man, wish to have money. I, a farmer, hope for a bountiful harvest. I, a herder, wish my cattle is always satisfied. I, an artist, wish my art never fades. I, a soldier, hope for the strength to fight in the battle. I, a King, wish for prosperity in my Kingdom. I, a wife, wish for my husband’s long life. I, a man, wish to father children.

There’s an ‘I’ and then there’s a wish. A subject desiring for an object, desiring an aspect of wealth (Lakshmi). Once the wealth approaches, with it, creeps in fear. Fear of losing money, spoiled grains, ill cattle, forgotten art, dying at war, a kingdom under siege, a foolhardy husband or an unruly child respectively. That is, with Lakshmi comes Alakshmi. 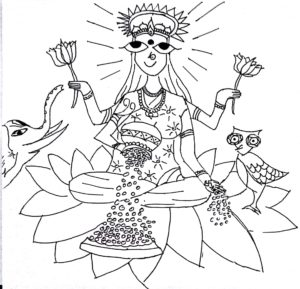 This constant conflict between the two sisters is a recurring theme in the legends and by extension, life. Just like in the story of Sagara-Manthan (the churning of the ocean). While the devas desire of Lakshmi, Alakshmi stands on their gates, anticipating the growth of their fear. When the fear becomes mediocre and hidden behind the pleasures offered by Lakshmi, devas end up committing mistakes. And thus, the gates of Amravati, their abode, open wide for Alakshmi to enter and dethrone Indra, the King of devas. Lakshmi leaves and takes her wealth with her.

Blinded by his wealth and fortune, Indra, while strolling on his elephant Airavat, throws down a mystical garland offered by Sage Durvasa, upon which the sage curses him that all his wealth which he has hoarded in his heaven shall be reduced to nothing. Because of one mistake, Lakshmi leaves Indra’s side, dissolves herself in the ocean-of-milk and Alakshmi enters the heaven bringing gloom and impotence. Thus, Indra is easily overpowered by his rival brothers, the Asuras. Frightened, he goes to Brahma for help, who directs him to Vishnu.

Vishnu asks the devas to lure Asuras into winning Amrita, the elixir of immortality and churns Lakshmi out of the ocean with their help. The Meru mountain was used as the shaft, the gigantic serpent King Vasuki as the rope and Vishnu, as Kurma (tortoise), became the base for the axle. And, then rose Lakshmi with her numerous treasures, however this time she didn’t choose Indra but wished to wed Vishnu, to which he agreed. Along with her came Dhanavantri, the physician of gods, holding the pot containing Amrita. While Asuras were about to snatch it, Vishnu took the form of an enchanting maiden, Mohini, luring the Asuras and serving them water, while devas received the Amrita. Thus becoming invincible, the devas defeated the Asuras. 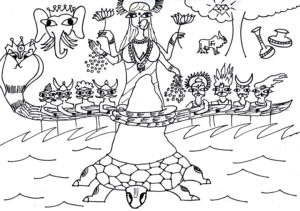 Lakshmi had earlier stayed with Indra through various objects which pleased the senses, and when she left, took her prosperity with her. She was present through Soma, the divine wine, and after she left the wine dried up; the Apsaras (celestial water nymphs) and Gandharvas (the celestial musicians) stopped dancing and singing; Ucchaishrava, the flying horse and Airavat, the majestic six-tusked white elephant, were nowhere to be found; Akshaya-patra, the ever-filled food-vessel went empty; Kalpataru, the wish-fulfilling tree, shed its leaves, the wish-fulfilling Kamdhenu’s udders became sore and the wish-fulfilling gem, Chintamani, lost its shine.

After she returned, even though she gave her prosperity back to Indra, she never truly returned to him. She chose Vishnu. What Vishnu saw in Lakshmi, was invisible to Indra. For Indra, she was an object of desire, a possession. He feared losing her but never cared for her protection. What Indra cared for, were the Indriyas, the senses, and hence became a hoarder of wealth and not a distributor.

He never acknowledged the presence of Alakshmi and hence never worried about Lakshmi. For him, Lakshmi was permanent, who is going to be by his side at all times. Little did he know that Lakshmi is whimsical, she travels and transforms, one place to another, one form to another. She can make a king a beggar; a saint, greedy; and a kin, enemy.  She can call upon Alakshmi whenever she required.

Vishnu stands humbly. He knows that Lakshmi’s ‘lakshya’, or Lakshmi’s aim is neither pleasing the senses nor shunning the desires. He understands that her lakshya is to make people realize the importance of desires and the gravity of situations which shall follow when they are fulfilled, IF they are fulfilled. For Vishnu, Alakshmi is a part of Lakshmi without whom she can never come or leave. She doesn’t desire, yet is desired by all.

While Indra focuses on her possession, Vishnu looks for her protection; making the latter Lakshmi-Vallabha, the favourite of Lakshmi, and her, Vishnu-priya, the benevolent of Vishnu.

Thus the poor, farmer, herder, artist, soldier, king, husband-wife, mother-father, are left with nothing but Alakshmi. 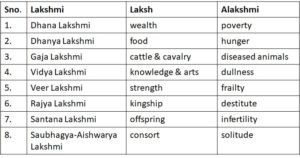 Picture a person going through a great deal of misery and sorrow because of some certain terrible circumstances they are in. What expression did you picture this person in? The majoritarian guess would probably be a sad and unhappy face.... END_OF_DOCUMENT_TOKEN_TO_BE_REPLACED

Disclaimer: The facts mentioned in this article may vary with the actual ones. "To conquer oneself is a greater victory than to conquer thousands in a battle." – Dalai Lama The second world war reached its final stage in 1945,... END_OF_DOCUMENT_TOKEN_TO_BE_REPLACED

As I take a stroll in the graveyard observing my funeral, I find a few crying and the other meticulously bored by the doings. Yet it feels so light, death actually took away the pain of my congenital disease. But... END_OF_DOCUMENT_TOKEN_TO_BE_REPLACED

"Why does Caesar get to stomp around like a giant while the rest of us try not to get smushed under his big feet? What's so great about Caesar, huh? Brutus is just as cute as Caesar. Brutus is just... END_OF_DOCUMENT_TOKEN_TO_BE_REPLACED

Trigger Warning: The following content contains a description of abuse and murder which is potentially disturbing. Readers’ discretion is advised.   Did you know that Adolf Hitler was alleged to have paranoid schizophrenia? Many Psychoanalysts pronounced that he had mental... END_OF_DOCUMENT_TOKEN_TO_BE_REPLACED