The White Tiger – A Review 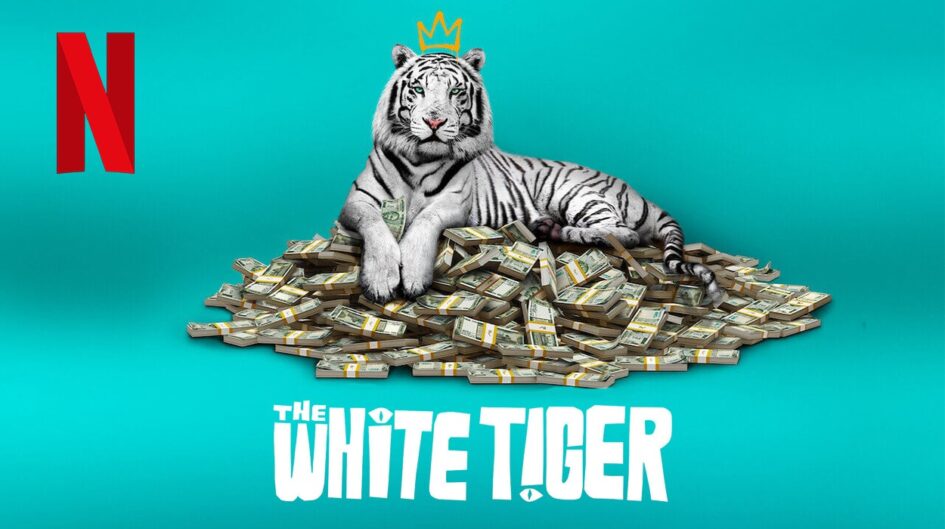 ‘The White Tiger’ is a freakish story about a man with an unfortunate past and a future enjoying fortunes. This story that Ramin Bahrani, the Iranian-American director, adapted from the 2008 Booker Prize-winning best-selling debut novel by Aravind Adiga, the Australian-Indian author, successfully charts dualities of different sorts into a single 2-hour movie. Hearing Bahrani’s name is itself a relief to a few knowing that he has always had a thing for the underdog, always doing justice to his works. (Man Push Cart, Chop Shop)

The movie glides through India obviously divided by classes, castes, and religion especially showcasing stark contrasts between the people with “big-belly” and “small-belly”. The line between the ‘bright’ side and the ‘darker’ side of India is drawn distinctly by the cinematographer Paolo Carnera. The world of ‘The White Tiger’ does a wonderful job depicting the extremes of society. But it feels that the story is very isolated showing only India with inequalities and grimness. The story seems very complex on its own but fails to show a clearer picture of society. But if that’s what the story intended to do then it was a job well done. Even though the story is woven using the threads of Indian society it doesn’t fail to connect universally.

The star of the show is Adarsh Gourav, who played the role of the protagonist Balram Halwai. The audience cheer, boo, laugh and cry as Balram Halwai desperately tries to escape the “rooster-coop”; a typical rags-to-riches story as it may appear, it is not. The story demonstrates how the Indian caste-system has evolved into a master-servant system and how deeply the desire to be a servant to their master is ingrained inside a person.

Adarsh Gourav acts his part, wonderfully at that, like the white tiger. In the jungle, like the rarest of animals that comes along only once in a generation, he tries to claw out of his poverty; switch sides from the poor to the rich. Funny as it may seem, Balram’s character is very relatable to an ‘onion’. He is not our plain vanilla protagonist. Balram is what we call an ‘anti-hero’. He has layers upon layers upon layers. As the story progresses and each layer of his character is exposed, it gradually escalates. Rajkumar Rao(Ashok) and Priyanka Chopra Jonas(Pinky Madam) play an important part in this ascent as Balram’s master and mistress respectively. Priyanka does incredibly well playing the supporting role. Rajkumar Rao did a good job but it seemed that it was not the best he could do. Also, his accent seemed too put-on to prove effective.

The story spans between the years 2007-2010, the age of rapid growth in India. Mostly, it could be guessed that the story might be outdated but it gained relatability over the years. The movie takes off in Bangalore where a rising-entrepreneur, who calls himself Balram Halwai, narrates his tale as an email to the then-Premier Wen Jiabao along with the audience. The elements of sarcasm and satire are sprinkled everywhere along the film making it very entertaining to watch.

“An Indian entrepreneur has to be straight and crooked, mocking and believing, sly and sincere, all at the same time.” These lines told by Balram at the beginning of the film seem to be obvious considering the path he had walked to escape his poverty but these lines also give us a hint about his sly and sharp-witted character which would be shown later on in the film.

As an entrepreneur, Balram discusses a revolution by the “brown man”(India) and the “yellow man”(China) against the “white-skinned man” shadowing his story of how he revolted against his fate as a servant.

The film was entertaining and meaningful enough, also with a slight resemblance with ‘Parasite’ and ‘Slumdog Millionaire’. Even though we knew that Balram Halwai managed to escape the chicken coop, the film still managed to hold the viewers captive with the suspense. The ending, in fact, seemed unsatisfying. Just as the characters, emotions, and situations in the film had both contrasting elements, the movie itself is a good watch but not one of the best in the genre.

Basketball is special. The lack of protective gear and condensed size of the playing court allows fans to have the most intimate experience of a team sport that exists. Thanks to the distinct play styles, basketball allows players to develop... END_OF_DOCUMENT_TOKEN_TO_BE_REPLACED

Ping! Sound familiar?  That's the sound I woke up to every day, ever since I got my first mobile phone at thirteen. Of course, technology has come a long way. But at least I did not have to ask a... END_OF_DOCUMENT_TOKEN_TO_BE_REPLACED

Every time my dad and I go on a long drive, we always tend to have serious discussions that range from my career choices to a wrong selection in the Indian cricket team for an important match. On one particular... END_OF_DOCUMENT_TOKEN_TO_BE_REPLACED

“And medicine, law, business, engineering, these are noble pursuits and necessary to sustain life. But poetry, beauty, romance, love: these are what we stay alive for” - Dead Poets Society (1989) When I first watched Dead Poets Society close to... END_OF_DOCUMENT_TOKEN_TO_BE_REPLACED

If you are given a box, and you do not know what it contains, will you open it? If someone tells you that it is empty and asks you not to open it, will you still do... END_OF_DOCUMENT_TOKEN_TO_BE_REPLACED