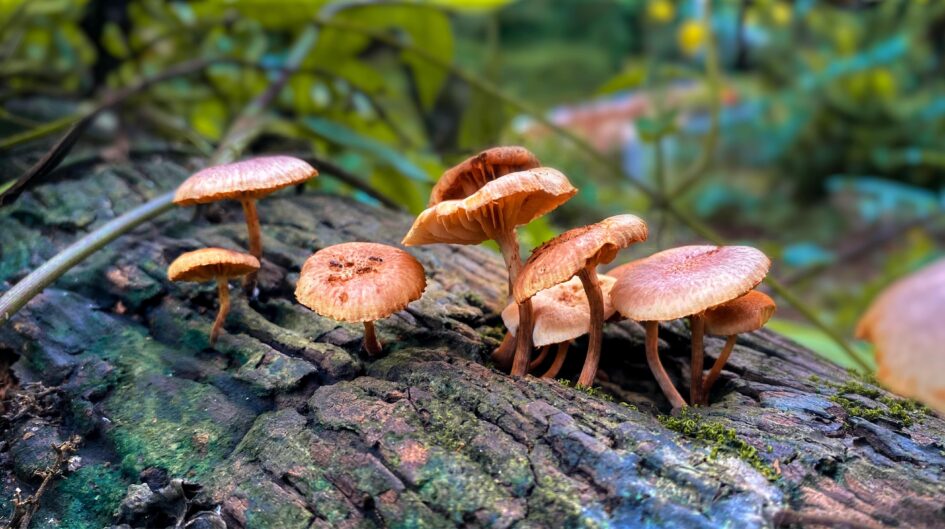 He covers his eyes with a sleep mask, lies on the bed, lights go out, and some calming music comes on.

And soon, it hits him.

He starts seeing metallic particles- like glitter or metallic confetti, very slowly floating in the air.

Then he starts talking out loud.

“Wow, now it is everywhere. It’s right in front of me but on a different plane. It’s getting closer. Everything is rotating counter-clockwise and I’m in the middle of it. It feels like a giant cut-out – three dimensional but not cardboard, of an eagle, a bald eagle. The top part of it has the presence of an eagle’s head, and the rest of the body looks feathery.

There’s this line. I don’t want to compare it to ants.”

While this was happening, he started thinking about childhood memories and going through what had gone wrong with his life. It was just him having a conversation with himself. He was crying in such copious amounts, and in such an uncontrollable way. He felt like his eyes were being pushed inside his head and were on fire, and so much mucus was coming out. It felt like his body was shedding everything he had in him then.

It hit him. There was a moment when he realized that he was done.

After the whole experience, he knew that the anxiety was gone.”

It had been about two years since he had that session. And while he was still going to a therapist, he hasn’t had severe anxiety attacks since; no dry heaving or uncontrollable crying. He felt like he was cured and happier than he ever was before.

Can this be for real? How on earth could one trip cure one’s life-long anxiety and severe depression?

And if this does work, should we all be spending the 2020s ‘tripping balls’?

Today, magic mushrooms ditched their tie-dye to get a lab coat. Because when it comes to magic mushrooms, objects, sounds, colors and even time can all seem very different.

There is an underground and illegal movement where people are getting dosed up with magic mushrooms and claiming that they’re having these amazing, life-altering experiences.

But then, there’s Science.

This whole idea didn’t come out of nowhere. These mushrooms have been around for a long time. Scientists back in the 60s and 70s were experimenting with psychedelics, seeing if they would help people with anxiety and depression. And they were having some luck.

But then came the war on drugs. This kind of research became almost impossible.

Drugs like magic mushrooms were considered dangerous- which is the message that we got about them, for decades. For years, doctors were afraid of magic mushrooms.

A bunch of treatments that we have for depression didn’t work for a lot of people. It seemed frustrating for doctors. But then in 2013, at a conference, someone talked about the potential of using the chemical in magic mushrooms that makes people trip. It’s called psilocybin. It has been said that the chemical was helping some people with depression. And back then, just a couple of years ago, this was very strange.

Trials were conducted. The typical folks of these trials had been living with depression for a very, very long time. They tried many different things. A lot of them had been through several doses of antidepressants and met with many psychiatrists. Most of them never found a solution.

Before getting the pills, the patients do therapy and talk a bit about their intentions. Then the psilocybin is administered ceremonially. And then it’s go-time. The patients end up taking a massive dose of this stuff- around 5g of dried magic mushrooms. These doses are about 2-3 times higher in comparison to what people would usually get for recreational purposes. These heroic doses might give them the best shot at this treatment working.

When people down this much of psilocybin, they respond in all kinds of ways. Some people have very visual experiences while being completely immersed in a whole different world or landscape. And some people have little to no visual experience. It is all emotional or physical. Some feel like the insides of their bodies is revamping.

As trials were being conducted with more and more people, they started to realize that this really might be working. The change that people were having in their lives was surreal. It had been decades since they last felt joy, connection, or love in their life.

At that point, this just wasn’t an experiment. It was changing people’s lives. They ran the numbers a month later. In the limited number of people, it looked pretty great. Not everyone had a visible transformation. But three-quarters of the people said they felt a lot better. And more than half said that their depression was gone.

However, it is not a magic bullet. Some people did not improve or improved for a little while. Later their depression came back. But data suggested that it was an incredibly powerful treatment.

Cut to the present, a widely adopted practice for treating MDD (Major Depressive Disorder) is psychotherapy or antidepressant medication. Anti-depressants are ketamine-like drugs that have a high therapeutic potential. However, there are some drawbacks.

There are some short-term side-effects of using ketamine, such as feeling a numbness, difficulty speaking, or generally feeling strange and bizarre. Ketamine could also be very addictive and may have a high potential for abuse.

To avoid any form of medication abuse, we need alternative treatments to support psychotherapy – enter psilocybin.

Psilocybin has lower addictive properties than ketamine, which would be beneficial as a potential additive for current treatments.

So, would magic mushrooms play a vital role in practices that aim to cure depression in the near future?

Well, well, well. Something interesting has finally caught your attention in this painfully boring and monotonous life. You dash to the most convenient online marketplace to find the materialistic item that fuels your dopamine rush. These platforms help connect buyers... END_OF_DOCUMENT_TOKEN_TO_BE_REPLACED

[Trigger Warning] The following article contains acts of cruelty and violence. Reader discretion is advised. I opened my laptop, exhausted from all the classes at college, (not) ready to log in to another class when I stumbled upon “Monster: The... END_OF_DOCUMENT_TOKEN_TO_BE_REPLACED

Flash, Flash, Flash. Various screens show the face of the actor. A woman crying in the corner while another loves the visual of her crying. The editor looks at all of these different shots and lets out a satisfied... END_OF_DOCUMENT_TOKEN_TO_BE_REPLACED

Each person does see the world in a different way. There is not a single, unifying, objective truth. We're all limited by our perspective. - Siri Hustvedt Perspective. It is a beautiful thing in a way that, all of us... END_OF_DOCUMENT_TOKEN_TO_BE_REPLACED