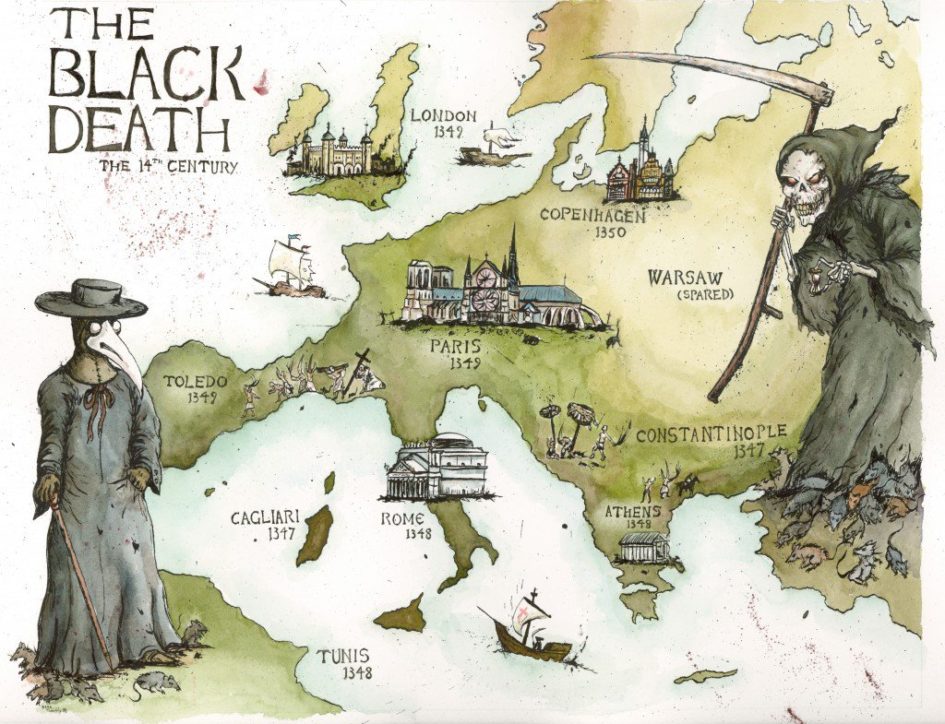 Ring a Ring o’ roses, a child’s rhyming game, has entertained children for many years. The classic rhyming game first appeared in print in 1881. However, reportedly, the origins of this song and dance routine occurred during a grimmer time in history.  Legend has it that the rhyming game found its origins during one of the worst pandemics this world has ever seen: The Black Death

The Black Death was the most horrific natural disaster of Middle Ages. It was a devastating plague that killed millions of people in Europe and Asia. One Italian historian wrote: “This is the end of the world”.

The plague first hit western Europe in 1347, and by 1350 it had killed nearly a third of Europe’s population. Disease ravaged a Mongol army fighting in the Crimea. The desperate Mongols catapulted diseased corpses over the walls of a fortress defended by Italians. When the Italians sailed home to Genoa, they carried the disease with them. From Sicily, the plague spread at an alarming rate. The speed at which it spread and killed, as well as the horror which accompanied the diseased, caused a panic in the Italian population.

The rats travelled on ships from port to port, and as they moved the Black Death spread at terrifying speed. There were rats and fleas in every medieval town and in most houses. Rubbish in the streets and poor sanitation made towns an ideal breeding ground for disease. Many towns lost half their population to the plague, and scores from the villages were abandoned.

The disease was bubonic plague, passed to humans from infected rats through flea bites. The black rat carried the fleas that transmitted the disease. Fleas left the rat, which also died partially from the disease, and moved on to a new host; humans. Once the flea bites a human, infected blood from the rat is introduced to the healthy blood of the human, and the bacteria spreads. Death occurs in less than a week for humans. 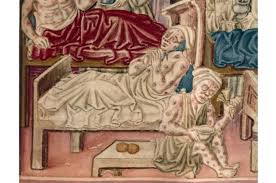 The name “Black Death” came from the black spots that appeared on victims, who also developed swellings in their armpits and groin, and coughed up blood. Many people died the same day they fell ill. No medieval doctor knew why the Black Death struck or how to cure it. To many Christians, it seemed a punishment from God, and some took to the streets, whipping themselves as a penance for the sins of humanity.

Neither town governments nor local doctors could fight the plague. Many people fled, leaving the sick to die. Crosses on doors showed the disease had struck. Carts carried the dead away.

The Black Death raged from China to Scandinavia. As it spread, panic-stricken people fled from the towns. Wherever they went, the plague went with them. … So many people died (at least 25 million, or a third of the people in Europe) that villages were left deserted and fields overgrown.  The Church lost many priests, the only educated men of the time. Half of England’s monks and nuns died, and three archbishops of Canterbury died in one year.

Repeated plague attacks throughout the 14th century left Europe short of people to work and farm the land and pushed up wages. Unrest over wages and taxes led to an uprising in France in 1358 and to the Peasants’ Revolt in England in 1381.Further outbreaks of the Black Death continued until the early 1400s.

The main theme that one can derive from the Black Death is that mortality is ever present, and humanity is fragile. 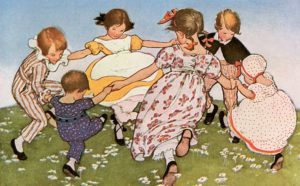 Ring a Ring o’ roses – An early symptom of the plague was a red, circular rash.

A-tishoo! A-tishoo! – Sneezing or coughing was one of the last symptoms before death. In later rhyme versions, “Ashes! Ashes!” replaces this sentence. The bodies of plague victims were usually cremated, so this later adaption still works within the original idea.

We all fall down – This last line states the final result of the plague – death.

“Why do the Yankees always win? The other team can't stop looking at the pinstripes.” The famous quote by Frank William Abagnale Jr., one of the popular con-men specialized in impersonation and forgery, can definitely be taken as the basis... END_OF_DOCUMENT_TOKEN_TO_BE_REPLACED

In a world of change, the only thing constant is the effort to make a difference. While we all desire to be our finest selves, the path to being better is a rocky road. There are some days where we... END_OF_DOCUMENT_TOKEN_TO_BE_REPLACED

Shashi is an amiable, poised, beautiful middle-aged Indian homemaker, and a mother of two, to whom family is both the beginning and period of her world. She may not be very professional but works overtime to fulfill her passion for... END_OF_DOCUMENT_TOKEN_TO_BE_REPLACED

Disclaimer: The facts mentioned in this article may vary with the actual ones. "To conquer oneself is a greater victory than to conquer thousands in a battle." – Dalai Lama The second world war reached its final stage in 1945,... END_OF_DOCUMENT_TOKEN_TO_BE_REPLACED

Trigger Warning: The following content contains a description of abuse and murder which is potentially disturbing. Readers’ discretion is advised.   Did you know that Adolf Hitler was alleged to have paranoid schizophrenia? Many Psychoanalysts pronounced that he had mental... END_OF_DOCUMENT_TOKEN_TO_BE_REPLACED