Ram, till death do us apart 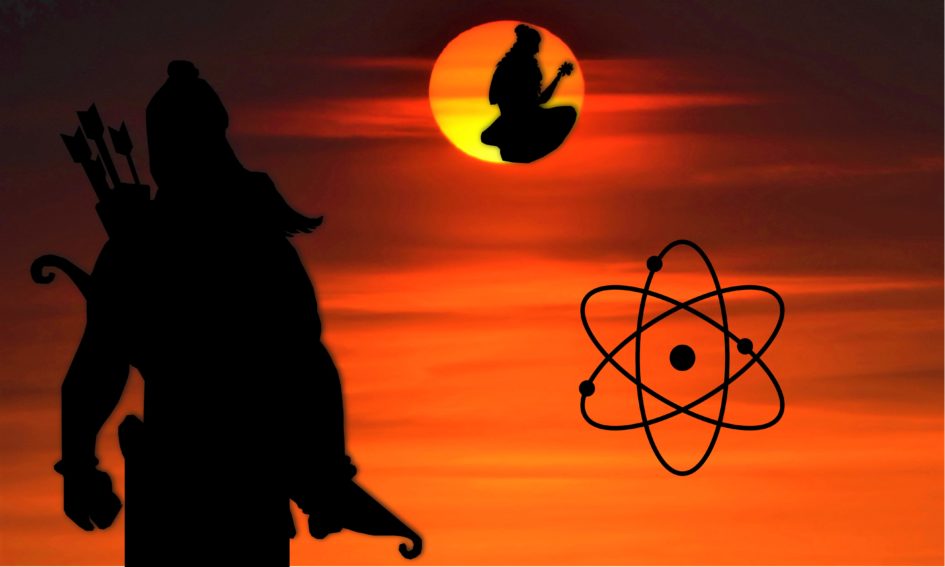 “And that’s why we named you Lav”, Ram said as he kissed his son’s forehead while adjusting his bedsheet. The clock was ticking ten and Lav was slowly falling asleep after his bedtime story. Ram tucked him and his favourite doll, Kush.

Made of rugged cloth and stuffed wool, the narrow eyes of this toy were the only reason Lav loved it. For one, they were like his. And also, everyone used to say, “Lav has his mother’s eyes”. ‘Kush’ was the only memory he had of his mother except for her small gold-framed portrait hung outside, before she left the home and never returned. “Goodnight precious”, Ram whispered to his six-year-old as he switched off the lights before leaving the room.

Ram, an IT engineer by profession lived with his only son in a small house in a city that never slept. It was the month of Ramadan and Haleem stalls had lined up on either side of the roads of Hyderabad. But neither the seven spices of Biryani nor the six fruits of Kheer-kurma drove Ram towards them. For a simple person like Ram, born and brought up in this lavish city, he was never fond of the many sights and scenes. Yet, even though he rarely spoke, many loved his company.

It was a Saturday night and Ram, as usual, had refused to go for a drink and had headed straight to his home driving his Maruti. Reading the same bedtime story and tucking Lav in bed again, he went to his room and hung up the worn-out dart-board. Only his younger brothers knew how good his aim was.

“Bull’s eye.”, he whispered as the third pin had marked its target at point zero. He crashed on to the bean bag and picked up the lemon juice from the coaster. “You never liked me for staying up late, did you?”, Ram said looking at the framed picture of his wife. “Stop me from staying up late, Sita”, Ram’s voice choked, “Stop me. Say something one more time.” A tear escaped his eye. The glass of juice trembled in his hands.

“I have tucked Lav in bed and kissed him goodnight. I have paid the bills and stacked the fridge. Just like you had said. You used to kiss me and say how much you loved me. And then we used to fight for who loved whom more, yet now, you stay there, in that frame, silent as ever.” Ram sobbed uncontrollably but covered his mouth hard so Lav couldn’t hear him from across the room.

This turmoil in their lives had started seven years ago when Sita was admitted to a city hospital where she had complained of severe headache. After a thorough CT scan, it was discovered that she had a tumour in the back of her brain. It had crawled up to the cerebellum thereby hindering her ability to maintain balance.

Her doctors called the tumour, Dashanan, the one with the ten faces, as it had latched itself with ten globular heads. And the only way to operate it was to start from the centre and reach each ‘head’.

Ram had worked double shifts and liquidized most of his assets to meet the expenses for the surgery. He struggled to bridge the money gap while working as the IT head at the Rocks Mineral Incorporation.

Finally, with the best doctors on board and Ram’s love, a one in the millionth case was successful, but that cost Sita the ability to walk. Yet that didn’t hinder her or Ram’s spirit to march ahead in life. The prosthetics worked like a charm and the next year Sita was expecting too.

While joy had surfaced for some time another thunderbolt hit their lives. Few days after her delivery, Sita sensed constant pain in her lower abdomen. It felt like the earth was pulling her down.

As much as she wished for her husband to stay with her day and night, the householder Ram always had to sprint like a horse between work and house. A golden pendant of Sita seemed to be the only source of his energy to perform all the tasks.

Days turned nights and months turned years but Sita was still bedridden. From a corner of her eye, she could see Ram playing with the five-year-old Lav. “Ram”, she called her love, “Ram, come here.” Despite Lav’s endless giggles, Ram could hear her faint voice. He rushed to her bedside where she lied.

“There can be nothing merrier than listening to your voices, Ram. Especially in these last moments of-”

“Hush!” Ram placed his finger on her lips. But she slowly took it down.

“Even in the hardest of times, we have been together. As my life ebbs away, I ask of you to–”, Sita coughed, “—always remember our wedding vows.”

“Till death do us apart, Swamy”, My Lord, Sita had said looking deep into the navy-blue eyes of Ram at the time of their wedding.

“Or never, Devi”, My Goddess, Ram replied, recollecting his vow while kissing the back of her palm.

Sita smiled back at him, now barely able to keep her eyes open. Ram could feel her pulse slowing down. A faint “Ram” escaped from her lips until she laid there motionless.

“Sita!” Ram shook her. “Sita, come back!”, Ram shouted with tears rolling down his cheek. Unaware to both of them, Lav stood behind the door. A young bright child saw his father weeping by his mother’s side. Within a split second, he ran to hug his father not knowing what had happened around. Ram controlled himself and ensured that Lav didn’t see Sita. His mother had always returned his hug; seeing her arms not pulling him harder to her would’ve broken his heart. “Sita”, Ram sobbed.

Today, after one year, Ram sits in front of Sita’s frame while clenching the golden pendant hard.

Love is simple. It isn’t about the mammoth weddings or precious rings. It isn’t only for the Kings or Queens. Love is the dry soil awaiting the downpour of the rains. Love is the mountain wanting to touch the clouds. It was love which bounded Ram of Ayodhya with the Sita of Mithila, and it was love which held Engineer Ram with the Sita of Hyderabad. And it will be love which will bind the Ram or Sita of your life with you.

“Till death do us apart, Swamy”

Inspired from Chitra Banerjee Divakaruni’s ‘The Forest of Enchantments’, a song of love, a lover and a loved.

To most, the color purple is just like another color and holds no special significance, other than to be one's favorite color. It is a simple color resulting in a beautiful blend of red and blue colors. But in reality,... END_OF_DOCUMENT_TOKEN_TO_BE_REPLACED

Since the primitive days of human existence, we have come quite far as a civilization. While this advancement can be attributed to numerous factors, the ability to socialize takes the cake. This remarkable ability to express our feelings, work together,... END_OF_DOCUMENT_TOKEN_TO_BE_REPLACED

Disclaimer: The facts mentioned in this article may vary with the actual ones. "To conquer oneself is a greater victory than to conquer thousands in a battle." – Dalai Lama The second world war reached its final stage in 1945,... END_OF_DOCUMENT_TOKEN_TO_BE_REPLACED

“Why do the Yankees always win? The other team can't stop looking at the pinstripes.” The famous quote by Frank William Abagnale Jr., one of the popular con-men specialized in impersonation and forgery, can definitely be taken as the basis... END_OF_DOCUMENT_TOKEN_TO_BE_REPLACED