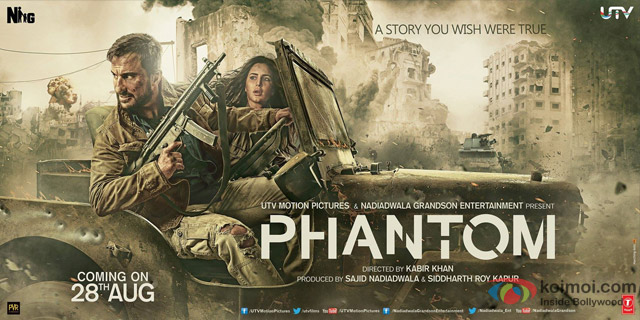 Set in the backdrop of the 26/11 Mumbai terror attacks, an attack which left the nation crippled and helpless in the hands of barbarians like David Headley, Zaki ur Rehman Lakhvi, Ajmal Kasab, Ansari – Phantom not only manages to retain the sentiment of the 26/11 carnage but also adds a cinematic flavor to the incident.  Phantom has a very unlikely protagonist Saif Ali Khan who has previously worked mostly in the rom-com genre and hence its a delight to watch him essay a role like this.  Phantom stands out because of the boldness of the script, concept and the underlying idea being insinuated to the Indian government.

Daniyal Khan (Saif Ali Khan) is an ex- Indian army fighter who lives in the eerie solitude of snowy mountains – dead inside and to the world. Possessing the skill of an Indian army fighter and the lonesomeness of a ghost, Daniyal Khan is the perfect candidate to undertake a covert mission planned by the RAW to kill the people involved in the 26/11 Mumbai terror attacks.  Daniyal Khan executes the assailants one by one without exposing himself and giving an impression to the world that it was an accidental death. I think I can safely call him the “Globe-trotting classic killer machine”. Eventually and predictably he succeeds in his mission but there is a catch here- a catch to kill the monotony of the cliche. Watch the movie to find it.

The script can be rendered as a high tension wire with slight variations in intensity here and there.  It is bold, crude and action packed. What stands out the most is that the script uses actual names of the people involved in this brutality! They have also attached the history and involvement of each person compelling our mind to re-visit the timeline and gory splatter of the 26/11 carnage. This movie is an awakening to those filmmakers in the film industry who crouch under the fear of the unknown power impelling them to tame down the intensity of scripts based on gory reality of such incidents. Thousands incidents to name yet there isn’t one movie which mirrors the real incident. Most of the scripts shadows the incident, but do not mirror it.

Coming to the performances, Katrina dilutes the high tension of the movie and decelerates the momentum. I fail to comprehend as to why she is the most sought after actress for such powerful roles? Just because she was outstanding in “Rajneeti“ does not mean she can fit into any intensity- demanding role whatsoever. I saw hints of “Ajab Prem ki Gazab Kahani” in her acting which is certainly a sacrilege for a movie like this. Saif Ali Khan, according to me is versatile. He can carry any role on his shoulder- he need not have the martial skills of Akshay Kumar or the brazen body of Salman Khan. Hence the threat of not being stereotypical. His mastery over his expression and his flawless dialogue delivery complement each other well thus making his screen present felt.

Overall a great movie- certainly a one-time watch. It mirrors the 26/11 attack perfectly and also devises the perfect solution. Sadly, cowardice shall never allow us to implement that solution. The philosophers always have an answer to the critics- “We are not them”.

Spoiler: One realizes Katrina is the actual Phantom of the movie. Remains inconspicuous to the whole world yet very much responsible for the success of the mission.

Many of us might look back at the time we spent in school with nostalgia and fond memories. But most will also agree that it wasn't the happiest of places with long and monitored study hours, heavy bags full of... END_OF_DOCUMENT_TOKEN_TO_BE_REPLACED

“Hand me the gun and don’t move a muscle”, an injured Shankar Narayan whispers to his son, while they take cover under an old Contessa. The little boy does exactly as his father says, his hands trembling, desperately trying to... END_OF_DOCUMENT_TOKEN_TO_BE_REPLACED

The scene opens in a jury room, where a decision is to be taken on the death sentence of a man accused of murder. After voting, each juror explains why they feel the accused is guilty or not guilty. One... END_OF_DOCUMENT_TOKEN_TO_BE_REPLACED