What good can come from reparations? 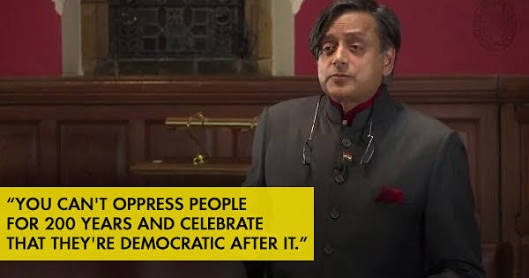 What good can come from reparations?

Shashi Tharoor’s speech in the Oxford Union on the topic “Does Britain Owe Reparations?” has gone viral, been debated and digested and lauded all over the country.

The questions through the entire session of eight very respected speakers were quite thought provoking.

Some valid points in question were-

“How could one possibly quantify the human suffering and loss to the victims of colonization?”

“History has shown us that all cases of reparations by countries have lead to further economic degradation and financial crisis in countries receiving the monetary aid and so reparations would only help autocratic governments enslave their impoverished citizens.”

While these are valid points that have been argued in the process of the debate ,it begs us to question what assistance can any of the colonizing countries provide to those that have been harmed,assuming that monetary and financial aid is completely off the table?

Providing technical help is definitely one thing that could help under-developed countries with regards to the issues they face. We do not expect them to wave the “imaginary” magic wand to wish our problems away,but certain causes that the African Government is grappling with i.e. to provide sufficient drinking water,schools and colleges,electricity and other basic amenities would be a good way of reparations rather than directly handing over large chunks of money to the possibly corrupt governments and making sure that the funds actually reach those whose ancestors were affected by the colonization or at the very least bridge the financial and economic disparity in these countries.

For once do what your rule claimed to do,”make life and civilization better for those colonized”.

But lets not look at the problem as though we are in the dark ages.

Technology can definitely change the way reparations are being made.

Assuming that Britain were to provide at the very least proper technological training along with basic computers it would enable many of the African youth to go forward with learning,growing and to be able to change what they see around them rather than being forced into terrorist factions and losing all semblance of a childhood.

While this may seem hard, as how could this be possible for a nation without the basic facilities and amenities be even able to realise the potential of change that technology can bring, but then we remember that Bill Gates has already been pursuing this cause for more than  a decade.

Although there are many organizations that are volunteering to help with this,I could only imagine the radical shift that a government helping another government would garner a greater sense of good-will while ensuring greater levels of scientific and technological harmony.  While we face greater problems of global warming and over-population ,would it not make more sense to garner as many young and agile minds to mitigate the consequences of years of harm that industrialization has caused to our planet.

Other beautifully crafted arguments along with the ones made by our own Mr.Shashi Tharoor can be found here.

"How do you feel about this achievement? Your book is now one of the fastest-selling books!" asked one of the reporters. "I'm happy for this book's success more than any of my other books. Because this book is not a... END_OF_DOCUMENT_TOKEN_TO_BE_REPLACED

Love is unconditional. It's received and given in many forms, but it's said that the truest of love is when it's without any limitations. A love for caring about others without demanding much for yourself. The love of acceptance and... END_OF_DOCUMENT_TOKEN_TO_BE_REPLACED

Everyone knows Sushant from his popular movie MS Dhoni- the Untold Story. After MS Dhoni, he was seen in the film Chhichhore, which gave a beautiful message "Suicide is not the solution". Many students found the movie relatable. After Chhichhore,... END_OF_DOCUMENT_TOKEN_TO_BE_REPLACED

"Animation is not the art of drawings that move but the art of movements that are drawn” ~Norman Mclaren. Some things in life don’t change, like the craze we have for animation. Right from adoring our childhood shows to never... END_OF_DOCUMENT_TOKEN_TO_BE_REPLACED

To most, the color purple is just like another color and holds no special significance, other than to be one's favorite color. It is a simple color resulting in a beautiful blend of red and blue colors. But in reality,... END_OF_DOCUMENT_TOKEN_TO_BE_REPLACED