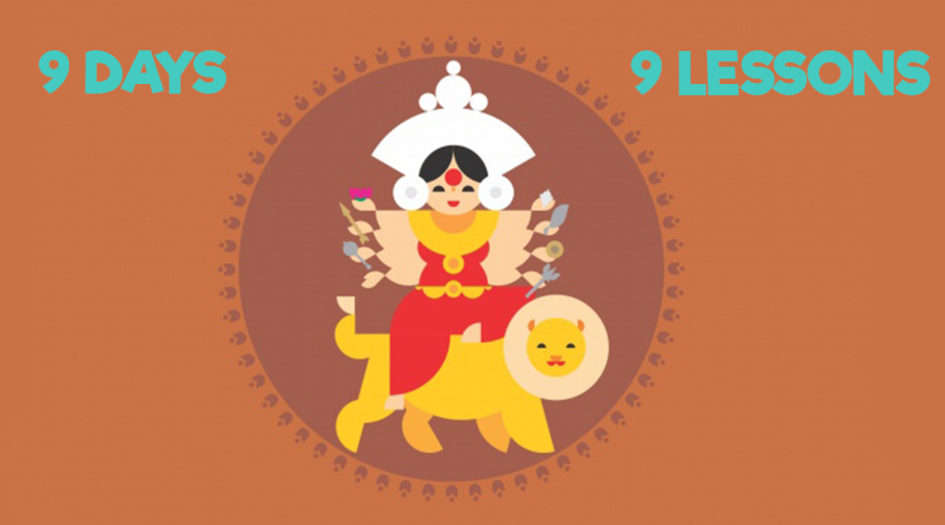 India is a country dominated by religions with Gods seen as the only Higher Power. Throughout the ages, people in India have continued to idolize the source of the entire Universe’s creation as the Primal Feminine Force or Aadi Shakti. Each of the nine days of ‘Navratri’ is associated with one of the innumerable forms of the Supreme Goddess and hence is worshipped with extreme enthusiasm and devotion. However, it is also believed that the celebration of these nine forms has a connection with the different stages of a woman’s life in the society. While there has been a huge difference in the symbolism of an “Ideal woman” along the years, there are a few traits of the deities that are embodied by the modern-day woman as well. 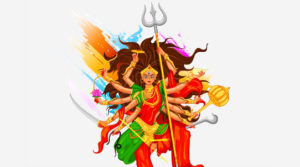 The first manifestation of Durga is Goddess Shailputri- the daughter of the mountain. She is seen as the absolute form of mother nature which is elegant, beautiful and simple. After sacrificing herself to the Agni Devta in her previous life, she reincarnated as Parvati to gain back the love and trust of her husband Shiva. Along with perseverance and kindness, it is also important to have discipline in life.

The second day is dedicated to Goddess Bramhacharini- the unmarried form of Parvati who symbolizes the art of performing hard penance. Her appearance is quiet and absorbed in meditation with a radiance signifying loyalty, wisdom, and tranquillity. She portrays a woman who is a unique blend of both strength and patience which explains that one can be calm and powerful and “not submissive”, all at once.

On the third day of Navratri, Goddess Chandraghanta- one who has a half-moon shaped like a bell is worshipped. The Goddess is held synonymous with all things which are calm, composed and have worldly knowledge. Though she represents peace and serenity, she is also said to have a much darker, malevolent form named Chandi or Chamunda Devi. While it is important to maintain calm and composure, it is also essential to have bravery and show courage at times of injustice.

The fourth day signifies the arrival of the Goddess Kushmanda, one of the supreme forms of Goddess Durga. Ku means “a little”, Ushma means “warmth” or “energy” and Anda means “cosmic egg”. She is considered to be the creator of the universe. She is said to depict the true essence of a woman as the origin of all life and the one sharing unconditional love and care.

The fifth form is of the divine Goddess holding a child, Goddess Skandmata-mother of Skanda(Kartikeya) also known as Panchami. This form is quite similar to the last form which describes a mother’s love and her sacrifices she makes for her children.

Worshipped on the sixth day of the Navratri is the Goddess Katyayani-daughter of sage Katya. This form of Shakti shows the purest aspect of a woman’s lifetime. Goddess Durga here takes the form of a serene and loving daughter who later saves the male Gods from the wrath of the demon Raktabeej by drinking all his blood and hence depicting the frightening side of the Supreme. Goddess Katyayani teaches us that women are in no way inferior to men. 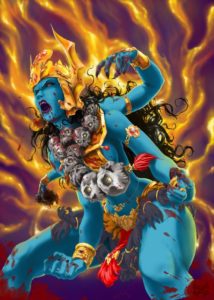 The seventh and one of the most well-known forms of Durga is Goddess Kalratri. She is said to be the most fierce, dark and ferocious one among the nine forms. An unforgiving persona who is ready to ‘fight fire with fire’ and eradicate all evil from the face of Earth. Apart from proving herself to be no less than her male counterparts, she has also progressed by defying the generic looks of a woman and embodying a whole different, fearsome image.

The Durga Asthami or the eighth day of the “Navratri” is dedicated to Goddess Mahagauri. After going through a lot of hardships and penance for her husband(Lord Shiva), she was cleansed by the holy water of the river Ganges, and hence regained her fair complexion. Thus, Maha Gauri is also called as ‘Swetambardhara’. 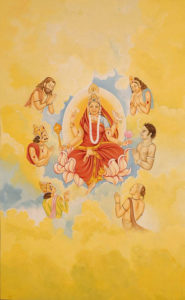 The ninth day is celebrated by worshipping Goddess Siddhidhatri who symbolizes all accomplishments and perfection. It is said to be the final form of a woman after her evolution from a daughter to a devotee to a wife to a mother and the untamed. She is the epitome of the Supreme Feminine. She is worshipped by the gods, the demons and the mankind.

Hinduism depicts a woman in many forms. She may be shown holding an infant in her arms or holding a man’s decapitated head with blood dripping from it, and neither of them is considered inferior to the other. However, times have changed and it would be naïve to assume that religion can single-handedly improve the condition of women in our country. It is important for us to educate ourselves with facts to progress as a country. And what better time to learn a little more about the various faces we have in hand to fight for ourselves than the auspicious festival of Navratri? Educating ourselves with humanity, discipline, the many languages of love and anger, the art of knowing if and when speaking out doesn’t remain just a choice but becomes a need, the necessary choice of making sure we don’t work with any adjustments at the cost of our conscience or as a part of the apparent ‘rules’ of the society, can very easily become the celebration of the Goddesses that we so lovingly wait for every year. Goddess Saraswati, who is worshipped as the Goddess of Knowledge, may not have been a part of the nine Goddesses worshipped in this period, but she plays a very important role in making sure that we know all our strengths and weaknesses to have on hand as and when life throws lemons at us. And hey, when life does throw lemons at us, why make only lemonade when we can have nine different, season-friendly flavours? 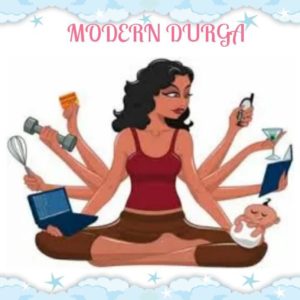 Two things have always fascinated me as a child- words and crosswords. Which word should I say? How do I say it? Can it, in its barely ten letters, hardly three syllables, carry the whole meaning of what I want... END_OF_DOCUMENT_TOKEN_TO_BE_REPLACED

“Hand me the gun and don’t move a muscle”, an injured Shankar Narayan whispers to his son, while they take cover under an old Contessa. The little boy does exactly as his father says, his hands trembling, desperately trying to... END_OF_DOCUMENT_TOKEN_TO_BE_REPLACED

“Propaganda” in present-day English, refers to information or media (especially of biased or misleading nature) that is used to manipulate the audience to further an agenda. If you hear the word propaganda, it immediately alerts you to look out for... END_OF_DOCUMENT_TOKEN_TO_BE_REPLACED

It feels like just a week ago when the internet was bombarded with memes of Will Smith slapping Chris Rock at the 2022 Oscars. Ah, what a moment. The Cannes Film Festival too ended just recently, leaving us waiting for... END_OF_DOCUMENT_TOKEN_TO_BE_REPLACED

As the night grew darker, enveloping an empty street with mystery and fear, it embraced two college students, Matteo and Ace. Drunk and floundering into the dark alley, they hadn't realised how far they had wandered until they came across... END_OF_DOCUMENT_TOKEN_TO_BE_REPLACED