A Fresh and Pleasant “Pellichoopulu” 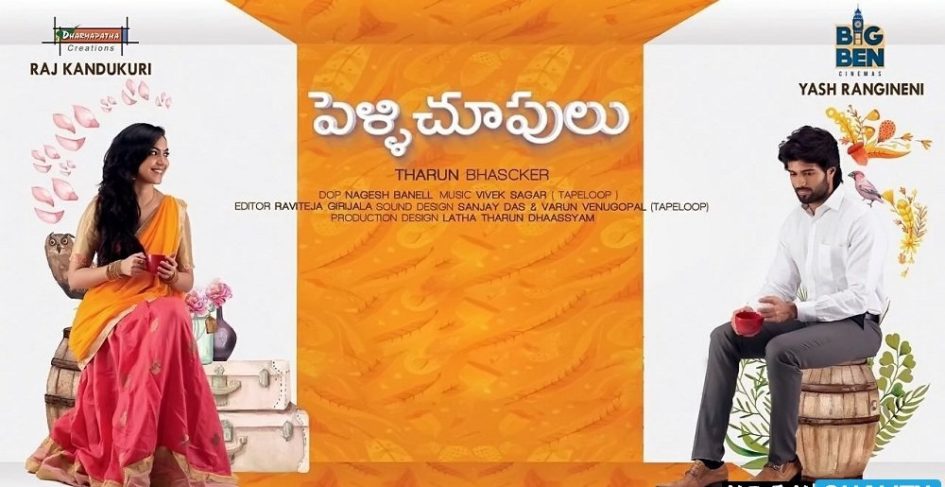 A Fresh and Pleasant "Pellichoopulu"

Each stage of life dishes out something at you and it is your job to handle it. (Philosophical outlook is a by-product of finishing college.) The recent Telugu entertainer Pellichoopulu focuses on the search for a life partner which, as the movie suggests, starts usually after finishing a degree. The catch is that the kid’s parents carry out the search and the boys/girls aren’t as enthusiastic about this. With the addition of some keka comedy rendered in the Telangana slang, the movie plays with this commonly occurring scenario in a fairly harmless way; it does not offend either party’s view. Director Tharun Bhascker has cleverly collaborated with the right people to fuel the making of a successful film within the 1.5 Crore budget range.

The story is as so: Er. (namesake) B.Tech Prashanth (Vijay Deverakonda), a lazy, irresponsible but good-hearted young lad with a dream of becoming a chef, and Chitra (Ritu Varma), an MBA graduate with dreams of starting her own business with a food truck venture, agree to a ‘pelli choopulu’ – an occasion when a bride and groom meet and interact with each other for the first time – after both parents pressurize them to. The two, who were meant to meet other people, meet each other after the addresses get mixed up. A jammed door locks them in the same room for over an hour with a chubby little kid to keep them company. They begin talking and the screenplay oscillates between past and present. Once the door is fixed the families realize their goof up and the two part ways until they decide to nurture Chitra’s food truck business together. Some twists here, some drama there.. but in the end they end up together. The story is not the “Oh my God, I didn’t expect that” type. It does, however, have a aesthetic neatness to it.

The movie has done well even without the presence of superstars on screen; the cast and crew did an excellent job in naturally portraying very probable real life characters. We saw Vijay last in Yevade Subramanyam as Rishi. Since then he has stolen many hearts. Vijay is such a cute yet handsome lad with a smile to die for. *heart skips a beat* His natural, fresh acting is a real treat compared to the commonplace and banal performances we see in masala films.  He is neither too sophisticated nor too naive. He is a perfect blend of both. Ritu (also from Yevade Subramanyam fame) has etched the role well too although her character seemed spoilt and arrogant. She has dominated in the second half and her role has substance. Priyadarshi and Abhay Betiganti who play Prashanth’s friends maintain the lively air with their funny roles while Nandu plays a cliche role  of the macho ex-boyfriend and apart from his looks, there isn’t much interesting about his role.

The music is pleasant to the ears, while still adding to the emotion of the story. The screenplay is well timed in that past and present are simultaneously managed without confusing the audience. The techniques used by the director throughout the duration of the film is laudable; he conveyed messages, humour, and emotion without the unnecessary melodrama that so many movies offer. This is perhaps what draws a larger crowd because everything is natural and relatable.

Looking past the techniques used in film-making, it becomes clear that what keeps the audience seated and not slouching are the hysterically timed dialogues and comedy reactions that Prashanth’s dosthlu Kaushik (Priyadarshi) and Vishnu (Abhay Betiganti) bring to the screen. Delivered in the Telangana slang, these two guys really strike a note with viewers which cannot be overlooked. Hands down, they are hilarious! Of the two, Priyadarshi completely stole the show. The prank video scene is priceless but my favourite dialogue of his is his response to Prashanth’s probable father-in-law’s question about what he is doing. He prevaricates and says that he is writing a book. When asked what the title is he replies “naa saavu nen sasta, neekenduku? – A youthful boy life story ” The theater roared in laughter, I swear!

Tharun Bhascker has some real director talent. He has a bright future ahead of him. His feat with Pellichoopulu is that this movie has showed the older generation that completion of a degree course does not make one eligible to marry or that marriage is the next step. It has brought to light the silent struggle that every person goes through at some point or the other in their twenties. It shouts out to parents “Each of us have our own personal goals and like every goal we need time to achieve it.”  We need more movies of substance like Pellichoopulu which have a message for the crowd. It is high time that motion picture goes back to being an entertaining medium that helps positively shape the public. In my humble opinion, the pointless story-line, violence, punch dialogues (albeit entertaining but still pointless), item songs, double entendres, etc. of hackneyed cinema does no good to our society. Directors and filmmakers need to understand that they have immense power and responsibility to mould mindsets with their creations. The day they begin putting their responsibility over money-making is the day change starts. As an audience, though, we need to implore them to do so. We cannot expect them to make meaningful cinema while we revel in masala movies. Let’s give them reason to try something new..something better.

Basketball is special. The lack of protective gear and condensed size of the playing court allows fans to have the most intimate experience of a team sport that exists. Thanks to the distinct play styles, basketball allows players to develop... END_OF_DOCUMENT_TOKEN_TO_BE_REPLACED

On 24th March 2020 at 8 PM, TV screens across India flickered in unison as the Indian government announced a 21-day nationwide lockdown as a preventive measure for the COVID-19 pandemic. This announcement caused a complete meltdown of economies worldwide.... END_OF_DOCUMENT_TOKEN_TO_BE_REPLACED

Imagine a clean world. It does not have war, poverty, or hunger. Fancy a universe out there, that lives in binary- yin or yang, good or bad, black or white. There is no gray area, no room for error or... END_OF_DOCUMENT_TOKEN_TO_BE_REPLACED

If you are given a box, and you do not know what it contains, will you open it? If someone tells you that it is empty and asks you not to open it, will you still do... END_OF_DOCUMENT_TOKEN_TO_BE_REPLACED