Husband to my wife 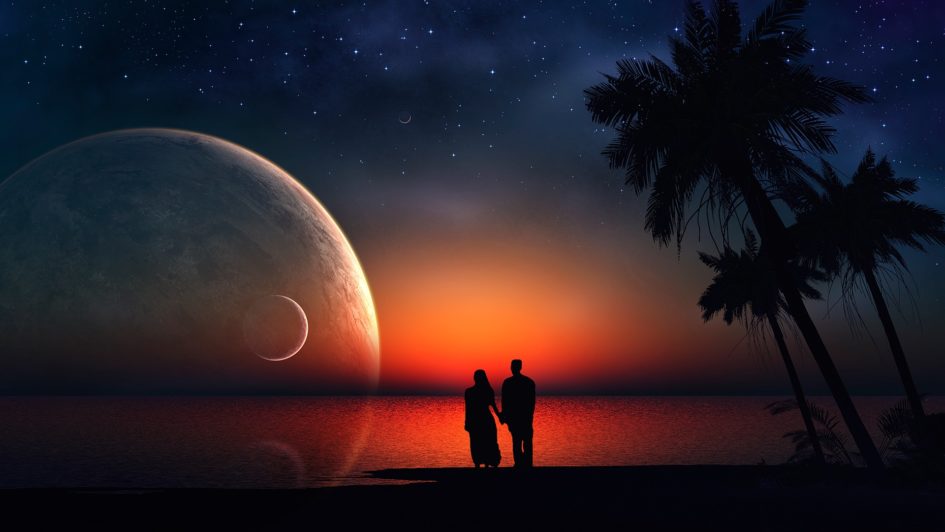 The smell of burnt onions pervaded my nostrils.
“Smitha?” I called out. “Smithaaa!”
“HMMM!” she grunted back angrily from the kitchen. I smiled to myself.
“Smitha!” I called out again. I slowly proceeded to fold the paper I had been reading.
“Smith-“, I stopped midway. She stood in front of me, her hands on her hips, a spatula in her hand, her hair coming out loose, her eyebrows knit together tightly. What an unusual sight.
She spat a few strands of hair from her mouth. “Yes honey?” she said, in a dangerously sweet voice.
I bit my lip to stop myself from laughing out loud.
“I just wanted to know if I could help”, I told her mildly, my eyes feigning innocence.
She narrowed her eyes and exhaled violently. “How very considerate of you! Thanks but no thanks”, she retorted with mock sincerity, as she trudged back to the kitchen.
“Smitha, I can help. You don’t have to do this”, I said, following her into the kitchen.
“Wow”, I interjected and stopped short. The kitchen was a terrific mess.
The kadai with the charred onions now sat in the sink, spewing out sorry fumes. A huge bowl of extremely runny dough stood in a corner. Blotches of flour streaked the floor and the kitchen counter. Vessels were upturned here and there. And in the midst of all the mayhem, there she stood, watching me mutinously, her hands folded across her chest, her eyes daring me to challenge her.
My little one was having a bad day.

“What the hell were you trying to make?” I asked her.
“Food”, she said, sardonically. “I’m going to make the food today”, she said resolutely, more to herself than to me. I could only imagine what lunch would be like if she cooked.
“Why?” was all I could manage, my lips betraying the hint of a smile.
“Why?” she repeated. “Why? You’re asking WHY?” she yelled, her voice an octave higher. She sounded slightly hysterical.
“Smitha, Smitha , calm down. You’re just getting too worked up about this. You don’t have to do any of this”, I replied rubbing her shoulders.
“I can’t match up to your mom’s dutiful daughters-in-law, Arvind. I just cannot”, she wailed loudly, sliding to the floor.
My parents were coming to meet us for the first time after our marriage. They had always lived in the village, and had found no need to come to the city or live here. And Smitha was terrified because she didn’t know how to cook. At all.

Once, being in a very good mood, she had wanted to surprise me by cooking rice and Aloo jeera for the both of us. By the time I came home, I was greeted by a sobbing wife, and a livid, blackened, hissing pressure cooker. I never came to know how she managed to do that. I taught her how to use the rice cooker since it was easier, and she learnt eagerly, wringing her hands and sniffing beside me. Finally, she shoved me out of the kitchen, telling me she’d do it this time. To calm her down, and to celebrate her achievement, we’d gone for an ice cream, and an hour long walk in the park, and had came back home hungry only to realise that she had set the timer, and had done everything perfectly but had forgotten to turn the switch on. Needless to say, we didn’t have any Aloo jeera that night.

Now my parents were coming home, and my wife was losing her head. I looked down at her lovingly, as her hands wrapped around her knees, her head buried in them. I had to make amends. And soon.

My parents came along in the evening. Smitha had finally agreed to getting the  food from outside, after the maid complained loudly about the sooted kadai.

My dad never counted. He was the vague underdog, who had learnt to agree to whatever my mom had to say. My mom was big and boisterous, always complaining. Smitha was petrified of my mother.

As we sat down for dinner, I asked my mom, “Did you know, Smitha made all these for you? She’s been working hard all morning.” I winked at my wife. Smitha looked at me in disbelief and disgust, her mouth opening and closing repeatedly, too shocked for words.
My mom nodded in approval. “You, teach me how to make this dal”, she asked her. “It is excellent, isn’t it?” she asked her husband. And without waiting for his reply, she scooped more dal on to his plate and hers.
“Sure, aunty”, Smitha squeaked.
“Oh, why not? What about today? Or, why not tomorrow? Why don’t you stay? Smitha makes excellent pulao”, I said.
By this time, Smitha was almost emitting copious steam. She stood there quietly, and for once, I was thankful she was not beside me, as I would’ve probably left the table with a huge bruise on my thigh.
“No, no, I haven’t seen my grandson in a year. I will spend the night in your sister’s house only. The next time I come, you will make me that pulao”, my mom ordered.
Dinner was a restless affair for my wife. She flitted between fidgeting nervously on one end, and throwing me glances of deep and pure evil on the other.

After dinner I slid up to her. “I’ll drop them off near the bus stand”, I whispered. “I’ll be back as soon as possible”, I ventured, as she turned away from me, her eyes threatening an outburst. The poor thing.

I kissed the back of her head hastily. Muttering an “I’ll see you later”, I went to drop them off.
When I returned, Smitha was nowhere to be seen in the house. I checked the bathrooms, the bedroom and the kitchen too(God knows why I even bothered to check there), but to my surprise, I found her there. She stood with her back to me,bent over the stove, her dark hair rippling, a shawl draped around her shoulders. She looked like a witch, brewing her potion in a cauldron.

“You haven’t slept yet?” I asked her cautiously, walking up to her. She shook her head violently .
“What are you doing, Smitha?” I asked her.
“I’m cooking. Now shove off”, she muttered angrily.
“But why?” I asked. No reply. I sat myself on the kitchen counter, prepared for entertainment.
“I’m making upma”, she said shortly.
I cringed internally, thinking of the mess we had to clean up after, but said nothing.
She cut up  carrots and tomatoes maniacally, a malicious glint in her eye. I was almost surprised she didn’t poke the knife into me.
“Smitha..” I started, but she cut me off.
“Nah-uh, mister”, she said. “You don’t get a say in this. You can either sit and watch me cook or get out and sleep.”
Finally, she threw in the vegetables and a dash of ghee. Then she poured in water up to the three fourths of the vessel.
“….boil…”, was all I heard as she murmured to herself. “And then the rava.”
She took out the rava. “Smi-” I tried again.
“I said NO”, she yelled.
She measured out the rava, and waited for the water to boil.
“Smitha?” I asked, timidly.
“Arvind, just leave me alone for a while, will you?”
I shut up completely.

She was almost smiling to herself now. Her breathing had mellowed down, her stance more casual than the worked up puffer fish one before.
As the water started boiling, she took in a deep breath, like she was going to plunge into the water herself. I have to admit though, it smelled great.
She chanced a glance at me once, a victorious glint in her eye, as she prepared to add the rava. Any moment now, I expected her to throw her head back and cackle loudly. And probably duck my head into the water.
She rubbed her hands, and slowly, began adding the rava. She stirred the water feverishly as the rava fell in.

I’ll save my wife of her futile escapades. Cut to two minutes later, she was still struggling to stir the mound of what  now looked like a mosaic rock.
“Move! You….useless….lump”, she heaved, as she flailed the ladle viciously. The  upma wouldn’t budge. She was sweating profusely by now, her hair in knots, and was almost flogging the sorry, inedible fiasco.
She stepped back looking at me, defeated, tears pooling up in her eyes.
“That was idli rava”, I said in a low voice.”I tried to tell you, but you wouldn’t listen.” I felt so sorry for her.
She nodded imperceptibly. But I knew she hadn’t understood. She wiped away her tears and exhaled loudly, trying to steer herself to normalcy.
She switched off the stove and heaved a huge sigh.

I hastened to stack everything away. She leaned against the shelves, her hands crossed, looking away. Neither of us said anything. I cleaned the counter, and returned everything to their shelves.
She came forward to throw the upma away.
“Smitha?” I said softly.
“Hmm?” she replied, staring at the upma.
“You know what we should do?” I said, in a low voice.
“What?” she said, turning around to look at me. She looked anxious and desperate . Maybe I would suggest cooking classes? Or I would help her out with learning cooking? Or maybe it wasn’t anything like that and I would tell her I’d had enough? Maybe I’d tell her I didn’t want a wife who wasn’t competent enough?

I took a dramatic pause.
“What?” she asked again, nervously. This time, she took a step towards me.
“The upma”, I said. “We could break it into balls and you could use them as paper weights in your office”, I said seriously.
She tried hard not to. She pursed her lips together, her nose puckered up and her eyes narrowed. Her eyes almost watered again at the effort, but she couldn’t hold it in.
Her loud peals of laughter punctuated the silence, and she thwacked me hard on the head. I whisked the upma away, and joined her too. As she laughed and laughed, I hugged her hard.
“I love you”, I whispered. She laughed some more and hugged me back.

Trigger Warning: The following content contains a description of abuse and murder which is potentially disturbing. Readers’ discretion is advised.   Did you know that Adolf Hitler was alleged to have paranoid schizophrenia? Many Psychoanalysts pronounced that he had mental... END_OF_DOCUMENT_TOKEN_TO_BE_REPLACED

"How do you feel about this achievement? Your book is now one of the fastest-selling books!" asked one of the reporters. "I'm happy for this book's success more than any of my other books. Because this book is not a... END_OF_DOCUMENT_TOKEN_TO_BE_REPLACED

"Animation is not the art of drawings that move but the art of movements that are drawn” ~Norman Mclaren. Some things in life don’t change, like the craze we have for animation. Right from adoring our childhood shows to never... END_OF_DOCUMENT_TOKEN_TO_BE_REPLACED

Everyone knows Sushant from his popular movie MS Dhoni- the Untold Story. After MS Dhoni, he was seen in the film Chhichhore, which gave a beautiful message "Suicide is not the solution". Many students found the movie relatable. After Chhichhore,... END_OF_DOCUMENT_TOKEN_TO_BE_REPLACED

Trigger Warning: The following article contains a portrayal of characters suffering from severe mental illness. Readers' discretion is advised.   Jane was driving her away from the glimmer of light towards the darkness, creeping deeper and deeper, until she was... END_OF_DOCUMENT_TOKEN_TO_BE_REPLACED