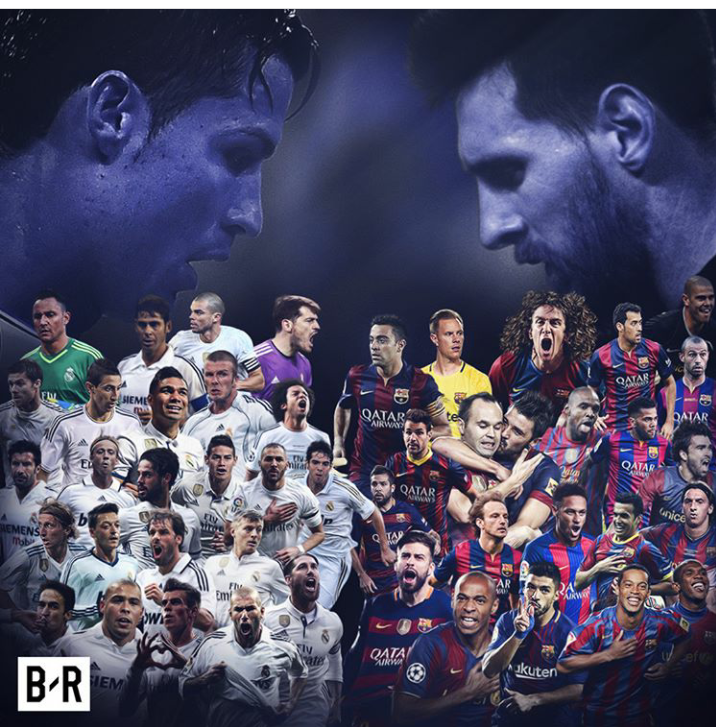 The most awaited match in a football season. The best football clubs in the world facing off
against each other. The best players of all time going face to face. A nation divided into two as
the world watches. The intensity and tension hitting a sky high. A rivalry unmatched since
ages. It’s more than just a game, it’s the EL CLASICO.
The match between REAL MADRID C.F and F.C BARCELONA is known as the El Clasico which
means “the classic” in Spanish. Madrid and Barcelona are the two largest cities in Spain where
football is a religion. The two teams are considered to be the powerhouses of world football
boasting of huge amount of finances and comprising the best players in the world. Forbes rated
Real Madrid and FC Barcelona worth 3.58 and 3.64 billion dollars in 2017. That’s a whopping
amount of money!! It’s one of the most viewed sporting events in the world. Their rivalry
originates from a difference in the political ideology of Madrid and Barcelona which many are
not aware of. The modern day football fans link the rivalry between the two teams to the battle
of supremacy between Lionel Messi and Cristiano Ronaldo, for the title of the best player in the
world.

THE ORIGIN OF RIVALRY:
The rivalry between the two teams is not just limited to sport but is also influenced by the
political history of Spain. Madrid is the capital of Spain and the central government of Spain has
been known for its conservative background. Barcelona is the capital of the state Catalonia,
which contributes the highest amount to Spain’s GDP. The Catalans are known for their
progressive ideology.
Barcelona became an identity of Catalan ideologies in the 1930’s. In 1936, the then President of
Barcelona Josep Sunyol was executed without trial for carrying out political activities against
the then dictator of Spain, Francesco Franco. The Catalans have a unique regional language and
culture, different from the traditional Spanish culture of Madrid. During the dictatorships in
Spain, all regional languages and identities had been imposed a ban. It was during this time that
F.C BARCELONA attained its motto” Mes que un club” which means “More than just a club” and
thus became the heartbeat of Barcelona and Catalonia. Some ultra-fanatical groups or ultras
groups as they are commonly called, representing Real Madrid and Barcelona had become
hooligans. There were violent clashes between the two groups and some factions of the groups
were considered criminal organizations too. Barcelona is still considered as an alternative to

Real Madrid’s conservatism. Madrid fans tend to politically adopt right wing views which are
based on hierarchical ideas whereas Barca supporters are inclined towards left wing views
which propagate social equality. The political misalignment has been evident in the Catalan
independence movement which has grabbed headlines in 2017. Gerard Pique, an important
player of Barcelona has openly supported the independence moment.

MODERN DAY RIVALRY:
The rivalry has been linked to the battle of supremacy between Lionel Messi and Cristiano
Ronaldo who are arguably the greatest players the game has ever seen. They hold mind-
blowing goal scoring records for their respective clubs. Messi won the best player of the year
award a record 5 times, which Ronaldo equalized in 2017. Messi is the leading goal scorer and
has most number of assists in the el clasicos with 25 goals and 14 assists. Ronaldo holds the
record for scoring in 7 consecutive El clasico matches. Messi has scored the most number of
goals when playing against Madrid in Madrid, while Ronaldo has done the same by holding a
record of scoring most number of goals playing Barcelona in Barcelona.

Many footballing legends have left their marks on the game playing for these two great football
clubs. This rivalry is not going down anytime soon, thanks to the rising political tensions in
Spain. At the end of the day this match is a spectacle and a sports lover’s delight because of the
amount of emotions involved and the larger than life picture of the legacy carried by the two
teams. May many more El Clasicos set this world on fire!

“Hand me the gun and don’t move a muscle”, an injured Shankar Narayan whispers to his son, while they take cover under an old Contessa. The little boy does exactly as his father says, his hands trembling, desperately trying to... END_OF_DOCUMENT_TOKEN_TO_BE_REPLACED

Ayrton Senna. A man whose legacy lives on to this day. Most modern-day drivers look up to him. He has won 41 Grand Prix in 162 races, has been on the podium 80 times, and has won the world drivers championship... END_OF_DOCUMENT_TOKEN_TO_BE_REPLACED

Many of us might look back at the time we spent in school with nostalgia and fond memories. But most will also agree that it wasn't the happiest of places with long and monitored study hours, heavy bags full of... END_OF_DOCUMENT_TOKEN_TO_BE_REPLACED