Dandeli : A Journey with Mother Nature 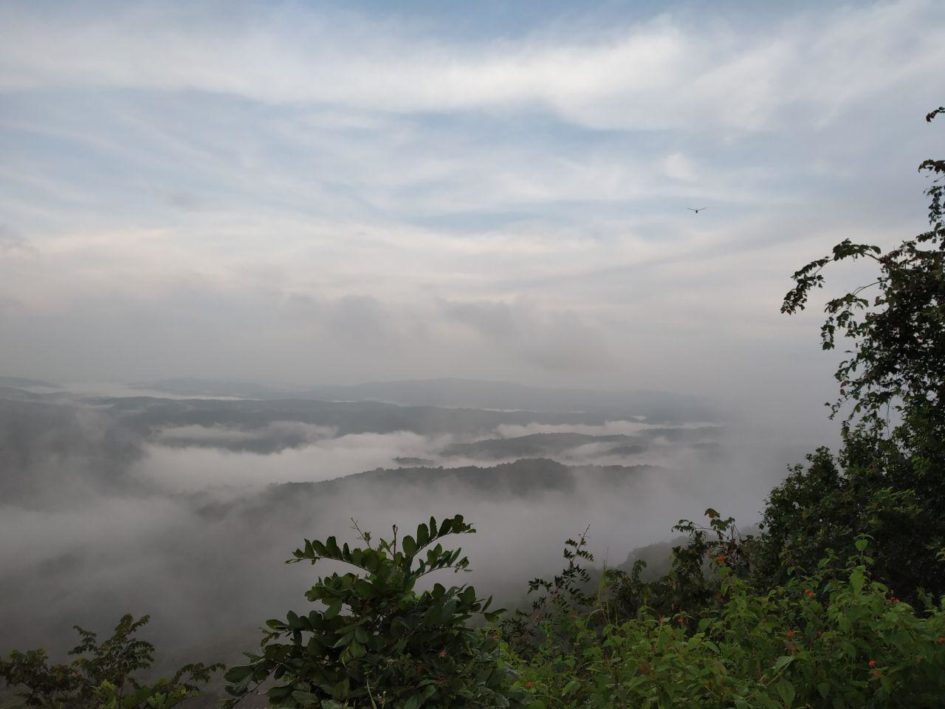 India is a country that receives high rainfalls during the monsoon. Once the season drifts away to the end of September, October’s said to be the perfect time to visit places with a high level of vegetation like the hill stations.  Dandeli, in North Karnataka, is one such place where the beauty lies completely in the natural surroundings. There isn’t much to speak about the city because everything special about it lies within the dense forest surrounding it.

This humongous forest is one of the largest in the country and is a very famous wildlife sanctuary. According to a resident of the city, in the recent animal census, it was found that the forest sheltered around 18 tigers, 22 black panthers, 35 leopards, and many other wild animals.

I visited Dandeli in the second week of October and it seemed to be the best month to experience it. The huge trees were all fresh and green as if they had just bathed, basking under the sunshine. The whole forest surrounding the city looked like a new flower that had just blossomed.

Dandeli is one of those vacation spots perfect for people of any age group. It’s famous for adventure sports such as kayaking, rafting and also some stunning sightseeing spots like the Supa Dam, Syntheri Rocks, and many others. A special mention to the jungle safari which gave me the memories of a lifetime.

On the 11th of this month, we went for the safari at 6 am. It was 2 hrs of traveling and walking through the dense forest. We were informed by the management that it’s a jungle safari and not an animal safari. This meant that the chances of spotting any wild animals were completely luck-based. Due to heavy pouring in August and September, the safari remained closed for two months with just the wild animals roaming around. A tiger was said to be spotted in the safari just a couple of days before we went there.

Adrenaline kicked in when we heard that tigers in the forest roamed very close to the path of the safari vehicles and also that we may spot one hunting. The management also mentioned the sightings of many other animals but I was lost in the thoughts of spotting a tiger, of looking at it from a very close distance in a dense forest. Needless to say, the national animal is likely to deserve such attention.

As we left in the safari vehicles, we could hardly see anything around us. The visibility was as low as the temperature. Just then, a thick layer of fog completely blinded us. As we traveled further and as the sun rose, we could see tall trees of about 20-30ft in height. The driver kept halting at the sight of any deers or peacocks. He spoke about the different types of deers that lived in the forest but all my mind count chant was, ‘ Please, at least one tiger’. “Did you ever pray this sincerely during your exams?”, asked a friend. 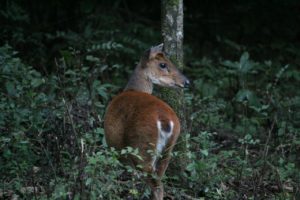 As we moved further into the deep forest, the driver hit the breaks again. But there were no animals seen around us. “Footprints”, he said. All of us peeped out of the vehicle to find a few footprints. They weren’t clear enough so we couldn’t make out the kind of animal it was. The Bear Grylls in me had stepped into action.

From there on, two of us looked at the ground for footprints of tigers and the other two tried to look for animals on either side. This is what traveling with the crew of the Discovery channel must feel like. “Tiger” shouted the driver as he pushed the brakes hard. Even before I could lift my head, my heartbeat grew rapidly and hands turned ice-cold. It was a fanboy moment. As I opened my eyes and tried to look around, he changed his words “Tiger’s footprint”. I was disappointed but didn’t want to curse the poor man. 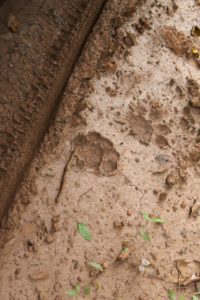 Footprints of a tiger

According to the driver, It was a footprint of a healthy tiger and that had passed through that same path just within the previous hour or two. “The tiger could’ve waited for an hour”, I cried on the inside. We moved further but failed to spot any wild animals. Spotting animals in such dense forest was sheer good luck but the little 7-year-old, fan of tigers, within me couldn’t understand it. I had always wished to spot one of those royal healthy tigers in their natural habitat, unlike the weak ones we spot in a zoo, struggling to stay alive. That’s not the way to treat a king.

The driver stopped before a small hill and asked us to walk to the top of it. Everything in my mind faded away the moment I got to the top of the hill. It was called “The Sky-Point”. The view from there had left me awestruck. Five green hills covered with a layer of thick fog and clouds moving just in front of my eyes. It was, undoubtedly, one of the best views I had ever seen.

Before using the camera to click the pictures, I made sure to take in the breathtakingly beautiful view and clicked enough pictures in my mind. A cold breeze was hitting my skin and as I took deep breaths, that’s probably what inhaling pure oxygen must feel like. The view of clouds slowly moving before you might the best way to be relieved of stress. 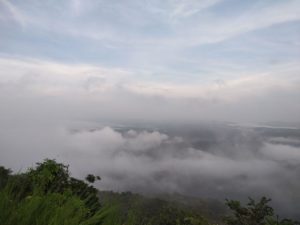 View from the Sky-view point

On the way back, we found a peacock dancing, a giant squirrel and a few herds of deers. This made me completely forget the disappointment of not finding any tigers. 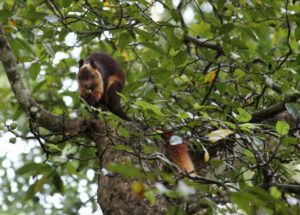 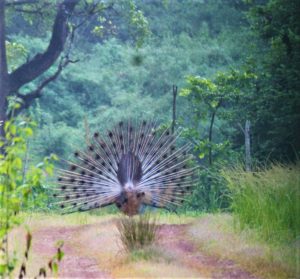 We then left the safari as we had to cover other places in Dandeli. But that wasn’t the end of our safari. We spotted a couple of snakes and a fox on our way to Syntheri Rocks. The driver then said, “Whole of Dandeli is a jungle safari. I’ve seen all the types of wild animals which live in the forest on the roads here.” Saying so he showed us a few pictures of tigers and other animals which were recently spotted closer to the resorts in the city.

This was what distinguished Dandeli from other wildlife sanctuaries. The residents believe that the city and the forest belong to the animals. Shops closer to the forest in Dandeli are closed before 6 p.m. This is not just to be safe from wild animals, but also seen as the debt they pay to the actual owner of the land, Mother Nature. Moreover, they’ve kept the usage of plastic minimal and anyone driving on those roads are cautioned to drive carefully and advised not to honk so that the animals feel calm and safe.

Dandeli, for me, isn’t just a sight-seeing or an adventurous place to visit. It’s a place to experience, live and adore the beauty of Mother Nature.

Well, well, well. Something interesting has finally caught your attention in this painfully boring and monotonous life. You dash to the most convenient online marketplace to find the materialistic item that fuels your dopamine rush. These platforms help connect buyers... END_OF_DOCUMENT_TOKEN_TO_BE_REPLACED

[Trigger Warning] The following reading contains potentially distressing information about violence, brutality and sadistic practices. The reader is advised to use their discretion to continue reading. “For the last time, you don’t have to do this. They will finish the... END_OF_DOCUMENT_TOKEN_TO_BE_REPLACED

The human touch. Such a simple thing, yet one that holds immense power. Almost like a miracle. Wonder why? Read on.  We've been gifted with the five senses, namely: vision, speech, smell, hearing, and the most beautiful of all, touch.... END_OF_DOCUMENT_TOKEN_TO_BE_REPLACED

“How long are you planning to cry and sleep in here?” I asked her, as I raised the blinds in her dark bedroom. Seeing the chocolate wrappers and empty Ramen cups spread across the room, I couldn't help but sigh.... END_OF_DOCUMENT_TOKEN_TO_BE_REPLACED