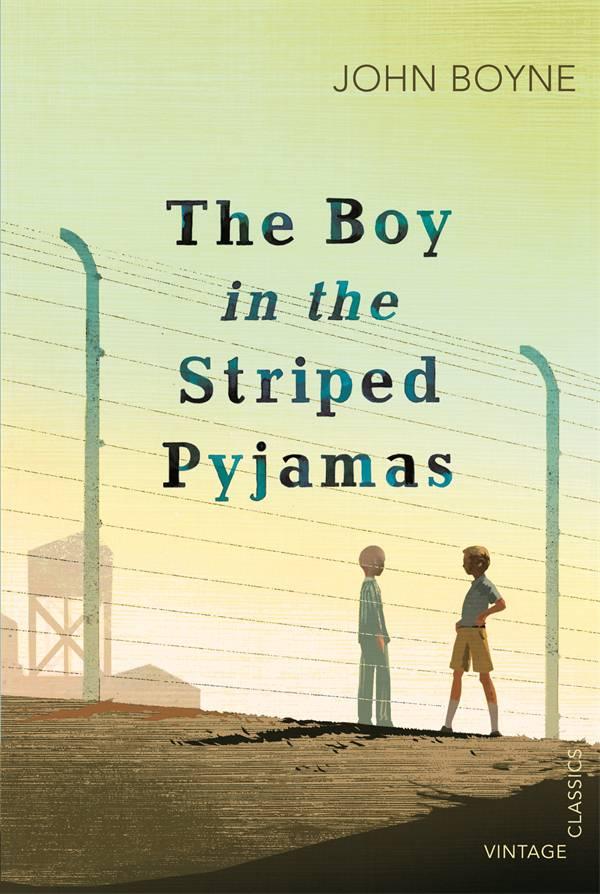 Today I’d like to talk about “The Boy in the Striped Pyjamas” by John Boyne. I’ve been mildly scared of reading this book until recently. A few years ago I watched the movie and expected something childish which was clearly not what I was interested in. But when I watched the movie, I realised it was one of the most tragically beautiful movies I’d ever watched. And then when I got to know that the movie was based on a book, I knew that I had to read it. But it sat on my shelf for over an year and a half because I knew how heartbroken I would be after reading it. It is not very lengthy and also is very easy to read despite its heavy content.

The story is about a nine year old boy named Bruno, who is the son of an officer in army and lives in Germany. Bruno’s father is then promoted to Commandant and Bruno and his family must move to Auschwitz, far away from their comfortable home in Berlin.  Although he knew how important this move is to his father and his family, Bruno is not happy because he would have to leave his best friends. His big sister, Gretel, is no help. She, according to the book, like any other sister in this whole wide world, is always in a world of her own and Bruno often refers her to a “hopeless case”.

From the window of his room in his new home, Auschwitz, he could see a fence. And behind that fence are some of the strangest people Bruno has ever seen. While walking along the fence Bruno meets a boy named Shmuel who is parted from his parents. Although Bruno never understood Shmuel and his side of the world, Bruno becomes friends with him instantly.

This book, while written in third person, is through the eyes of Bruno. Bruno is young and naïve and hence doesn’t understand why there are so many soldiers day and night in his house, why the waiter in his house claims that he was once a doctor, why nobody let’s him cross the fence, and why Shmuel, the only friend he could make in Auschwitz, doesn’t invite him over to play. While a war rages around him, he stays immune to all the cruelty. And what Bruno does with Shmuel, and how their innocence lead to a tragic incident is beautifully written. Though Bruno is portrayed as a very naïve and innocent child, which was pretty unusual for his age, in my opinion he is very inspirational and tries to show us different things differently. This is a book that everyone should read at least once at some point in their lives.

This book has the most tragically wonderful and heart wrenching ending, powerful yet unsettling, which is what made this book a bestseller despite its shallow literature. This is a beautiful book that I would definitely recommend to my friends.

Russia, 2027. Isn't it fascinating how we humans have evolved? Thriving for perfection, we're in a race for continuous development. This century has seen tremendous changes that none of our ancestors would've ever imagined. And as we've evolved, so has... END_OF_DOCUMENT_TOKEN_TO_BE_REPLACED

What is common to a mullet-wielding, neon-donning 1980s American teenager and their Persian contemporary living in obscurity, confined in the clutches of Ayatollah Khomeini's reign? Hint: it starts with 'rock' and ends with 'music'. In 1979, at the heels of... END_OF_DOCUMENT_TOKEN_TO_BE_REPLACED

As I take a stroll in the graveyard observing my funeral, I find a few crying and the other meticulously bored by the doings. Yet it feels so light, death actually took away the pain of my congenital disease. But... END_OF_DOCUMENT_TOKEN_TO_BE_REPLACED

To most, the color purple is just like another color and holds no special significance, other than to be one's favorite color. It is a simple color resulting in a beautiful blend of red and blue colors. But in reality,... END_OF_DOCUMENT_TOKEN_TO_BE_REPLACED

"Animation is not the art of drawings that move but the art of movements that are drawn” ~Norman Mclaren. Some things in life don’t change, like the craze we have for animation. Right from adoring our childhood shows to never... END_OF_DOCUMENT_TOKEN_TO_BE_REPLACED