Is Hyderabad the brain drain capital of India? 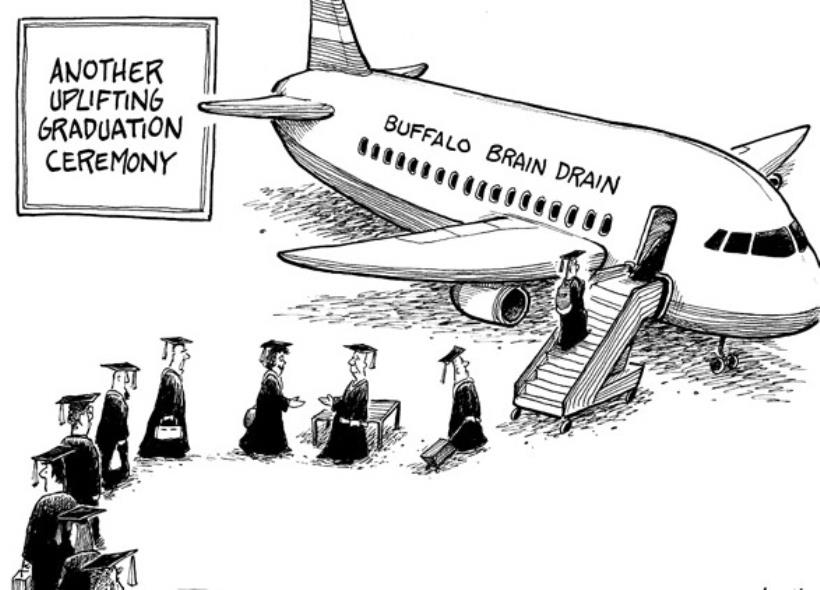 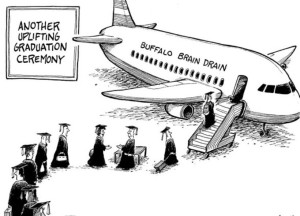 Around this time last year, nearly 135,000 people from India have gone to USA under the F1 visa. Out of which a staggering majority of students are from Hyderabad constituting roughly one fourth of the total and overtaking nearly all the major cities which are in fact more larger and some even have thrice the population of Hyderabad. Out of them the majority i.e, 79 percent have opted STEM (science, technology, engineering, and mathematics) branches and 65 percent or about 90,000 of them were studying engineering, computer science, and information technology that may not seem like much but the total number of engineers India is pumping stands at nearly 750,000 each year and a large number of these students come from both the Telugu speaking states. Just by looking at the plain number of colleges each of this state hosts and majority of which are located in and around Hyderabad, one can comprehend the national figures. The number of students graduating each year is growing manifold and this year Hyderabad is expected to send almost half the total number to USA for higher education.

I write this article not to state some facts or crunch some numbers, but to my utter dismay almost half of my friends have left for US and are not likely to return. It’s a scheme in itself post graduation, dream job, pay taxes and probably end up as  a citizen of that country and this is not the case with my batch or my generation. Because of my acquaintanceship with many seniors, I’ve understood where this trend was inherited from. This was of great concern to me not just because my friends are leaving but also because almost all of them, by the virtue of Bachelors degree if not by the definition , are engineers.

Since the number of people in India who hold degrees, not just engineering but all types of degrees combined, is just 7 percent of 1.25 billion and I hope you can make out the numbers yourself, just a minuscule percentage of them hold STEM degrees which I have referred earlier and that’s the cause of my concern.   I am not saying that all of them have to stay back in India and settle for a lesser pay and an average lifestyle. But, when you see that a vast number of talented individuals who could have otherwise been of great help in building the nation and taking it to greater heights, it breaks my heart to see them all go. I don’t blame my friends and other fellow graduates to have left the country. But, somewhere as a system and as an entity, we’ve failed to create an opportunity and a plausible environment for great minds to stay.

I have my own school of thought and in my personal opinion, the following might be few reasons why this has all come to pass, and it’s up to you to give it a thought:

1) Lack of Opportunity
It can be either higher studies within the country which aren’t recognized globally or it can be jobs which aren’t as challenging(given the pay scale) as the ones abroad.

2) Biased perspective towards those living abroad
We see lot of our American relatives being given a higher social status for boasting about luxurious lifestyle by the Indian counterparts.

3) Quality of Education
The quality of education is alarming in this country especially in the higher education sector. The competition being too high . Even though you manage to get into the best university, it doesn’t stand a chance against American universities in terms of International Ranking or amenities. The best of our universities ranks somewhere between 300-400 and US of A boasts more than half of top 10 colleges globally.

4) Choice of Lifestyle
Our cities are filled with smog and we are home to half of the worlds most polluted cities. Our cities have failed miserably  to contain huge population when compared to American cities. They aren’t that great compared to European cities like Berlin or Paris but are still way better than their Indian counterparts and it’s not just about the cities but the population density in US might seem like boon to many and there are various other features of American consumerist lifestyle which impresses or i must say fancies a lot of Indians.

But, have we failed altogether ?
I don’t think so. There’s still hope. Things are getting better in this country. The pace might be slow but someday we’ll eventually catch up with the superpower if not in military strength or economic strength but may be in other factors. At least, we are better than the superpower in one front that is the human resource capital and are on a race to become the most populated within a decade. If utilized properly, this can do wonders to our country. But being realistic even though we are 1.25 billion, strong and growing, things can’t be achieved if we don’t put those numbers to good use.
We need to bring about a huge reform in this country, in terms of education and career opportunities after all the US might not be at the same melting point as it used to be. I say this considering our neighbor, China which has already overtaken US in terms of GDP-PPP(Parity Purchase Power).

P.S. All images have been retrieved from Google Search Engine.

As the year 2011 rolled in the world population hit 7 billion. Leonardo DiCaprio finally won a well deserved Oscar and for the first time in history, a man married a software. Here is a list of 19 events that... END_OF_DOCUMENT_TOKEN_TO_BE_REPLACED

“Where you gonna run?” the voice was harsh. I let out a painful cry as he grabbed my wrists and pinned them together in a tight grip. I could feel my heart throbbing inside my chest as my breathing became... END_OF_DOCUMENT_TOKEN_TO_BE_REPLACED

Welcome to the new age. Thank you for choosing to be a part of the world of social media. This a free world, and all the inhabitants have the right to assume any name, real or fake. Feel free to... END_OF_DOCUMENT_TOKEN_TO_BE_REPLACED

*Research and studies have shown us that time fly faster when we are learning something new. .As we take a step back and think, we notice that as we grow older the time around us starts moving faster than ever.... END_OF_DOCUMENT_TOKEN_TO_BE_REPLACED

A strong message-oriented story closely related to intense real-life incidents is something we’ve come to expect from Meghna Gulzar’s movies from recent years. And here she’s with yet another bold attempt ‘Chhapaak’. The Deepika Padukone – starrer released on the... END_OF_DOCUMENT_TOKEN_TO_BE_REPLACED