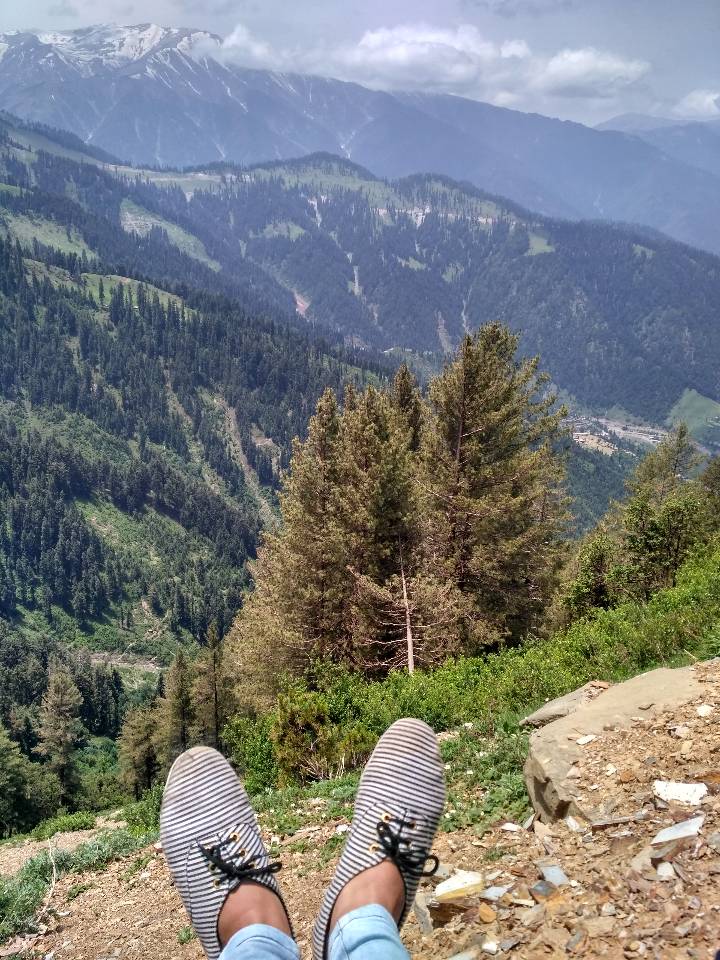 I prefer the road less taken.

This summer I was lucky enough, to visit a remote place called “Bhaderwah” located on the foothills of Himalayan Mountains in Jammu and Kashmir. If risk, daredevilry and adventure is what you seek, pack your bags for Bhaderwah.

The journey isn’t an easy one. With the only means of transport being the roads, the route to the destination is a long one, trailing a series of rocky mountains. The Ghats are steep, and the tracks, narrow. Sour weather – the precipitation and winds – can render routes that are difficult to scale without slipping at best, and impossible in case of landslides. Bags packed, shoelaces tied, we began our journey, once the weather was favourable – with heavy rains paving way for a clear sky (I wish it had snowed). Looking far down the steep side, a seemingly thin river flowed, resembling a vein. Ahead lay a narrow road that seemed impossible to walk on. After much hesitation, my feet proved me wrong, my heart skipping a beat every now and then, until treading whisker-thin pathways became a regularity.

When hope lay scarce, small talk within the company of fellow trekkers and the view of the grand ranges rejuvenated our determination and persistence to reach our goal.

At the end of the day, reminiscing experiences such as these provided great satisfaction. We eventually reached our destination. A stretch of greenery in all direction, with horses grazing peacefully. How I wish I were able to ride one of them.

The Himalayan range was visible from far away,the clouds,the chilly breeze and that green land I was camping on took all my worries away. To my surprise there were places over the mountains patched with ice and I am immensely happy for having at least touched real snow for the first time and for having spent few minutes in a small snow cave. All I wondered was, why isn’t this place a popular tourist spot yet. I sat there on one of the high mountains, watching the beautiful scenario, phones dead, no worries, nobody to be answerable to, nothing to think about with a big smile on my face. I was in a different world. I clicked few pictures and didn’t feel like clicking anymore, for the first time living in the moment made sense, for I had found peace. It was not just about the place,it was more about how that place made me feel. Nothing mattered. It was as though, time had frozen. While leaving I wasn’t thinking how much I would miss this place, I was afraid to get back to my ordinary world where every single thing was so different.

I was sipping coffee, after we had come back to the city. While conversing with few travellers from Banaras, they told me they made a mistake of taking up Bhaderwah as their to-visit place when asked why they said ,“raasta he itna kharab tha upar pata nahi kaisa hoga – no maintenance nothing – we came back right away “. I took a big sip burning my tongue, I simply nodded. As it is said, “It is all about perception.“

Faith has always been considered as one of the most inherently pure and pious things, across any and every religion and every school of a belief system based on the concept of God. That is probably because every single one... END_OF_DOCUMENT_TOKEN_TO_BE_REPLACED

As the night grew darker, enveloping an empty street with mystery and fear, it embraced two college students, Matteo and Ace. Drunk and floundering into the dark alley, they hadn't realised how far they had wandered until they came across... END_OF_DOCUMENT_TOKEN_TO_BE_REPLACED

Ayrton Senna. A man whose legacy lives on to this day. Most modern-day drivers look up to him. He has won 41 Grand Prix in 162 races, has been on the podium 80 times, and has won the world drivers championship... END_OF_DOCUMENT_TOKEN_TO_BE_REPLACED

“Propaganda” in present-day English, refers to information or media (especially of biased or misleading nature) that is used to manipulate the audience to further an agenda. If you hear the word propaganda, it immediately alerts you to look out for... END_OF_DOCUMENT_TOKEN_TO_BE_REPLACED

It feels like just a week ago when the internet was bombarded with memes of Will Smith slapping Chris Rock at the 2022 Oscars. Ah, what a moment. The Cannes Film Festival too ended just recently, leaving us waiting for... END_OF_DOCUMENT_TOKEN_TO_BE_REPLACED