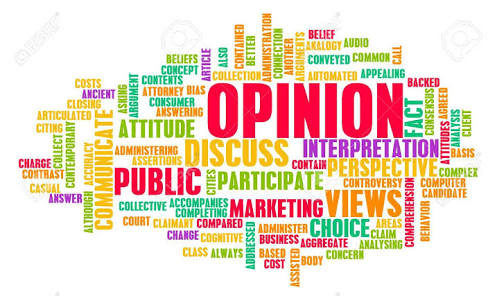 Is everyone entitled to their own opinion? Many a time, when someone speaks about their opinions, they tend to have a misconception about the difference between opinions and facts.

Opinions. What are opinions? Quoting the Oxford dictionary, ‘an opinion is a judgement or a speculation of a person or a thing with respect to its character.’ An opinion is classified as valid only if it is supported by facts.

“Opinions matter”. I’m sure we’ve all heard and used this phrase at least once in our lives.  But how many of us actually mean it? Do we really care about every single person’s opinion? Well, some do. And some don’t. But as much as we’d all like to pretend, deep down we still stress over that one negative opinion about us. Is it okay for that person to have such a major effect on our lives? In a country where freedom of speech is a fundamental right, people still aren’t completely free to express their expressions in it’s true, raw form.

For instance, the issue of intolerance in our country is considered as a challenge which has further lead to quite a few debates on it, both coherent and muddled. On the outside, everyone  seems to agree that people are free to speak their minds. But why is it that as soon as a person expresses their opinion about a sensitive matter, they are branded as anti-nationals? In this day and age, people can be entitled to their own opinion even if it’s politically incorrect. But instead, they are mostly judged and silenced in one way or the other. It’s time we realise that silencing voices and opinions doesn’t kill the motive or idea.

Quoting Yevtushenko- "When truth is replaced by silence, the silence is a lie." This is not completely incorrigible either. There’s a ray of sunshine too, as things are steadily changing now.

How free are we to freely speak?

Let’s just consider a situation where you are passionate about something. So much so, that you cannot hear a word against it. But one of your friends strongly disagrees and says it’s dumb. You can’t just go berserk and tear their heads off. At this moment, you are supposed to understand that this is their opinion and that they don't hold a grudge against you. Sure, you might get self conscious but you need to understand that everyone is entitled to their own opinion.

In a reversed scenario, if your friend/colleague has something they are passionate about, but you don’t empathize with them . How do you convey your opinion in such a way that it’s both honest and also“subtle”?  You should put yourselves in their shoes and realize that it’s something they go bonkers about, and you shouldn’t be inconsiderate of their feelings. But at the same time you shouldn’t be lying or trying to get out of that situation. You should give your opinion as gently as possible in such a way that your intentions are conveyed and at the same time, you don’t hurt their feelings. Also, perfect tolerance isn’t likely to exist. If there is tolerance, there has to be intolerance too. It’s all about maintaining the balance.

“Just say what you mean but don’t be mean.”

Lastly, to all the social media junkies out there, it’s time we use the #NOFilter in real life. People should understand the importance of being open with their opinions but at the same time be considerate about other's too. But again, this is just my opinion...

Everyone knows Sushant from his popular movie MS Dhoni- the Untold Story. After MS Dhoni, he was seen in the film Chhichhore, which gave a beautiful message "Suicide is not the solution". Many students found the movie relatable. After Chhichhore,... END_OF_DOCUMENT_TOKEN_TO_BE_REPLACED

What is common to a mullet-wielding, neon-donning 1980s American teenager and their Persian contemporary living in obscurity, confined in the clutches of Ayatollah Khomeini's reign? Hint: it starts with 'rock' and ends with 'music'. In 1979, at the heels of... END_OF_DOCUMENT_TOKEN_TO_BE_REPLACED

2nd February 2000 Dear Diary, Ugh! Waking up early every single day to attend school is so annoying. I wish we didn’t have school and exams so that I can enjoy myself at home all day long. But that can’t... END_OF_DOCUMENT_TOKEN_TO_BE_REPLACED

Artists across the globe have not been credited enough for their work. These artists keep us entertained in our difficult times besides facing immense competition, worries of a short-lived career, declining engagement, and providing quality and original content to us... END_OF_DOCUMENT_TOKEN_TO_BE_REPLACED

Russia, 2027. Isn't it fascinating how we humans have evolved? Thriving for perfection, we're in a race for continuous development. This century has seen tremendous changes that none of our ancestors would've ever imagined. And as we've evolved, so has... END_OF_DOCUMENT_TOKEN_TO_BE_REPLACED