Celebrating Festivals – What has changed? 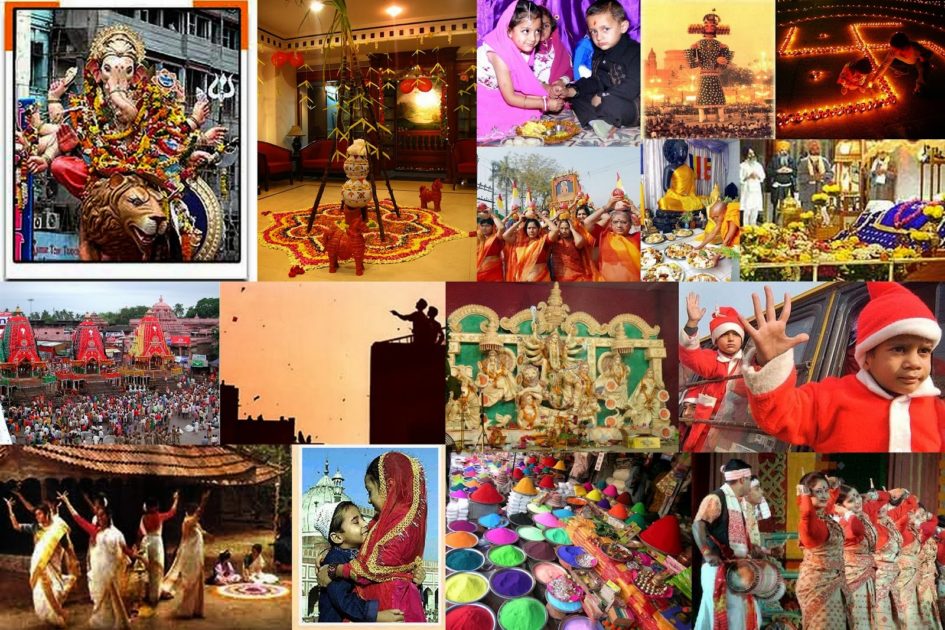 Celebrating Festivals - What has Changed?

In  Indian culture, there was a time when there used to be a festival every day of the year – 365 festivals in a year – because a festival is a tool to bring life to a state of exuberance and enthusiasm. That was the significance and importance of festivals. Festivals were different and differently celebrated across all the regions, depending upon that region’s geographical and climatic conditions. But, the time has changed and so has the way of celebrating festivals.

The festival of Ganesh Chaturthi that just went by is one such festival, which was initially started as one grand family affair. Historical records reveal that Ganesh Chaturthi celebrations were initiated in Maharashtra by Chatrapati Shivaji Maharaja, the great Maratha ruler, to promote culture and nationalism. After the end of Peshwa rule, Ganesh Chaturthi remained a family affair in Maharashtra from the period of 1818 to 1892. Bal Gangadhar Tilak, an Indian nationalist, social reformer and freedom fighter, brought back the tradition of Ganesh Chaturthi in around 1857 and reshaped the annual Ganesh festival from private family celebrations into a grand public event. It was a meeting ground for people from all castes and communities at a time when the British discouraged social and political gatherings to control the population.
The festival of Dussehra marks the victory of Durga over the demon Mahishasura. Since the harvest season begins in India and Nepal at this time, the Durga is invoked by religious rituals to begin the harvest season and renew the fertility of the soil. Many Hindus observe the festival with social gatherings and food offerings to the gods at home and in temples throughout India and Nepal.
There many small and big folk tales related to the celebration of Navaratri and Dussehra.
In our state of Telangana, the ritual we perform to celebrate these nine nights is called Bathukamma.

Bathukamma is floral festival celebrated by the Hindu women of Telangana representing the state’s cultural spirit. Bathukamma is a beautiful flower stack, arranged with different unique seasonal flowers most of them with medicinal values, in seven concentric layers in the shape of temple gopuram. In Telugu, ‘Bathukamma’ means ‘Mother Goddess come Alive’ and Goddess Maha Gauri-‘Life Giver’ is worshipped in the form of Bathukamma – the patron goddess of womanhood, Maha Gauri Devi.
Whereas in Bengal, clay idols of Goddess Durga are worshipped for five days and immersed in a river or pond on Vijayadashami (the fifth day). This is known as Durga Bisarjan or Bhashaan.
And in the recent times the public in Hyderabad has started adopting this Bengali culture as well. 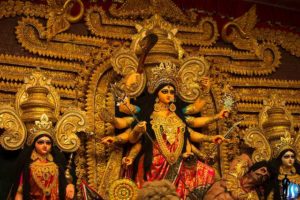 Hyderabad is a part of the Deccan Plateau. It lies on predominantly sloping terrain of grey and pink granite, dotted with small hills. This point makes it clear that we don’t get clay easily. Our sand isn’t clayey. And this point I have made in order to explain the fact why we shouldn’t try the “making huge idols” culture of Mumbai and Kolkata!  These two cities are geographically very different from ours. They have clay and sand available and thus can make eco-friendly idols of the Gods and Goddesses.
But these days, the one major thing we do to celebrate these two festivals is putting up pandals or temporary shrines and then place a huge idol of the God/Goddess and pray to it.This isn’t exactly wrong but there are many ways in which it isn’t right either.

As the commercial production of idols increased, earthen or “natural” clay (banka matti in Telugu) was replaced by plaster of Paris. Man-made plaster is easier to mould, lighter and less expensive than clay, but it is non-biodegradable (insoluble in water). The paint used to decorate the plaster idols contains heavy metals such as mercury and cadmium, which pollute the water. In addition, the non-biodegradable accessories adorning the idol accumulate in waterbed.

The most serious impact of the festival on the environment is due to the immersion of plaster-of-Paris idols in bodies of water. Traditionally, idols were sculpted from mud taken from nearby bodies of water; after the festival they were returned to their source, a cycle meant to represent the natural cycle of creation and dissolution.
The whole point of the festival, its actual symbolism is lost somewhere while we are busy partying and harming Mother Nature. 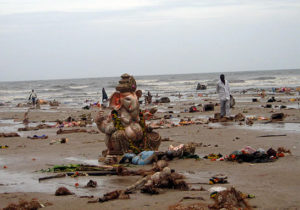 To conclude I’d like to say that as the future generation we must rethink about the ways of celebrating these festivals.

Start following a different trend and “BE THE CHANGE YOU WANT TO SEE”
Save the earth.
Be Smart.
Be safe.
Have a very Happy Dussehra!

“Hand me the gun and don’t move a muscle”, an injured Shankar Narayan whispers to his son, while they take cover under an old Contessa. The little boy does exactly as his father says, his hands trembling, desperately trying to... END_OF_DOCUMENT_TOKEN_TO_BE_REPLACED

Did your 8-year-old self ever wish for that awesome Pixar movie that you watched, and you watched, then you watched again, to be real? Because I did!  I had a dream. I wished I was a car so that I... END_OF_DOCUMENT_TOKEN_TO_BE_REPLACED

The scene opens in a jury room, where a decision is to be taken on the death sentence of a man accused of murder. After voting, each juror explains why they feel the accused is guilty or not guilty. One... END_OF_DOCUMENT_TOKEN_TO_BE_REPLACED

Ayrton Senna. A man whose legacy lives on to this day. Most modern-day drivers look up to him. He has won 41 Grand Prix in 162 races, has been on the podium 80 times, and has won the world drivers championship... END_OF_DOCUMENT_TOKEN_TO_BE_REPLACED