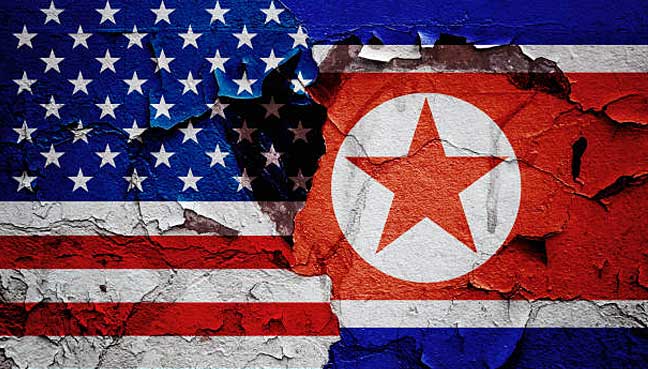 The conflict between North Korea and the U.S started way back in 1948 during the World War II. “Korea is called the forgotten war, and the part of what is forgotten is the utter ruin and devastation that was rained down on the North Korean people,” said a professor at Yonsei University in Seoul. The Korean peninsula was initially occupied by Japan and was later divided into a communist-backed north and an American-backed south at the end of World War II by the Soviet Union.

North Korea and the US have been at loggerheads ever since the US-backed South Korea in the Korean War. During the war, USA had dropped 635,000 tons of bombs on North Korea, not counting the 32,557 tons of napalm which resulted in a massacre and also the destruction of hydroelectric and irrigation dams, flooding farmlands and destroying crops. Ten percent of North Korea’s entire population was either dead or injured or missing, by the end of the war.

Since then, North Korea lives with a war-mentality, and this anti-American propaganda is war-time propaganda. From the earliest age, North Korean children are taught about “cunning American wolves” that committed mass murder during World War II. The USA has tried to cover its tracks, but North Korea remembers very well what most Americans have forgotten (or never knew), that the Korean War was a brutal one.

The Kim family has been ruling North Korea for seven decades now. It all began when the Soviets installed Kim Il Sung to lead them. Kim Il Sung was in power from 1948 to 1994. He was revered. There are monuments all over the country that sing praise to the “Great Leader” and the “Eternal President”. Kim Il Sung’s cult personality started to take root when he led the Soviet-backed invasion of South Korea, the dawn of the Korean War.

Since Kim II Sung’s death in 1994, his son and grandson, Kim Jong Il, Kim Jong Un have carried on his legacy, aiming to run the country exactly like he did.  Kim Jong Un goes the extra mile trying to govern like his grandfather did, for example, with public prosecution and dictatorship. Some refer Kim Jong Un as the “crazy-fat-kid” taking irrational actions to ensure his family’s survival.

Despite its many reforms, NKorea is still far, far behind from the rest of the world. It is ranked 215 in the poorest country index out of 230 countries. North Korea is solely reliant on China as a trading partner, with most of its money coming from its coal exports.

For years, North Korea has tried to develop nuclear weapons to defend itself from their enemies, as North Korea does not have great friends. The Kim family wants to sustain its hold for as long as it can and nukes do the trick. And now, North Korea has an intercontinental ballistic missile that is theoretically capable of hitting major cities in the US like Chicago, New York, Washington D.C, with a nuke, boldly daring anyone to seize his power and position.

North Korea appears capable- based on the much talked about 'test' that it has carried out- of firing long-range missiles that could reach the eastern seaboard of the United States. With this nuclear prowess, the tension between North Korea and the United States, without a doubt, has increased significantly.

If North Korea bombs nukes onto South Korea and Japan, it would make the American troops stationed there vulnerable. There are 25,000 American soldiers stationed in South Korea. The United States has decided to deploy Terminal High Altitude Area Defence (THAAD) system in South Korea to defend its soldiers against certain missile strikes and that is also why America is conducting missile interception tests with Japan.

But while the nuclear and missile programs get all the attention, a seriously underappreciated threat comes from North Korea’s arsenal of conventional weapons, including the world’s largest artillery force. And a third danger comes from the country’s elite special operations forces that could magnify the impact of a North Korean strike on South Korea.

Donald Trump taking office has certainly not helped to settle this conflict but rather, added more fuel to the fire. Kim Jong Un had made several statements about launching nukes onto the United States. The United States, under the presidency of Donald Trump, had been investing billions of dollars to increase its nuclear power so as to defend Airstrikes from North Korea. Meanwhile, China has been trying to settle this dispute in a diplomatic way as soon as possible.

Though North Korea has performed tests on its nuclear weapons, it’s still far away from full-scale military engagement. Given North Korean military's capabilities and readiness, any war, if it did break out, is likely to lead to devastating consequences for South Korea. Seoul, the South Korean capital, is well within the range of massed North Korean artillery.

Obviously, North Korea might have an initial military advantage, but considering the military strength of the United States and its allies, North Korea would almost certainly lose. But the level of devastation in both North and South Korea would be immense.

The best possible solution to this problem is only if North Korea agrees to give up its nuclear program. But that’s never going to happen. While US could still agree that North Korea has nuclear weapons capable of hitting the US. That probably won’t happen either. There is no easy way out and this situation has confounded presidents and skilled national security officials on both sides. The Trump administration’s current approach, according to a joint statement issued in late April by Secretary of State Rex Tillerson, Secretary of Defense James Mattis, and Director of National Intelligence Dan Coats, is “to pressure North Korea into dismantling its nuclear, ballistic missile, and proliferation programs by tightening economic sanctions and pursuing diplomatic measures with our Allies and regional partners.”

In an interview with NPR, Tillerson put it more bluntly, stating that the goal is “a denuclearized North Korea” by way of a negotiated agreement. They’ve tried this before, and it hasn’t worked yet. This is essentially the same policy the Obama administration pursued for the past eight years, to no avail. Indeed, America and others have been trying to come to some sort of negotiated agreement with North Korea since 1985.

The hope is that Trump’s administration strategy will lead to a diplomatic solution. If this doesn’t work, the North Koreans still have nuclear weapons to hit the US. Then the only option that seems available on the table is a military strike targeting North Korea’s nuclear facilities. In blunt words, this means war.

“THE SWAT TEAM BURST IN. THERE WAS CURTIS GREEN COVERED IN COCAINE AND FLANKED BY TWO CHIHUAHUAS” ~The Untold Story of Silk Road by WIRED In early 2011, law enforcement agencies were caught with their pants down when drugs began... END_OF_DOCUMENT_TOKEN_TO_BE_REPLACED

Police sirens, an opened door, a step out of the flat that had been an abode and a prison for 6-years-9 months-23 days—freedom at last?   Julian Assange was under no such false impression as the British police dragged him... END_OF_DOCUMENT_TOKEN_TO_BE_REPLACED

From a very young age, we are socialized to behave according to our sex. Boys are taught to be “masculine” and girls are taught to be “feminine”. But are there any biological differences between a man and a woman which... END_OF_DOCUMENT_TOKEN_TO_BE_REPLACED

[Trigger Warning] The following reading contains events of death. **This is entirely a work of fiction and no distress was intended for any family/person affected by a natural disaster. “Please Ma!” Arya pleaded. “I made it to my final semester.... END_OF_DOCUMENT_TOKEN_TO_BE_REPLACED

[Trigger Warning] The following reading contains potentially distressing information about self-harm. The reader is advised to use their discretion to continue reading.   Darkness cocooned her room, her heart twisted, churned, her fingers closed around her throat, nails digging into... END_OF_DOCUMENT_TOKEN_TO_BE_REPLACED