An interview of Krish 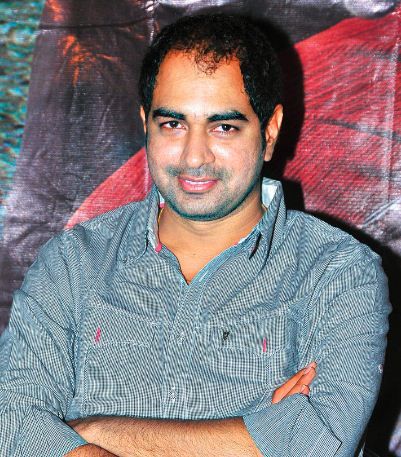 An interview of Krish the Director

Radhakrishna Jagarlamudi, born on  10 November, 1978, also known as Krish is an Indian film director, in the Telugu film industry. He made his directorial debut in 2008 with Gamyam starring Sharwanand, Allari Naresh, followed by Vedam in 2010 starring Allu arjun and Manchu Manoj. Both films garnered a huge response at the box office, fetching him the Nandi Award and Filmfare Award for Best Director. He has also directed Krishnam Vande Jagadgurum starring Rana Daggubati and Nayantara which has also been a success at the box office. He makes films in such a way which leaves an underlying message and in turn has an impact on the society.

1. Tell us something about  your experiences and your way of life as a child?

The earliest days of my life were very exciting, I was very lucky to be a part of a family who have shown immense love towards me. I was very close to my brother, I would share each and everything with him, every evening we would bimble around the park and discuss so many things, he would narrate many short stories from books like “Chandamama” and other story books, most of the stories were related to Indian mythology which have inculcated lots of moral values and more over carved out a new angle in my creativity side and I have developed the art of writing, reading and sketching. I was fond of reading books, novels, in fact I would read each and every book with lots of interest. I had wonderful friends, I’ve learned many things even from them. I’m thankful to god for giving me  a  wonderful family and  friends. I cherish every moment spent with them.

My life as a student was very thrilling and electrifying. We were three friends, Suresh, Srinivas and myself. We were very crazy about films. I remember, on the release date of some films, we would stand in long queues to watch our favourite films. Some of them were ‘Gitanjali’, ‘Sagara Sangamam’ and ‘Roja’. Once I reached Intermediate, I had wonderful friends like Satyanarayana(Satti) and Vinod. Together we bunked classes, watched movies and participated in other activities. We were well known as the ‘3 Musketeers’. As a student, college life proved as a platform for me to explore my artistic skills. I was inclined towards Script writing which has eventually became an added bonus to my career.

I went on to do Masters in New Jersey. Here I took part in many activities, Indian Cultural activities being predominant. I had continued to write short stories and in the year 2002, I had started writing stories in a specific format. I used to share these stories among some of my friends and then one of my friends insisted me to take on writing as a profession.

Here, I was in a dilemma. I had to complete my Masters, I have questioned myself many times. I soon realized that there were too many hurdles in the process of film making, right from paper work to execution.

After completing my Masters, I returned to India. I then proposed the idea of film making to my parents. Initially they were a bit apprehensive about it, but they eventually agreed. I started working on my first script ‘Gamyam’. I knocked the doors of many notable producers, only to find myself in vain. Finally, I got support from my father (Jagarlamudi Saibaba),my brother-in-law (Bibo Srinivas) and my friend Rajeev Reddy.This was how I achieved my first success when “Gamyam” garnered huge response.

4.  How was your experience as a debut director?

In the making of my first film ‘Gamyam’, I faced almost all the difficulties one could possibly face while making a movie and at one point of time it was even difficult to go further ahead.However the script was the biggest saviour and provided us the strength to withstand all the hurdles.

5.  Your take on life and society?

So far I have three films to my credit ‘Gamyam’, ’Vedam’, ‘Krishnam Vande Jagadgurum’. All the three films had an underlying social message which I wanted to convey. “With the society” through Gamyam; “what is society” through Vedam and “there lies a society within each one of us” through Krishnam Vande Jagadgurum. In future also, I intend to make films which would have an impact on the society, without losing its commercial flavour.

6. Your views regarding Awards?

I received Filmfare awards for Best Director for both ‘Gamyam’(2008) and ‘Vedam’(2010). However awards do not determine the success or failure of a person but they do act as pat on my back for the work I’ve done. I think drafting a good script, making a good film, garnering huge response from the audience is also important for gratifying a film maker.

7. Did you reckon any difference between Tollywood and Bollywood?

8. What’s your message to the newcomers in the industry?

On rare occasions I watch  few short films, I can undoubtedly say that there is lots of talent hidden in them (i.e, filmmakers,actors). The only advice I can give is you have to develop the art of reading books. You need to become a book worm. Read novels, short stories, basically creativity starts from there . Develop passion for writing,reading, basically understand the story, thoughts will start flowing automatically .  At the same time I wanted to remind you that this industry is all about knockout game, you need to have a good script if you want to make a good film but as of now I would say to “concentrate on your education” and then explore the talent. That’s all I have to say.

9.   What was your best moment in the tollywood film industry till date?

Seven years ago,on February 29th(2008),the leap year, was the release date for the movie ‘Gamyam’ and a day before the release date, it was the ‘premier show’,  the movie was screening and almost everyone was present in the hall,like  artists, technicians, crew, direction team, production team and other popular faces in the film industry. I was a little jittery on that day, goosebumps started appearing. Everyone was watching and I was very positive about the response of the film.After the climax, I could hear the sound of the first clap by a person from one corner and then all of sudden everyone  started  clapping together. Few were asking “Where is the \Director?”, Few other “Who is the Director?”.

I was sitting on the other corner in the last row of the hall. I was elated by their overwhelming response. I was eager to know their response. Everyone was congratulating me. I felt honoured that day. I relish that moment it was one of the best days of my life. That was all on that day and later the movie has garnered a widespread response at the Box Office.The movie has won many awards and was critically acclaimed.That was a great kickstart to my career.

Basketball is special. The lack of protective gear and condensed size of the playing court allows fans to have the most intimate experience of a team sport that exists. Thanks to the distinct play styles, basketball allows players to develop... END_OF_DOCUMENT_TOKEN_TO_BE_REPLACED

“And medicine, law, business, engineering, these are noble pursuits and necessary to sustain life. But poetry, beauty, romance, love: these are what we stay alive for” - Dead Poets Society (1989) When I first watched Dead Poets Society close to... END_OF_DOCUMENT_TOKEN_TO_BE_REPLACED

As you read this, picture yourself back in the 1970s. You would be getting ready to catch your college bus as golden rays light up your open veranda. Your grandpa would be strolling on the balcony reading the newspaper. Everyone... END_OF_DOCUMENT_TOKEN_TO_BE_REPLACED

Every time my dad and I go on a long drive, we always tend to have serious discussions that range from my career choices to a wrong selection in the Indian cricket team for an important match. On one particular... END_OF_DOCUMENT_TOKEN_TO_BE_REPLACED

Ping! Sound familiar?  That's the sound I woke up to every day, ever since I got my first mobile phone at thirteen. Of course, technology has come a long way. But at least I did not have to ask a... END_OF_DOCUMENT_TOKEN_TO_BE_REPLACED