Apophenia /æpɵˈfiːniə/ is the experience of perceiving patterns or connections in random or meaningless data.

The need to seek patterns is wonderful, as it is in essence responsible for us coming up with the laws of physics,mathematical theorems, understanding the patterns in biology-plant and animal behaviour.
But when it extends to seeing patterns in things not inter-connected,or more simply seeing patterns you cannot convince others to see,it becomes closer to the definition of schizophrenia.

Hence,I am going to do my best to convince you that object oriented programming is similar to the capitalist strategy and structural programming is more of a socialist strategy to computing.
Because it would be terribly unfortunate to be diagnosed with a mental disorder (officially)
OOP is popular because its more applicable to real-world scenarios.
Objects that have Inheritance, Polymorphism abstraction and many other features quite similar to the real world.
Q.E.D.( Quod Erat Demonstrandum-“which had to be proven”) 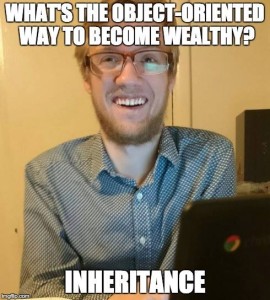 Inheritance-Wealth, Property, Name & Fame
Polymorphism-Black, white and the whole spectrum of money(yes,the much sought out green paper takes many forms)

Abstraction-Our knowledge of the economy-we know that it makes the world go around-but not exactly how or why.

And since we are comparing it to such a monetary model,we might say that OOP is quite the capitalist notion going for it.
The objects are isolated, have attributes-social standing
And functions-something to make money with-a business etc.
Each “class” is self-involved and sometimes self-sufficient.
It can survive and sometimes even thrive without the main. Rather the main takes a leaf out of the class’ repertoire and instantiates objects to get its work done.
Division of labour while everyone is looking out for themselves and providing the very coveted illusion of “freedom”.
So,if you are sufficiently convinced that the OOP methodology, in some very slight sense resembles what in essence is capitalism.

Then perhaps you may even see the similarity between structural programming and socialism.
The fact that it is methodologically based,not intuitive or bringing in the money.
So as to say -following the rules, step by step execution.
The overall good of the program, regardless of how slow the progress may be or the lack of certain very important features that will certainly cut down coding time and increase productivity.
Single entry and single exit,no access specifiers limiting the resources from the “main” i.e. govt.
Everything works for the main, and in it lies the overall execution of the program.
The overall good of the functions.

Just like a novice programmer is ecstatic when he finds that he can declare and initialize the variables anywhere in the program and not in the start of the main like C.
A person might feel the freedom of capitalism allows for entrepreneurs and small businesses and other enterprises to start whenever and wherever.
But, if the novice programmer were to come to the conclusion that Java was for all accounts better than C.
He would be highly mistaken for if it were so, then a majority of all the Operating Systems(Administrative Processes) wouldn’t be programmed in C.
While many might agree that OOP is definitely much better for programming like capitalism there are certain social trade-offs or rather design trade-off’s we are making in the process of getting things done (The greater good of the nation,and the people that comprise it being sidelined for higher GDP’s and Bragging rights).
So, the optimal solution would be somewhere in between OOP and Structural programming, I assume based on this absurd bout of apophenia.
People came to the same conclusion when it comes to socialism and capitalism.
“Socialism is not only a way of life, but a certain scientific approach to social and economic problems.”
Jawaharlal Nehru
VS.

“Despite a voluminous and often fervent literature on “income distribution,” the cold fact is that most income is not distributed: It is earned.”
Thomas Sowell

With my limited understanding of economics,I have come to a weird conclusion that the Modi Govt. is taking us from a very stagnant pseudo-socialist nation,to somewhere along the lines of a capitalist country.
Starting with the “Make in India ” campaign.
#Facebook recruitments taking place through GATE examinations…
Gives us an overall understanding,that what has been so far hasn’t exactly drowned the country, yet it hasn’t quite taken us farther than where we started from.

“What business has science and capitalism got, bringing all these new inventions into the works, before society has produced a generation educated up to using them!”
Henrik Ibsen quotes

I quite agree this is what is happening or has happened with our generation.
We are not quite socialist nor quite capitalist.
And this is the basic paradigm shift of intellectual property.
What you have can be shared,only if it is your wish.
In the coding community we have the socialist coders-the developers of Open Source Softwares and freewares.
Then we have huge companies that have taken a capitalist route to their coding nuggets of wisdom and made a killing out of it.
Then we have the biggest philanthropist who will soon win a Nobel Prize for his efforts because he is quite literally converting his intellectual property into quantifiable assets that he is using to help the world.
-If you haven’t guessed already its Bill Gates.

So I guess, that the balance between socialism and capitalism might work for the country(dare I be optimistic) just like the combination of structural and OOP has given us Java-the ubiquitous language.

Or perhaps this question is moot with the information age,and new economic theories or models need to be developed to characterise what we are seeing worldwide.

Hope was an absurd emotion.   It was a chilly midnight when it happened for the first time. Monique was a light sleeper. After all, it didn’t take much more than a dull, heavy thud for him to jolt awake... END_OF_DOCUMENT_TOKEN_TO_BE_REPLACED

[Trigger Warning] The following reading contains potentially distressing information about violence, brutality and sadistic practices. The reader is advised to use their discretion to continue reading. “For the last time, you don’t have to do this. They will finish the... END_OF_DOCUMENT_TOKEN_TO_BE_REPLACED

[Trigger Warning] The following reading contains events of death. **This is entirely a work of fiction and no distress was intended for any family/person affected by a natural disaster. “Please Ma!” Arya pleaded. “I made it to my final semester.... END_OF_DOCUMENT_TOKEN_TO_BE_REPLACED

The corporate industry is notoriously famous for having the highest pay grade difference for employees working in the same company at different levels doing the same or similar jobs. This difference attracts several young engineers and management graduates into this... END_OF_DOCUMENT_TOKEN_TO_BE_REPLACED

“THE SWAT TEAM BURST IN. THERE WAS CURTIS GREEN COVERED IN COCAINE AND FLANKED BY TWO CHIHUAHUAS” ~The Untold Story of Silk Road by WIRED In early 2011, law enforcement agencies were caught with their pants down when drugs began... END_OF_DOCUMENT_TOKEN_TO_BE_REPLACED