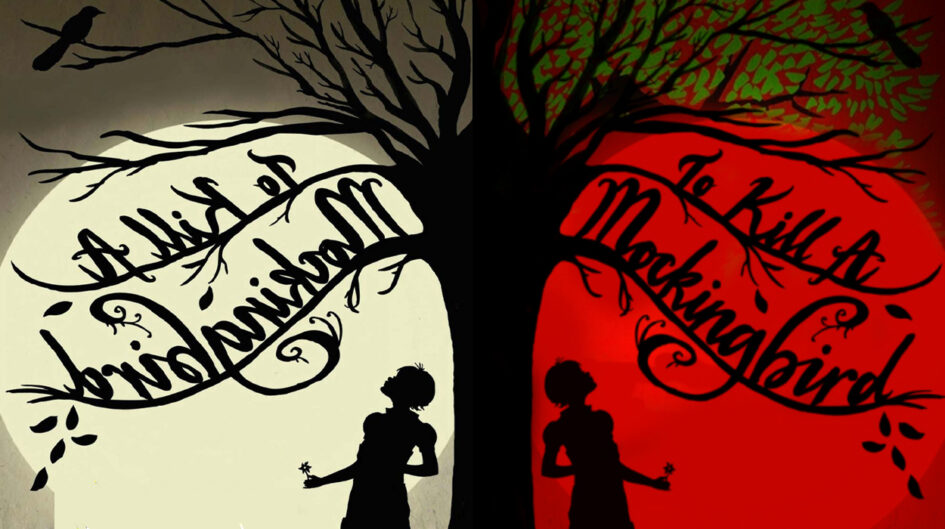 Miss Caroline said, “Well done, Scout!” as she saw Jem and me leaving the theatre. I signaled her a thank you and started walking home with Jem. We had a lot of fun and a tad bit of discomfort walking because of my ham costume. We could hear spooky sounds on the way, so we hurried.

As we were walking through the woods, a person suddenly popped up.

Ewell, walking towards us wielding a knife, made us freeze. We buried our faces in our hands and began to back away.

We started running for help as he chased us.

When he tried to grab Jem by the arm, Boo appeared and threw him to the ground. Boo and Ewell engaged in a battle as everyone gathered around. Before we could comprehend Boo’s actions, the police arrived and arrested Ewell. Everybody realized that Boo was a good man and always protected us. We thanked him for saving us from Ewell.

Jem asked Boo if we could become friends. He gave us a pleasant smile and walked us home.

We invited Boo to have dinner with us. He appeared to be an ordinary man, and I was amazed that he could be such a normal person after being locked up for so long.

That night, Jem and I could finally sleep peacefully.

Atticus and I, along with Jem, visited Mayella the next day. She expressed that in her heart of hearts, she hoped Atticus Finch had proven that Ewell, not Tom, had beaten her and that she feels terrible for Tom’s death. Mayella expressed that she does not want her father to return from prison.

We consoled her and assured her that we would always help her and her younger siblings.

After a week, Ewell was able to obtain bail by promising to be a decent guy through the support of his community. This news made Atticus reconsider our family’s security as Ewell would plot something to attack us again and abuse Mayella.

The next day, Ewell’s death was a heated debate in the Maycomb community. The court closed the case by stating that Mayella killed Ewell as an act of self-defense when we came onto her sloshed.

After a month, Mayella finally opened up about Tom and the trial with the Maycomb community after Ewell’s death.

While Mayella was gathering the courage to start a business for the future of her younger siblings, Ewell reappeared to become a nuisance. Enraged Ewell arrived at their house and started abusing Mayella as Atticus tarnished his reputation. He started drinking and made the entire house messy.

That night, Mayella devised a plan to murder Ewell, as retaliation for the abuse she suffered at the hands of him.

Mayella had doubts as she contemplated what she was planning to accomplish. She took a knife and thought about her and her younger sisters’ future as she moved towards her father. She recalled all of the abuses he had committed against her. She assured herself that she’s a brave woman for handling her younger sisters by living with an abusive father all these years. She pushed the knife into her father’s chest while all of these thoughts flashed through her mind. His eyes popped wide, and his breath slowly faded away.

Tom is a black man, and nearly everyone believed that Tom was guilty, which gave the case a lot of realism. People would rather kill an innocent black man than think a white father would intentionally harm his own child.

When Mayella fell in love with a black guy, she defied all social norms. This phenomenon wasn’t unique just to her. Mayella shouldn’t be forced to lie and protect her family’s reputation by destroying innocent people like Tom. Tom went through dreadful situations in which society must be held accountable. Society is answerable for justifying Tom’s death and Mayella’s feelings until social constructs collapse and end racism.

The trial was a wake-up call that times were changing, and looking back, it all happened because Atticus didn’t care about Tom’s skin color. I finally realized what he meant when he told Jem and me that killing a Mockingbird was a sin.

After all, every Mockingbird exists for a reason, and each sings for the joy of others.

– Inspired by the novel “To kill a Mockingbird” by Harper Lee

Ayrton Senna. A man whose legacy lives on to this day. Most modern-day drivers look up to him. He has won 41 Grand Prix in 162 races, has been on the podium 80 times, and has won the world drivers championship... END_OF_DOCUMENT_TOKEN_TO_BE_REPLACED

Two things have always fascinated me as a child- words and crosswords. Which word should I say? How do I say it? Can it, in its barely ten letters, hardly three syllables, carry the whole meaning of what I want... END_OF_DOCUMENT_TOKEN_TO_BE_REPLACED

Many of us might look back at the time we spent in school with nostalgia and fond memories. But most will also agree that it wasn't the happiest of places with long and monitored study hours, heavy bags full of... END_OF_DOCUMENT_TOKEN_TO_BE_REPLACED

The scene opens in a jury room, where a decision is to be taken on the death sentence of a man accused of murder. After voting, each juror explains why they feel the accused is guilty or not guilty. One... END_OF_DOCUMENT_TOKEN_TO_BE_REPLACED