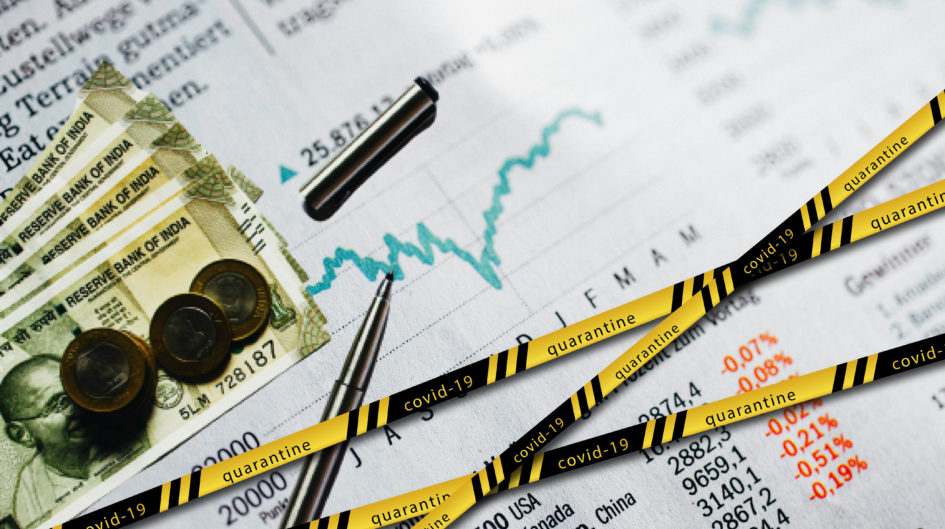 “Global shares take a hit – Big shift in stock markets, where shares in companies are bought and sold, can affect the value of pensions or individual savings accounts (ISAs).” — BBC News

“Consumer confidence collapses in May, the economy may contract by 1.5% in FY21: RBI surveys” — ET News

“From an economic perspective, the key issue is not just the number of cases of COVID-19, but the level of disruption to economies from containment measures.”–Ben May, head of global macro research at Oxford Economics.

The above-mentioned headlines are a few of the many we’ve been hearing almost every day in the last few months. While most of the world is focussed on the social aspect of how the pandemic has affected us, we cannot, however, overlook the economic downfall caused by it. Although we might be under the assumption that changes made to the global economy wouldn’t affect us directly, it affects our way of life. Hence, to completely understand these changes, one must first understand the functioning of the economy.

In simple terms, economy is defined as the management of available resources for the functioning of a state, or country. It revolves around the concept of production and consumption of goods and services and the supply of money. The standard of living generally depends on the country’s ability to produce goods and services. A demand and supply pattern is followed here wherein if there is an increase in the demand of a product then the supply chain also needs to increase. The equilibrium between the demand-supply curve is what helps the market stay afloat.

However, the situation in recent times has caused an imbalance in the global market. What started as a flu outbreak in a small city in China, has become a crisis that is wreaking havoc worldwide and has brought the entire mankind to a standstill.

China’s, the world’s largest manufacturer, halt in industries has caused a demand-supply imbalance. The pandemic has proven to affect the masses not just physically and mentally but also their economic way of life. Here’s how it has affected the important aspects of the global economy.

Impact on the Global Market

Despite having a low mortality rate (4% of the global average), this pandemic has shaken the entire world with its alarming contagion rate, exponentially spreading across over 190 countries in a short span of just six months.

Oil and other natural resource markets have taken a major plunge due to the pandemic. Large government and private sectors are not the only ones to be impacted due to the virus. The list goes on. Hospitality sectors and other medium and small scale industries and markets are also on the list.

The coronavirus shockwave has hammered global stock markets resulting in a downfall of estimate across all industries. According to the sources at BBC News: “Since February 20, global markets have shed about US $15 trillion of wealth; with every major stock index, on average, suffering a cut of roughly 20 percent to 30 percent. The Dow Jones Industrial Average (DJIA) along with other prominent indices has witnessed multiple lower circuits during this time.”

While the crisis has taken a heavy toll on life today as we know it, economies around the world have just started to tally the huge collateral damages. Major multinational banks such as Goldman Sachs have estimated that this period would be equal to or worse than the global financial crisis of 2008.

A majority of companies have decided to layoff their employees which in turn flames the already existing unemployment problem. This is an issue that wasn’t necessarily caused by the pandemic, instead triggered by it. This is much worse in countries with huge populations like America, China, India where most of the youth are now without jobs.

In smaller sectors where the people work on fixed wages and daily incomes, they are now without jobs and are forced back to their cities as they cannot make ends meet. The pandemic has resulted in affecting the small-time business owners more than the high-end companies.

Impact to Economy through the ages

The Great Depression in the late 1920s was caused due to a loss of trust in the American economy which resulted in the disastrous Stock Market Crash. The global recession of 2008 was caused due to several companies declaring bankruptcy and due to unsuccessful bills being passed. Economists, with prior knowledge, gained from major events like these, have always been able to predict trends. But it has been a challenging task for them as this recession is a bit different from the rest. It has been triggered by a pandemic that has never been experienced before. Hence it could take more than just a few years to fix this situation. But we need to remember, that saving lives and saving livelihoods must go hand in hand with stopping the pandemic.

However, not all hope is lost. Studies have shown that after every stage of downfall in the economy, there has been a substantial boom by implementing the right measures. So it is up to all individuals to help build back the economy and rise above the present situation. Humans have always proven to be adaptable, from surviving the Ice Age to the Black Plague and even World Wars. Thus proving that we are capable of finding a way through the crisis and hopefully surviving this pandemic.

Now that the Diwali season is finally here and so are the celebrations and parties of the season, it’s time for you to be in your ethnic best and make a few heads turn. Here are a few tips that... END_OF_DOCUMENT_TOKEN_TO_BE_REPLACED

Keshav Memorial Institute of technology what we fondly call KMIT, in all its glory is loved by all of us. No matter how unsure you are of it in the beginning, it will show you reasons why you were wrong.... END_OF_DOCUMENT_TOKEN_TO_BE_REPLACED

Welcome to kMITRA, a monthly online magazine about all things KMIT and beyond. Far from being a regular college among many, KMIT has carved a niche for itself. As its students, we wanted to contribute to it while creating a... END_OF_DOCUMENT_TOKEN_TO_BE_REPLACED

Reserve the quietest reading nook in your house people because the KMIT book club is in town. We've got classics like Hitchhiker's Guide To The Galaxy for the science fiction afficionados out there. To Kill A Mockingbird for the social... END_OF_DOCUMENT_TOKEN_TO_BE_REPLACED