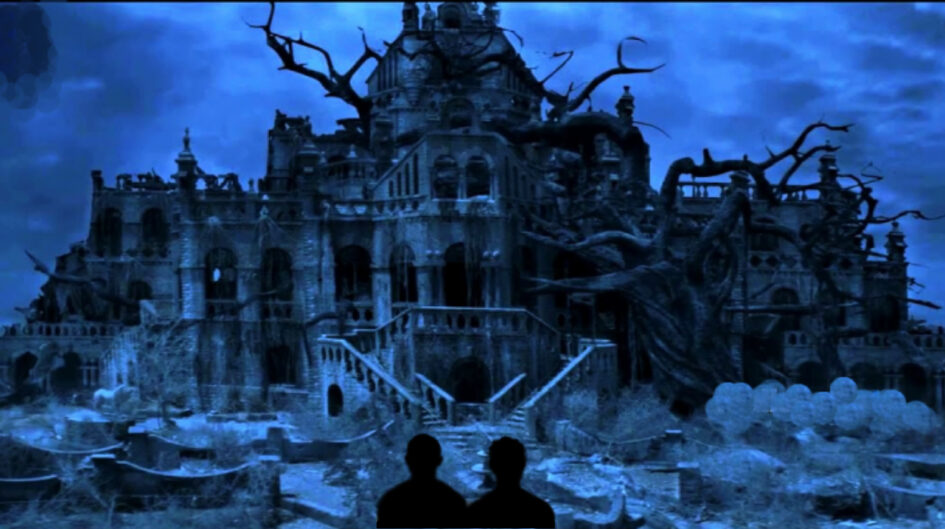 As the night grew darker, enveloping an empty street with mystery and fear, it embraced two college students, Matteo and Ace. Drunk and floundering into the dark alley, they hadn’t realised how far they had wandered until they came across a ghoulish mansion that stood proudly, with sneaky shadows and broken windows with ripped curtains. Strangely enough, it looked older than the rest of the neighbourhood, almost like it had sunken into a disgusting slumber until the suburbs had grown around it.

“The Posthumous Manor. No trespassing,” read the nameplate behind the cobwebs. ”Oooo, spooky manor ahead, I wouldn’t be surprised if you wet your bed today”. Matteo just rolled his eyes but turned serious as Ace started to choke and made a gagging face at Matteo. “Quit screwing around, man!,” Matteo whined. Ace burst out laughing.

Although he couldn’t help it, Matteo did not want to look like a wuss in front of Ace. “Let’s go check it out then,” he said, with the little liquid courage he was left with. “You don’t say!” Ace grinned and put his arm around Matteo and led the way. The old manor stared back at them, ready to swallow them as they walked through the overgrown grass in the front yard. They kicked the front door open. The villa was dusty and had a metallic smell, but apart from that, it was so beautifully furnished that they lost themselves in it. The peace, the echoing halls, old, torn portraits hung on the walls, the hanging chandeliers, the artefacts gave it a royal and religious structure that their angst turned to awe. But their curiosity widened enough for them to reach every corner and look for something wrong. They reached the end of the main hall, and as though responding to their suspicion, there was a shrine engraved in Latin, with the most prominent writing of them on a soiled wooden crate at the center. Ace, who was a Latin major, deciphered it, ‘Qui occurerit, maledictus erit…’,

Thou who shall come across this shall be cursed with evil like no other, no matter how good or pure the victim is.

And before he could even produce a response, Matteo opened the crate. To add to the presence of the devil, inside was a skeleton with its skull cracked open. There were claw marks on the coffin as if the skeleton was buried alive and died escaping. Playing with fear was not fun anymore. The manor was not so lifeless anymore. Matteo and Ace fled before their sanity did.

Not a soul was in sight on their way home. It was a tiresome journey from the Posthumous Manor, and Matteo just wanted a shower and a good night’s sleep, ghosts and curses be damned. Despite their dreadful escapade Ace looked like he had taken a stroll to Starbucks totally unfazed as opposed to the former. Matteo swore at their foul odour as he walked into their house and quickly rushed to take a shower. He was so occupied with the stench and getting home he hadn’t noticed how eerily quiet Ace had been since their escape.

Matteo grew anxious and had an uncanny feeling that they were not alone and were being watched by something ancient and evil, although he couldn’t quite put a finger on what. He couldn’t let go of this sense that they had done something awful and that they were going to pay a steep price for it.

He  blamed it on his nerves, he did not want to look like an idiot in front of Ace. As he was changing into some dry clothes, the lights went out. Only then did he notice how quiet the house was.

It was a dark and foreboding silence, so quiet his ears actually rang, he walked out of the washroom only to be greeted with a pitch-black void and that revolting scent that followed him from the manor. ”Ace?” he called out. Only silence greeted him. ”Ace it’s not funny anymore man!” he chuckled with a confidence that did not match how he actually felt.

“Ace, come on man you win, great prank seriously just sto-“. Then he felt it, he could sense something watching him, something ancient, atrocious, full of hate and malevolence, something that most definitely didn’t belong here. He prayed it was his mind playing tricks on him, the hairs on the back of his neck stood, as he called out for Ace one last time. He felt someone- no, something breathe down his neck and he stilled. His blood turned to ice and he turned around ever so slowly not wanting his worst fears to come true and what he saw knocked out his breath. He jerked back and opened his mouth to let out a blood-curdling scream that reverberated in the entire room. What stood before him was something that should be buried deep underground, something that didn’t belong in the world of the living, most certainly not in the middle of his hall. He didn’t remember the last time he had been so afraid, so helpless, every single coherent thought flew out of his brain, it was only due to his pure instinct and fast reflexes that even he didn’t know he had, that he barged out of the door screaming into the night.

Ace chuckled as he stared at Matteo’s retreating figure from the window, heck an eight-year-old could scare him, pair up a pale white dress, a wig, and voila-a prank that he would never let Matteo live down. He whistled chirpily as he walked to his room, blissfully unaware of the alabaster entity that had been watching him with hollowed black eyes and inky-black blood trickling down its face.

Growing up watching Sci-fi movies, I always imagined myself living in a fully automated world with all these cool tech devices- flying sneakers, teleportation units, and whatnot. Something as dreamy as the “first cognitive city” proposed to be built in... END_OF_DOCUMENT_TOKEN_TO_BE_REPLACED

“How long are you planning to cry and sleep in here?” I asked her, as I raised the blinds in her dark bedroom. Seeing the chocolate wrappers and empty Ramen cups spread across the room, I couldn't help but sigh.... END_OF_DOCUMENT_TOKEN_TO_BE_REPLACED

Police sirens, an opened door, a step out of the flat that had been an abode and a prison for 6-years-9 months-23 days—freedom at last?   Julian Assange was under no such false impression as the British police dragged him... END_OF_DOCUMENT_TOKEN_TO_BE_REPLACED

The corporate industry is notoriously famous for having the highest pay grade difference for employees working in the same company at different levels doing the same or similar jobs. This difference attracts several young engineers and management graduates into this... END_OF_DOCUMENT_TOKEN_TO_BE_REPLACED

“THE SWAT TEAM BURST IN. THERE WAS CURTIS GREEN COVERED IN COCAINE AND FLANKED BY TWO CHIHUAHUAS” ~The Untold Story of Silk Road by WIRED In early 2011, law enforcement agencies were caught with their pants down when drugs began... END_OF_DOCUMENT_TOKEN_TO_BE_REPLACED